Boreas is doing all the hard work., 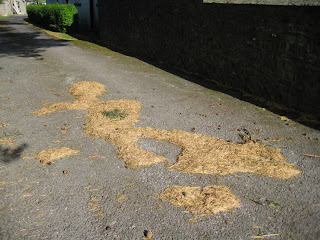 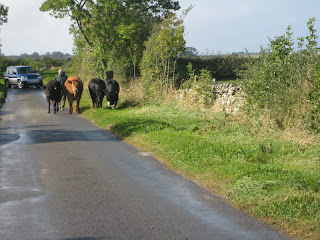 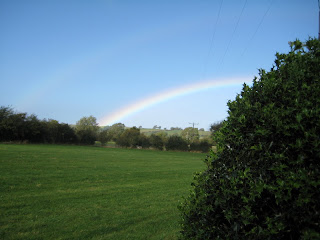 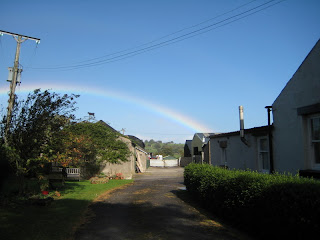 I read of an old man who didn't sweep up the leaves in Autumn. When asked why he didn't tidy up his garden he replied that there was no need. If he left them where they lay then sooner or later Boreas would do the job for him. Boreas being a name for the North wind.
Well today Boreas's cousin, the West wind, is doing a pretty good job on the pine needles on our drive. Over the last fortnight they have been thick on the ground. Today there is a huge west wind and it has swept them into a manageable pile. The trouble is that it is such a strong wind that it is almost impossible to keep one's balance - I am trying to stay indoors. But there are compensations. Every few minutes a squall of rain passes through and five minutes later there is a rainbow.
But this strong wind led to a minor crisis this morning when it blew a field gate open and four young heifers got out. To get to the road they must have passed the kitchen window as we were breakfasting, but did we see them - no. I was doing The Times crossword and the farmer was reading his newspaper. The ground is so hard after a month without rainfall so that their hooves left no imprint and they kept to the grass verges so that they didn't leave a single identification cow-pat!
I rang the police to report them missing and they told me that someone had reported four heifers loose on the main road. So for most of the morning the farmer and I drove round looking for them. All our neighbouring farmers were on the lookout too but no sign. We came home, had a cup of coffee and set out again up the lane. Where the lane joins the main road I stopped for the traffic and there - opposite - in a field - were the naughty four. Some sensible person had opened the gate and herded them off the road and into the field.
The farmer and our neighbours went to get them - the neighbours held up the traffic while the farmer herded them out onto the main road. And would you believe they refused to cross the white lines painted down the middle of the road! But eventually they trotted back down the lane like naughty children, not hurrying and stopping now and then for a nibble at some tasty looking leaf in the hedgerow. They are back in the field by the kitchen window now, looking a bit shamefaced.
But the weather - this wind - is causing havoc here with branches down on the roads. In our little town it is almost impossible to walk without leaning into the wind. I am staying at home. The garden is looking pretty sorry for itself - and that reminds me of another story. My mother used to speak of an old lady in our village who kept the most pretty cottage garden; she had a mixture of vegetables and flowers all neatly in rows and never a weed to be seen. One day the vicar called to see her and complimented her on the beautiful garden. "Isn't it wonderful what God can do in the garden?" he asked. She replied, "Well I don't know about that vicar - all I can say is you should have seen this garden when God had it to himself!" Have a lovely weekend.
Photos: Farmer bringing home the naughty girls.
West wind has swept up the pine needles on the drive.
Two halves of the same rainbow in the north.

Heifers on holiday -- love it! Glad they got back home safely. Loved your mother's story, too. :)

Hold on to your hat! Glad you got the girls back. I can just see them creeping past the kitchen window! (Didn't know about Rhum being on the telly last night).

The pile of pine needles looks like a big rabbit sitting there in the drive to me. Those naughty heifers. They were out to see the world.

Aren't animals wonderful? Cows and horses are so creative in escaping for a bit of time on the town. My gelding used to wait until I left for work and then he would break out. Neighbors would call me and I'd have to drive home to catch him and put him away. Mystery was that we could never find any breaks in the fence. One Saturday the mystery was solved as I watched out the kitchen window, he opened the gate latch with his teeth and trotted out! Needless to say, I began locking all the gates. I do miss that horse.

Glad you got the girls back and loved your vicar story.

Oh Weaver, have you brought back memories of naughty cows getting out. I think it is every farmers nightmare. I was usually home alone when they managed to escape, and in my time we didn't have cell phones to call for help. Not a fun time.

I love the rainbow pictures. Rainbows are such beautiful things, I just can't seem to get enough look and see when they are out.

I love the story of the old lady and her garden - I know how she feels! Glad the heifers got home safely - what a worry for you. I love it when we are held up for cows going for milking. As you say, they don't hurry, stop for a mouthful of grass here and there and then snuffle at the car windows with not a care in the world. Of course, if we are in a hurry it is a different tale! Hope the wind will soon die down and there won't be any damage done. It's just very blustery here and we are watching rain laden clouds pass us by most of the time. Love your rainbow.

Lovely post, Weaver, a really enjoyable read, especially the tale of the heifers escaping under your very noses!
Wind pretty stiff here too, but as I purchased two 99p kites in the shape of octopi (uses?) on Thursday we had a pretty good day of it.
However, whilst we were having afternoon tea in the Church Hall afterwards (fabulous, if you're passing, but only on till Oct 17th) a large branch came down and fell on a car.

As I may have said before, I look at my garden in disbelief. It has been left largely to God since the twins' arrival, and whilst He may love it, I'm not so sure.

Dear Weaver, your blog is one of the best for me, the best of all for the photos, that rainbow is marvellous.
I have always thought that heifers' naughtiness is in their DNA, but I love the quietness they inspire.

Thank you for your comment on J.C.Oates.
I think the Bucintoro still exists.

At the breakfast table Charles and I were remarking on the great number of leaf blowers for sale at Canadian Tire, - not a word about Boreas though; the best of them all.

Enjoyed your story of the naughty heifers, and thank you for your comments on our errant sheep, Weaver.

I'm with the old lady about Gardens too, - sometimes when I look at the garden at the end of the summer though I think that the Lord has the upper hand.

Weaver - great stories present and past!

Such excitement trying to get your naughty heifers back home - and in what sounds like almost gale force winds! Could have been a dangerous situation.

Fall is always a busy time for us because we have lawns throughout our woodland property and so there is much work to be done once the trees all shed their leaves. The winds just seem to whip them around and they all end up here. The municipality has recently passed a law against burning leaves so getting them into bags or hauling them away is quite the ordeal. We have succumbed and are now paying to have it done to save our aging backs.

Your vicar story shows how often god gets the glory for what goes right but humans are charged with what goes wrong . . .

Ooh, I do love these type of stories, with naughty heifers and laneways and traffic being stopped.

What an eventful post Weaver. Those naughty heifers!! Fancy them wandering past your kitchen window too! lol. At least they are back where they should be. I saw the weather last night and it forecast such strong winds for you. It was quite windy here overnight but worse for you I think. I hope it's better tomorrow.

That is so much fun! What a great post!

I love that they trotted back like naughty children!

Lovely rainbow. I rarely see them.

Naughty heifers with minds of their own! Regarding autumn leaves, I like to leave them unraked in the garden though my better half has other ideas. Don't you enjoy walking on Autumn leaves?

I love how the cows conspired to slip past the kitchen window unobserved!

Thank you for your comments. Today the heifers are in the field by the house and are watching us over the gate. They look a little bit shamefaced I think - but I expect they enjoyed their adventure. I have just noticed that one of the black ones has the pretties white socks on. One sheep from the field below has decided to push through the fence and join them - perhaps she is suffering from an identity crisis!