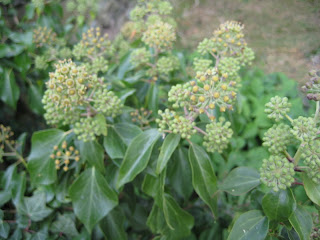 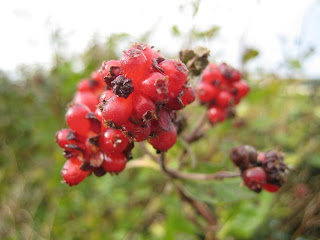 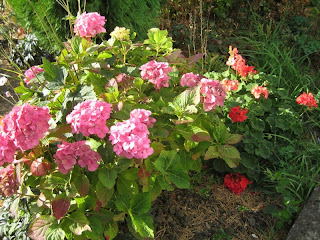 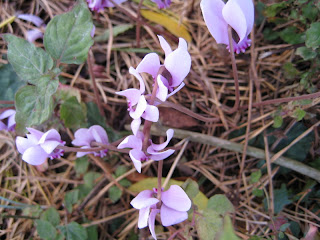 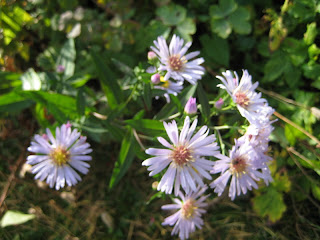 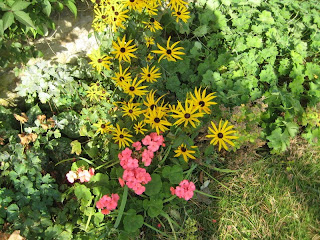 Yesterday's gale has died down. The wind has changed direction and there is now a sharp breeze from the North so it is much colder. We had intended a long walk with Tess this afternoon but shortly after we got into the first pasture, sharp pellets of rain began to fall - so it was a short walk after all. The farmer was pleased as it meant he could watch the Grand Prix from Japan.
There is some gale damage - along the lane various branches litter the verges, sycamore and ash mainly. And it is the same in our fields - nature's pruning, we call it. Heavy branches lie in the grass waiting for the farmer to saw them up for our new wood-burning stove. Holly and hawthorn - our favourite woods for burning - seem to have survived intact but there is some crab apple down and that smells lovely as it burns.
The vegetable garden has not been so lucky. The garden is totally enclosed - from the South by a high barn wall, from the East by a stone wall and on the other two sides dense hedges in all but one short space. We always have wind problems - we think due to the barn wall, where the wind can swirl down from the roof. It seems to form a vortex in the garden. One gale took all the glass out of the greenhouse. This time it has snapped off my buddleia (the one with orange pom-pom flowers) at ground level and thrown it to the other side of the garden. We shall leave the stump in the ground and see whether it throws up shoots next year.
The front garden is walled and suffers less, particularly as the house shelters the North side. There is still a lot of colour left unscathed. Rudbeckia and pelargoniums are still flowering, tiny pale cyclamen coum is pushing up through the pine needles and hydrangea and pelargoniums sit happily side by side in full bloom. In the bottom bed, where we fought long and hard to eradicate the michaelmas daisies, which are so invasive, one spike has survived and flowered - you can't help admiring its tenacity.
Out in the fields the honeysuckle berries are almost over-ripe. They advertise their presence by shining bright scarlet in the sunshine - they are the favourite food of bullfinches but they will have to hurry - the berries will be over the top within a day or two. The ivy is in bloom and as the blooms die so the berries begin to form.
The birds have noted the change in the weather. Our sunflower seed container, filled at 9am this morning, is totally empty by 2pm.
On the home front I make a note to wash scarves, woolly hats and gloves tomorrow so that they are all ready when they are needed.
Posted by The Weaver of Grass at 06:32

I have been doing just that Weaver. Putting away the light, gauzy, cotton clothing and getting out the sweaters, hats, gloves, etc. 'Tis the time - nature usually gives us ample warning - and in such a beautiful way.

Or is it cosy? Tea Cosy.Tea cozy.
It's definitely rosy not rozy and all is just peachey in the weaver world.I loves it!
Or is it peachy? Yip definitely peachy, just peachy!

I love your little spot in the world.

We are having wind and driving rain today along with dropping temperatures. What is coming doesn't bear thinking about - at least not until I have some of my firewood under cover. Sufficient today though, to sit quilting where it's warm and dry.

My woollies will all be dealt with tomorrow Bonnie - that will be a sure sign for there to be an Indian summer here.

I think s and z are pretty much interchangeable TFE - zeemz like it to me anyway! hope there is a good respone to your Monday poem tomorrow.

willow - I always think you part of the world sounds good too - maybe it is a case of the other side of the fence being greener grass because I don't suppose either of us would swap. But it is lovely to read about, isn't it.

Hi Janet - thanks for visiting, shall pop over and visit you now.

Dear Weaver of Grass, great flowers, some of them familiar but so hard to find the corrisponding name in Italian.
Here in Veneto it's still hazy and warm. Then what usually happens is a Bora wind and the temperature dropping severely all of a sudden with everything changing, the smell in the air, the heating in the houses, the leaves falling with an urgent determination....

I am happy you enjoyed "To The Last Crumb".
Yes, blogging is good for poetry and considering the fact of reaching readers it's much easier than submitting to magazines which reject work ninety per cent of the times!

Those gales were quite vicious for so early in the season. We got off lightly with just a very blustery day. Lots of colour still in your garden Weaver - ours is perking up a little. I always have a gap between summer and autumn which I can never quite fill. Either plants flower too early or too late for my plan! I do hope your pompom buddleia wont mind it's hard pruning a bit early. See you tomorrow at Poets' Corner!

weaver this is such a lovely post - they always are! but what made me laugh out loud was the unexpected change of direction for the farmer when the weather turned bad. "The farmer was pleased as it meant he could watch the Grand Prix from Japan." ya what?!!!!
have a lovely evening in the dale. steven

I read about your gales Weaver and saw the weather forecast. I'm sorry about the buddleia, I hope it recovers, they are fairly robust. I, too, laughed at the farmer glad for the rain so he could watch the Grand Prix!! lol. It's cold in the evenings here now, definitely autumnal.

love your photos and the hydrangeas especially. We're about to put away the winter blankets at our end :-)

I felt quite smug when I read your post last night as we have been having mild, mellow days here. I have woken up to lashing rain and grey skies so am now truly contrite!

I am sorry about your garden! But gales will b e gales! We had some strong wind, even though the weather forecast predicted gale. Now it's a grey, dull day.

Just happened upon your monday poetry post; not sure of the rules but here goes (on the spur of the moment):

"I was too far out all my life"
I believe she said (Stevie Smith)
There is no need to wave,
or to drown,
or whatever else was
troubling her spirit
(Too long ago when
I studied her verse to
really remember).
Never too old to LEAP forward
to look into
our own
future, unknown,
and say
'I am here, right now,'
Touching this earth
Blazing with colour
Seeing the day-to-day sky
Hearing the little sounds.
Listening.
I'm not waving or drowning
But living, and loving.
Being me."

That's all I can manage in a 'leave a comment' box. Sorry.

Damn! It's lost all its formatting!

You still have lots of fall flowers! - love the photos Weaver.

Great pics. I love the cyclamen. Pity about your buddleia but the purple version always seems to thrive, no matter what.

Your little purple perennial asters are the same as those growing just out my front door! It never ceases to amaze me how many of the same flowers bloom in both our worlds!