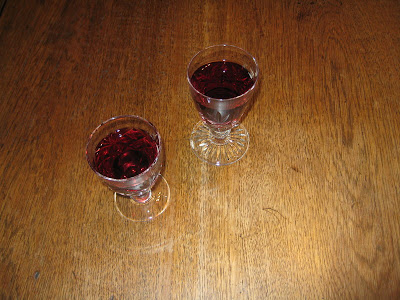 Here as promised are two great Winter warmers. I published both last year but some folk are asking again so I make no excuses for repeating them both. Blackberries are almost ready here - and very prolific this year so far - sloes are still hard and green and will not be ready until late October, and after a frost or two.

Blackberry whisky. (In the photograph)

This is so easy and the result is the most beautiful jewelled red.

1lb blackberries; 1lb granulated sugar; 1 bottle cheap whisky.
Wash and pick over the blackberries and leave to dry. In a demijohn mix the blackberries with the sugar and pour over the whisky. Leave for about two months and now and again pick the demijohn up and shake it well so that the sugar is completely dissolved. Finally decant into bottles (how much depends upon the size of the original bottle - should make almost two bottles) through a fine strainer. Marvellous if you have a cough; also good by the stove on a cold Winter night! Enjoy.

Neither the farmer nor I like the taste of gin, so we follow the advice of Hugh Fearnley-Whittingstall and use cheap vodka (which is almost tasteless) instead.
It used to be a real chore to make as you had to prick each sloe with a darning needle to release the juices, but there is a quicker way - wash the sloes, dry them wall, put them in the freezer and open-freeze overnight. Make the mixture the next morning - quantities as for blackberry whisky - 1lb. sloes; 1lb. granulated sugar; 1 bottle cheap vodka. Method the same too - keep shaking over the days to make sure that the sugar has dissolved and leave for a couple of months before decanting through a strainer.
The result is much drier than the whisky - if you like a sweeter drink then add more sugar when you make it. The result is also a lovely colour but we have none of last year's supply left - so I can't show you a photograph!

I understand that you can use raspberries instead of blackberries for the whisky recipe - obviously the flavour would be different but it might be worth a try.
Posted by The Weaver of Grass at 00:41

Oh blackberry whiskey must try that thanks for sharing

Thanks. I noticed in the UK that there will be loads of blackberries. They are not so prolific here but I will try. My cold beater is a glass of whisky with hot water, lemon and sugar. I am not sure of the medical benefits but it makes me feel better...Tramp

Oh thanks for the great recipe! Our blackberries are just triving at the moment and I can only have so many pies! I'm off to try this one! G.

I think that I meant thriving!!

Thank you for sharing this!

We have a seemingly endless supply of blackberries here, so I'll forward the recipe for blackberry whiskey to The Great Dane. Everyone in the UK seems to have made elderberry cordial too, but we don't have elderberry bushes - my project for the winter is to find some and start a little patch.

So close and yet so far, Weaver!!

I cannot abide the taste of Whiskey, but Raspberry Ratafia is gorgeous and I make it every year - bottle of vodka, 12 oz raspberries, 12 oz sugar. Put together in a lidded jar and give a shake every time you walk past (I put it by the kettle) for 2 or 3 weeks. Then strain the fruit from it (and have boozey berries with ice-cream!) and store until Christmas - if you can!

Oh yes! Time to start making some - for Christmas! I love the fruit spirits and find the frozen mixed fruit selections are excellent as the fruit soon breaks down!

Thankyou Pat - I might make some of the blackberry whisky for my husband.

I feel like a sloth, not a sloe. Luckily my mother-in-law and cousin make plentiful supplies and pass them on!
Both drinks look beautiful, and I'm very fond of rhubarb vodka as well.

Blackberry whiskey, - it has a wild romantic sound to is, and looks delicious. Charles is the whiskey person around here, - I will try it for him and make some of Belle's
Raspberry Ratafia for me.

Thanks for sharing Pat.

Was completely stuck for a birthday present idea for my boss next week. He's now going to get a big kilner jar (couldn't get a demijohn) of Blackberry Whisky which shoud be perfect for drinking at Christmas. Men are so hard to buy for - this just might also solve my Christmas buying dilemma for ALL the men on my list if I get my act together! Thanks Pauline!

Doh - I meant Pat, not Pauline! And no, I didn't have a crafty slurp of the whisky!

Thanks for the comments. David is as I write picking raspberries - I have the sugar and the vodka - so thanks Bovey Belle - shall add your recipe to my winter 'wine' making. Have also found one for Blackcurrant vodka, so am trying that too with quantities as for the Raspberry Ratafia.