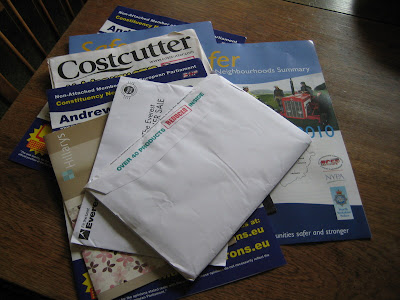 The photograph above shows this morning's mail. It consists of two advertising pamphlets for our M E P; two advertising pamphlets from our local grocery shop; two 'letters' from a double-glazing firm; two letters from a Health Food outlet; three brochures for clothing. That was the sum total of the mail and it weighed thirteen ounces. And it all went, unopened and unread, into the waste paper bin from where it will untimately go into the re-cycling bag - presumably to be recycled into pamphlets, brochures,........need I go on? Nobody I know reads any of this stuff; nobody I know has ever ordered as a result of receiving any of this stuff; everyone I know puts it straight into the bin. I ask you - is it necessary? Is there any way of stopping it?
At lunch time today we had three 'cold' calls - two were completely silent when I lifted the phone - the third was a recorded message of which I heard the first three words - 'Congratulations you have........' at which point I put the phone down. We subscribe to the Telephone Preference Service but it makes little difference. So I ask you again - are these calls necessary? (some will claim that they keep the callers in work); is there any realistic way of stopping them - particularly as they always call at mealtimes?
And a third, much happier and more amusing comment on Communications - this will I am sure make you give a small, gentle, quirky smile.

Beijing is encouraging its inhabitants to learn English phrases in an effort to make Beijing an 'international city'. Last time this happened was at the time of the Beijing Olympics when taxi drivers regularly learned the Chinese words - san ke yu fei li ma chu. These words were meaningless in Chinese but when said quickly (try it) slightly resembled 'thank you very much.'

In The Times there is a list of English translations from the Chinese which have been seen around China and the one I want to share with you is the 'Keep off the grass' sign translated into English on Hainan Island. It reads: 'Do not disturb - tiny grass is dreaming.' Don't you think that is lovely. It sure got rid of my irritations about the first two episodes.
Posted by The Weaver of Grass at 06:29

No photo!
Failure of communication?
How one used to long for the postman/person!
Now I get much better stuff by e-mail!

What I've done in the past is take the special offer coupons etc. out of them and put these into the other firms reply paid envelopes and then post them. It never really solved anything but even so I enjoyed doing it.
Yesterday, 12th July, I got two postcards: one from Cardiff (Wales) that was posted on 30th June and one from Puerto de la Cruz (Tenerife) that was posted on 7th July.

We have a big bin conveniently located outside the post office into which my junk mail descends. Being out in the country we have no deliveries.
We get a large number of donation soliciting phone calls. Giving to charity is laudable and we support a few BUT, worthy as the Kidney Foundation may be, my purse strings are not loosened when called from sleep after just coming home from a heart operation.
The joys of modern communication are a boon for blogging but are generally a great waste of time.

I loved the Chinese 'keep off the grass sign'!...as for mail - mine resembles yours and is mostly headed for the paper recycling bin.

I sort my mail exactly the same way, Weaver. I have little enough time to read the "real" mail, much less for the junk. And it bothers me that we are cutting trees, using oil, etc to create and deliver this trash. Email is the same but at least there are no trees involved when I put those into the trash.

I have been told to take it easy, sit back and watch the grass grow - but it never occurred to me that the grass might be dreaming! Adds new insight into Yeats and his embroidered cloths of heaven under our feet!

'Do not disturb - tiny grass is dreaming'! That is so lovely, I want to wrap it up in delicate, Chinese paper and put it into my quotations box immediately!

Great post, Pat - and one I'm sure we can all identify with. Communication these days seems all about sales and advertising. When was the last time someone accosted you in the street with a 'Hi, isn't life beautiful?' rather than with a 'Can I just take a minute of your time, don't worry I'm not selling anything ...' or a 'Did you know Jesus Christ can save your life?' Junk mail is just - junk. And, as you say, it recycles itself on ... and ... on ...

Omigod, word verification is 'godystif' ... not joking ... is God bristling with rage at my remark about his evangelical touts?!

It's exactly the same at this end of the world and the cold calls always end in rudeness on the part of the caller. When I say No thank you, I'm not interested, a petulant "Why?" follows and it's very difficult to extricate myself from the call.

I love the 'tiny grass is dreaming' translation. One of my daughters is a hairdresser and a lovely Chinese lady was always late for her appointments and would rush in saying 'Soy I lay'! by which she meant 'I'm sorry I am late'. This phrase has now crept in to use among the family. How I agree with you about all the junk mail and junk phone calls we get nowadays. I feel sympathy with the postmen and women who have to cart it all around, knowing that it will end up in the recycling bin. Our phone number is ex-directory which helps keep the unwanted calls down. Our biggest hate is for charities who send 'free gifts' with their appeal letters. This infuriates us both as the money donated for those in need is being wasted on gifts no-one wants which we return.

The TPS whislt it can remove your details from the bona fida companys and respinsoble organistations it cannot stop list brokers from sellin peoples details to telemarkerters and less than scrupulous business operators. If the ring me and try the research angle I just tell them that I work as researcher (which I used to) or if you don't feel comfortable you just say a close friend of relative workes in market research. Cold calls I always ensure I am extra polite for some reason this phases them So once theyt have said their inital intro I thank them and say poitey thanks for considering me but would they please remove my detals from their database. Thank you for calling and you put the phone down. I seldom get cold calls via the phone now.
Some Chinese translations are pure poetry for example memory - do not forget to remember

"It keeps people in work" is such a pitiful argument, isn't it? What sort of work?
How satisfying can this work be, on any level?
"Arbeit macht frei"
...Tramp

I travel to Japan a lot (Family) and I must admit sometimes the way they translate is so much more charming than the original and sometimes it is hysterically funny.
After reading your post I must/want to illustrate
Do not disturb, tiny grass is sleeping.
Lovely !

"Lovelier in translation" should be the title of this post. Charming!

Love it, what a wonderful visual it conjured up.

I've solved the annoying solicitation phone calls with an answering machine - it screens all my calls and when it's someone with whom I want to speak, I can pick up the receiver. Junk mail, well, it seems endless.

but we'll always have blogs!

First I should say I get as annoyed by all this junk as everybody else. I particularly like Poet in Residence's solution.

As with spam email, all the junk that comes through the letter box comes because it works. Firms send it because people do respond to it.
Same goes for the irritating phone calls. So, in a way, it's not the fault of firms sending it, it's our -the public's- fault for responding to it.

And it's my guess is that if the Post Office stopped delivering junk the cost of stamps would go up, or worse.

The trouble is that the economy -and all our jobs and pensions- relies on people selling stuff. If we could see how hard our money works when it's not in our pockets I should think we'd be amazed, and probably dusturbed.(I'm imagining the economy as a museum exhibit: a machine in a glass case).

If we really want to end to these irritations -and deal with the serious stuff like global warming and poverty- we need to move to an economic system that doesn't rely on growth.

Well, having read all these comments - some solutions as to what to do with junk mail, some justifications for its arrival in the first place - at least I know that we are all in this together - I do not stand alone - and that's a grain of comfort. Thank you for taking the trouble to reply in such depth.

Oh, you too? Irritating cold calls are an ever present thing here. Fortunately, we have "caller ID" on our phone which tells us who is calling. Whenever one of "those" calls comes in, the little ID fellow says... "Unknown". We then know not to pick up the phone. You won't believe how much stress is eliminated by that one little device.

I, too, love the Chinese translation of Keep Off The Grass! Maybe I should get one of those for my front door. "Please Go Away. Pamela Is Dreaming"!

I'm still smiling at the keep of the grass sign, how lovely. I have a rather similar story of how a phrase has entered our family. A friend in London went to a Chinese and was ordering the food for a takeaway by the numbers. Then he said 'one portion of fish and chips'. The young lady looked a bit non plussed and said 'ow you spell fi an chi?'. Wonderful.