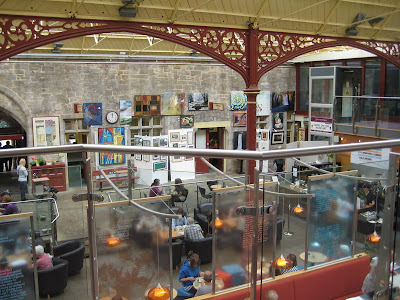 Today my grandchildren have been to see me and together with my son and his wife we have all be for a little outing. Richmond in North Yorkshire is an ancient town with a ruined castle and a castle wall walk and a picturesque river walk. But it also has one very modern asset.
The Old Station has been there since the end of the nineteenth century but has not been used as a station for many years. It has been a hardware shop, but around six or seven years ago it was converted into an absolutely lovely complex, keeping all its original features. It now houses a micro brewery, an ice cream parlour, a bakery, a cheese shop, a super cafe and a well-planned exhibition area, as well as two well-equipped small cinemas.
So we all went to the Old Station for a coffee and cake and then a look at a new exhibition called 'Up on the Wall'. 128 artists have each paid for a spot on the wall and on that spot they can exhibit one work of art (there is photography, embroidery, watercolour, gouache, oil painting, drawing,) and if that work sells they can replace it with another - or if they wish to remove the existing work they can put another in its place - in other words they have paid for one bit of wall space. Quite an original idea and one which seems to work well.
I took a couple of photographs to show you what the Station is like. One is taken from the 'platform' looking down into the cafe area (which is where the train lines would have been) and the other is taken from the mezzanine floor looking down into the cafe - so it just gives you some idea.
If ever you visit Richmond (the Richmond of 'Sweet Lass of Richmond Hill' fame) - for it is right on the Northern tourist trail - then do take time to pop into The Old Station (although you nearly need a mortgage to buy coffee and cake!)

###STOP PRESS Tomorrow I will post my annualpost of recipes for both sloe vodka and blackberry whisky as people keep asking for them. See you then.
Posted by The Weaver of Grass at 09:40

What a lovely spot for a gallery! I'm looking forward to your recipes. Mmm.

You had good company for your day out Pat. The old station is great use of what might otherwise have become an eyesore. It sounds as if it is now a fabulous public space with something for everyone. At least the high prices will keep you all from too much indulgence!

What a great time you must have had! A wonderful idea to convert a station hall into a shopping mall.
A pity that we cannot meet, but I understand! Have a great time and, what's very important, beautiful weather!

That looks like a lovely place to visit and what a novel idea for the artists to hire a piece of wall space. I think that would be very interesting and would make visitors keep returning to see what has changed. Cheers,
Robin

Such a good re-use of old industrial space. Good luck with your diet mentioned below.
I should join you.....!

What a wonderful venue: we love Richmond, but never encountered the Old Station [though we enjoyed the secondhand bookshop - and the castle etc].

I'm wondering if you will seek a patch of wall for your art work? It sounds a truly wonderful scheme as so often people [like me] who enjoy art and craft don't know how to find an opportunity to start exhibiting - and may not yet have enough top pieces for a whole show.

Sounds good Pat - we could tie in a visit here sometime. Is it open every day?

Ooh, that looks fabulous Weaver. My idea of a good day out - coffee, cake and art!

Thanks for the piece on your outing in Richmond. Although I did not get to the Old Station when I passed through Richmond recently on my coast to coast walk, I found the town to be quite lovely and would like to return at some point to explore the area more extensively.

A lovely day's outing Pat, and great to have your grandchildren with you.

Love the 'rent a wall space' concept. It all looks like fun, and very creative - touristy I guess, - hence the alarming prices....

Will be back tomorrow to pick up those inviting recipes.

It's good to see old buildings re-purposed instead of torn down.
Lovely to have your grandchildren to visit. We go to see ours in less than a month!

What a lovely idea, the whole thing seems to work well, even if you do have to pay a fortune for a coffee and cake!

Thanks for the comments - yes it was a lovely day and a real treat.

It's wonderful to see old buildings rescued and restored and put to good use. I'm looking forward to making some of your berry whiskey and am off to google to find out what a demijohn is!