The good and the bad on the Lane.

There is A mistle thrush perfecting his song on the topmost branch of an ash tree down the Lane.   He hasn't got it quite right yet (he is not singing each song twice over) but he is having a good go at it and I am sure the beauty of his song will soon attract the ladies.

In the fields adjacent to the Lane the curlews are back.   Later on they will make their nests in the grass in our fields and rear their young.   In the meantime they are here in their flocks, whirling around and make their haunting cries until well after the sun has set.   What with them and the hooting of the owls in our Scots pines by the farmhouse it is not exactly noise free. 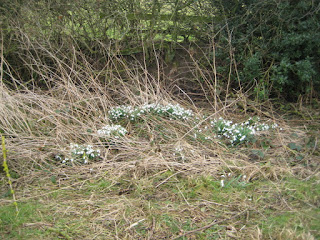 I have just been for a walk on a cold, sunny day.   The Lane has been despoiled by half a dozen enormous yellow painted arrows on the road and numerous yellow circles sprayed on the grass.   Yes, the Gas Board have been down and marked up various Gas leaks for repair - and not before time; some of the leaks have been there for a couple of years.   I just wish they wouldn't use such lurid paint, which takes a long time to disappear.  Friends S and T should be delighted with this news - if they are reading this.

In addition the rubbish-merchants have been at work too.   On my walk I counted six abandoned beer cans and two (presumably) empty Take Away boxes.  Why do people throw their rubbish out of the car window?   We tend to assume it is young folk, but I think that is an assumption we shouldn't make without proof.   When I lived in a pretty Cathedral city many years ago, I lived in a quiet cul-de-sac where a couple came to live not long after we arrived.  It was a friendly cul-de-sac but this couple made it clear that they didn't wish to socialise and felt themselves to be a cut above the rest of us.

That was until one day we read in the local press that the lady of the house had been fined for throwing litter into the hedge bottom.
She had thrown a pile of old magazines away and one of them had her name and address on it, so was traceable.   Did we feel a little smug?  You bet we did.

On the subject of litter - there is one such pile of litter down the Lane which is very welcome and which grows bigger and bigger as the years roll by.   Some years ago somebody dumped a heap of garden rubbish in the hedge bottom (again, why on earth do they go to such trouble) - the rubbish pile has long since been absorbed into the surrounding undergrowth but the snowdrop bulbs it contained have multiplied, so that now there is a splendid show every year.
Posted by The Weaver of Grass at 08:28

I don't understand people who throw or dump garbage either.
I saw a beautiful photo of an Italian village with a old church on a curvy road. The trees and mountains were wonderful. Then I was shown the second photo which showed what you really saw when you came around the curve in the road, this beautiful village was sitting on the hill that everyone dumped their garbage, old appliances and part of a car on ! Tons of garbage flowing down the hill to the valley.

I often wonder at people who feel that their convenience has no repucussions on others. A poverty of brain & hear - like our American republicans. /Rob Port man's son/


Aloha dear friend d. We love spending time with you

It's something that annoys me too - whilst walking our local lanes, I regularly come across takeaway rubbish dumped on the verge, and LOTS of empty bottles too, but we know who is to blame for those - it's our local alcoholic.

I am sure these people wouldn't be at all happy if us countryfolk came and dumped our rubbish outside their house . . .

It's always sad to see litter, there's far too much of it around.

I love the mistle thrush and his song, finding more of them in Edinburgh this year than ever before

I find the paper coffee cups from the famous Coffee franchise we have here in Canada known as Tim Horton's all over our Country valley village. I take a bag with me and pick them up as Miggs and I go for our walks , last thing I want is the wooded area, river and country side of our valley and village all full of litter I do what I can ! It ticks me off that they just don't care ! Oh the flowers at the end of your property that's a good thing ! I just wish people would think more about nature and not litter ! Have a good day !

There is still a large chunk of car bumper and other bits in the hedge beside a road near us where a car left the road and crashed through the hedge. When they took the car away why didn't they load up all the bits as well? Some of them are quite large and so unsightly.
Those snowdrops are a lovely sight - we'll forgive that particular litterbug but there is no excuse for the rest of them.

With those lovely snowdrops, one can only say "God works in mysterious ways". In our State, which is 4 times greater than Britain, years ago, one man organised a yearly clean-up campaign along roadsides. It has become so successful that other States are beginning to follow it. Just one day in March when ordinary people go out and collect the trash along road verges. You hardly need the sign at the border, it is obvious you are in South Australia by the cleanliness of the highways. The 10 cent bottle and can refund also has helped greatly as those less fortunate pick up any discarded refundables.

I once saw a friend toss a pop can out the car window just before she arrived at her house. Later I asked her about it - and she said - oh someone will pick it up and I don't want trash in my house. I checked for quite a while and on one had picked it up - but she was right - I finally picked it up after two months. Makes you wonder. At least your snowdrops are a lovely bonus.

In younger, fitter days I used to walk in the Alps. You would think that people who clamber to the tops of mountains would be sufficiently in touch with the environment not to despoil it, but no - on most every popular peak was a pile of litter, drink cans mostly. Now if someone's fit enough to carry beer up to the top then surely they could carry an empty can down.

Winter storms throw garbage on beaches like the Lido in Venice Italy. In spring workmen in the trucks arrive to remove it. Can you imagine the outcry of the millions under the beach umbrellas in summer if nobody removed all the stuff thrown onto the beach by the waves in winter? In fact, the beach would stink like rubbish tip and there would be flies and seagulls everywhere. It's what we deserve.

It seems that we are all bedevilled by that dreaded litter. The answer seems to be that we have to pick it up ourselves doesn't it. Thanks for calling.