Well, dear readers, I went with friends to see Goldilocks and the Three Bears in our local little town last night.  It was a terrible night with snow underfoot and snow falling and yet every seat in the Methodist Hall was taken - no-one had chickened out because of the bad weather.

It brought back such memories of my own childhood.   There was not a vestige of sophistication about it; all ages performed from very young to middle-aged and I am sure that a lot of the audience knew most of the players.   The whole thing is very amateur and is done for charity.

The audience responded by singing when asked, by responding when asked and by lots of "it's behind you" and "oh yes you did" kind of thing.  It was a jolly evening.

One thing struck me and really left me thinking.   We were on the third row from the front.  The two front rows were largely taken up by teenagers (I suspect still at secondary school),  We started the proceedings by singing the National Anthem and although they stood they seemed hugely embarrassed by the whole thing and either they didn't know the words or they chose not to sing them.
Correct me if I am wrong but don't children in America sing their National Anthem each morning in school?   And if so, is this a good thing or a bad thing?   Food for thought there.

Snow is falling as I write.   There is a couple of inches of snow on the ground and the temperature is below freezing.   The farmer has gone out with his shooting syndicate in spite of the weather.   I have put a good slug of Highland Park single malt into his coffee flask and he has wrapped up well, but still rather him than me.

The furthest I shall venture from our log burner is into my kitchen
(photo below) to make cream of onion soup with croutons and grated cheese for when he returns. 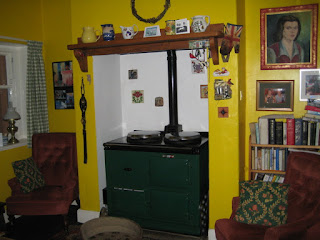 Meanwhile the number of birds at our feeders grows daily - however much we put out it has all gone by lunchtime.   Yesterday friends G and J saw Redpolls and Siskins in our little wood - now I am hoping they make an appearance at the feeders soon.   Keep warm.
Posted by The Weaver of Grass at 04:16

American students don't sing the National Anthem every morning at school, but in many schools they say the Pledge of Allegiance.

I just love your kitchen, what a gorgeous sunny yellow! It must be so welcoming even on the gloomiest of days! how i could so easilycurl in one of those chairs! Lovely!¬

Oh that sounds like a fun evening ! Here they still sing our National anthem but used to say the lords prayer I did in school now that is all gone no more a shame it is ! I just love watching all the birds at my feeders I have 12 feeders in all . Your Kitchen is lovely ! Have a good day and stay cozy !

Your evening sounds delightful and dare I say that the pantomime was probably more enjoyable than one with a 'star' filled cast.
I am old enough to remember the family standing up even when the National Anthem was broadcast on the radio!
Your kitchen looks so inviting - I wouldn't leave it either.

I taught in California, the anthem was played on the intercom in the morning and then the whole school together said the pledge of allegiance, but our school was very much the exception. In another generation all of this will be gone, patriotism is seen as a bad thing in this country now.

I say Pat that soup recipe sounds wonderful - will give it a try next week. Steak here tonight with a couple of bottles of wine. Snow continues to flow but everybody in for the night now.

No national anthem at school but always at the baseball game.
I made the students stand up for the Pledge of Allegiance but did not require that they recite it since I myself ....."one nation, under God, with liberty and justice for all"......Hm.....
I have very mixed feelings about patriotism, but have a great affection for England--the tribe amongst whom I grew up!
Good to hear that the THree Bears was a hit!
Good to see the AGA!

Your Panto sounds such fun. Our village panto is always highlight of the winter and enjoyed across the age ranges.

Your kitchen looks so warm and inviting.

I hope the redpolls and siskins find your bird feeders.

No national Anthem in schools anymore - some have the pledge of allegiance to the flag and some don't - depending on the school and the school district I think. And never prayers in schools- well, at least there aren't supposed to be, since the prayers were always Christian and that is not allowing anyone their preference in religion. Some schools still force the children to pray each morning, but I imagine if a fuss was made about it, something would change. This usually happens in the states with very low education scores - we can all draw our own conclusions to that.

Times do change - and the "one nation, under God" in our pledge was only added in the 1950s when our country was so anti-communism and we vowed we would always follow the one "true" god - well that has changed now too - thank goodness, and we allow for more tolerance - which, in my opinion is most important of all. Since the pledge contains the mention of God, it is often not said at the beginning of school- another instance of tolerance.

I enjoyed your post very much and like the thought of local theater and participation. Stay warm

No National Anthem every morning here - I'd guess that children mainly hear it at sporting events - sung badly, in an odd key and with a decidedly country and western twang to it.
We are supposed to get some sun today and I live in hope! One grey day after another has me wishing for even a bit of snow to brighten things up.
The corner with your stove looks very cosy.

I think every school district and then every state has a different stance on the National Anthem here. I'm pretty sure it's not sung every morning at school, but definitely at all school sporting events. The pledge of allegiance is said every morning at my granddaughter's school as well as the pledge to the Texas state flag. (It's a Texas thing!)

You have described a life admirably well lived, my friend!

American students recite the Pledge of Allegiance; and would (I believe) be sophisticated and cooly uncomfortable under similar conditions.

I can remember 'them' playing God Save the Queen in North Wales (a UK province not even on the union flag) in a cinema which was called appropriately The Empire , it'd be in the 1950's, and us small boys had to stand up in the dark.

Sounds like a delightful evening Pat, my Sister lives in London and the snow is falling there too, she said it is freezing day and night, I can't remember what that feels like! We are sweltering here in Aus, I would love to come and feel the cold for a few minutes ONLY lol. Your photos is lovely, I would love one of those stoves, not really necessary her but they look beautiful, take care and keep warm and safe. Shirley :)

I've just found out who said "Patriotism is the last refuge of the scoundrel." Samuel Johnson. It had to be an 18th century bod. Boswell reckoned he meant false patriotism. I take it to mean that politicians often invoke patriotism while concealing an unpalatable or self-interested agenda.

Off the cuff, I'd say people in the UK are reserved about their patriotic feelings but that they come out when they are invoked. This is perhaps for the best, as if you make too big a thing about it then it makes it easier for scoundrels to exploit people's feelings and mislead them.

Given current discussion of Britain's EU membership, this is pertinent food for thought.

I meant to add, I think it follows from what I've just said that one doesn't have to be a republican to not want to sing the National Anthem every day.

Thank you for all the information about National Anthem/Oath of Allegiance. Makes me think that maybe one has to be a certain age before one finds it easy to sing the National Anthem whever one lives.

Thank you for this winter tale. Your photo looks so warm and cosy.
About the national anthem in my country I can say that young people over here don't know ours either. It's probably too old, written in 1600 and something, when the Prince of Orange was fighting the Spaniards. One sentence says:"The king of Spain I have always honoured"....Now that is very old fashioned.