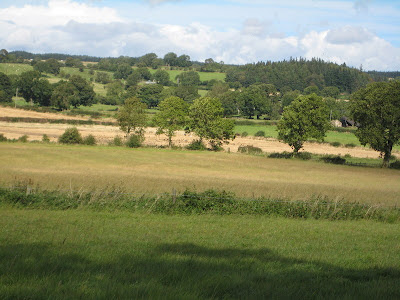 The Autumn Equinox occurs this week-end - then we are well and truly into Autumn and almost all hope of an Indian Summner is a pipe dream. Interesting then that my son should choose this coming weekend to go camping in the Lake District with his daughter and her partner and also his son. My worst nightmare.

I think this nation can be divided into two quite nicely - those who adore camping and those who abhor camping. I think you could do marvellous sets and venn diagrams using this as a starting point (assuming that your maths was good enough, which mine definitely isn't).

When my friend G and I went up to Tan Hill the other day (see an earlier blog), there were several of those little low tents, just high enough to crawl into and zip up. When I mentioned these to my son, he said they were 'marvellous', you could just strap your head-light on, crawl in, get into your bivvi-bag and read the night away. At the time he was re-reading James Joyce's Ulysees and it did strike me "what have I spawned that could be so entirely different from me!"

Laughing about this with friend, G, this morning, she told me a lovely camping story, which I must share with you.

A friend of hers some years ago had a seven year old son, who really wanted to go camping. He kept pestering his mother to take him but she really didn't like the idea of going away for the night to a camp site a long distance away, in case he didn't really like it. She hit on an idea.

Together they listed all the camping equiment they needed, gathered it all together and packed the boot of the car. Then they set off. They lived in quite a big village and she drove all round the outskirts of the village, down a few lanes and back again, until she arrived in the large orchard of her neighbours next door. Driving down to the bottom of the orchard, they unpacked, pitched the tent, cooked their meal and had a lovely night camping. Next day they drove home by the same route and he arrived home having enjoyed a lovely camping holiday, blissfully unaware that he had only been next door.

It is interesting,before I sign off today, how farming has caught up in spite of the bad weather. Round here the harvest is all in. We are mostly grass land but some farmers with dairy herds grow a few fields of grain for feed and they have all been harvested and the straw led away.

This coincides with the time of the year when the rooks begin to flock again - any day now they will start passing my bedroom window as I drink my morning tea. In the meantime they are totally destroying the peace of the countryside round here by clacking and cawing in the trees - the noise is deafening and if they are not in the trees then they are in the harvested cornfields picking up any dropped grain and searching for worms and leather-jacket grubs. The cornfield in the middle distance of this photograph (just down the road from our farm) is absolutely covered in rooks looking for a tasty meal.

I love rooks, but I guess all that noise is irritating if they're too close by!

I love the camping story!

What a beautiful view you get to see everyday.
Love, love, love the camping story.

I noticed loads of pheasant this morning. No idea where they all came from. Stupid things will run straight into the car though. They have absolutely no road sense.

Sign me up as a nature lover but NOT a camper.
Little tent and Ulessys(sp) : my idea of hell.....

What a lovely story! We always went camping with the children and we all loved it. The only moment we didn't was when it rained. Then we drove around and saw the sights in the surroundings.
Thanks for your help in looking for rabbit stories. My pupil has a rabbit herself and told me how naughty he was.She loves it.

I love that camping story. I'm not a camper either and a few caravan holidays in less than summery weather, trying to air nappies and dry wet anoraks was as near as I wanted to get.
I'm amazed our garden looks so good after such a dissapointing summer. Most plants have obviously enjoyed it.

Interesting to read about the rooks. We are new to living in the countryside, and I heard them this morning for the first time. Very noisy indeed!

We have never been campers always preferring a little luxury when away from home. A couple of years ago however we did spend part of a night in a tent, a workshop we attended and the only accommodation was bring your own tent, we took our Son's. Well to cut a long story short, the air mattress went down, it got really windy and the tent flapped around, we spent the rest of the night trying to sleep in the car, it started raining around 3 am so we were out in the dark trying to dismantle this tent and get it away before it got wet. We both vowed never again lol :):)

I used to love camping but somehow the attraction of a comfortable bed seems to win out these days. Love the camping story.

Thank you for calling - do come again.