Out for the Day. 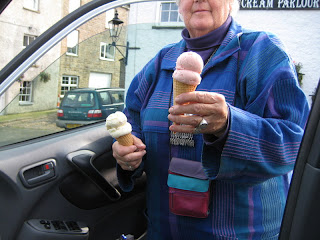 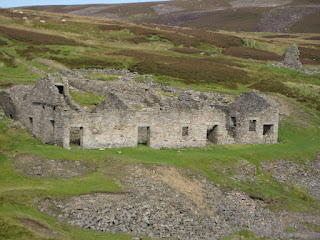 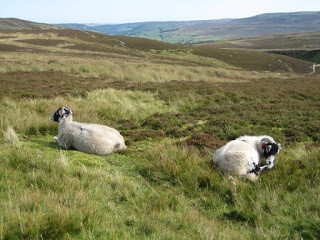 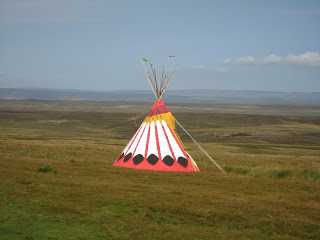 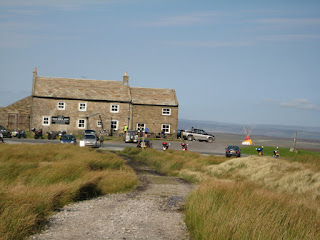 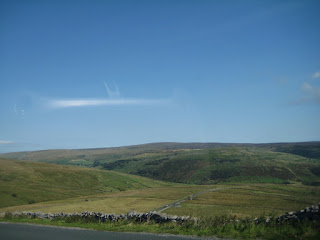 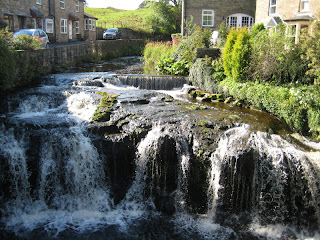 Regular readers of my blog will know that there is nothing I like better than a day out. Today, just as a huge load of straw arrived to be unloaded and stored for Winter, a friend, G, also arrived and said did I fancy going out for a jaunt. Did I??? No need to ask, of course.

We set off through Wensleydale for Hawes, and the first photograph today shows the nice waterfall in Hawes town centre. There is an exhibition of quilting on at the Hawes Countryside Museum, so we went round that and then we called in at the Herriot Gallery for an exhibition of the paintings and etchings of Piers Browne - these were, as usual, an inspiration. His work is absolutely lovely.

Then it was off over the Buttertubs Pass with its spectacular moorland scenery and down into Swaledale. The weather was perfect with lovely long views of the moorland countryside. Now and again we spotted a grouse in the heather, but other than that - no birds.

We decided to drive up to the Tan Hill pub for a spot of lunch. After the pub in Flash in Derbyshire, I understand that the Tan Hill is the highest pub in England. There were plenty of bikers there, as there always are in Summer. A lot of the bikers round here only licence their bikes from April to September, so I expect many of them were taking advantage of a really nice day to get in an outing.

Home-made tomato and basil soup with hot rolls and butter - then off up the track to give the dogs a walk. Someone had a tepee by the pub - very colourful but nobody around to explain whether they were actually camping in it or not.

We came back by a different route, over Surrender Bridge and past the old lead mine workings, now just a ruin but once, a couple of centuries ago, the absolute hub of the Dale. And to end our day out a delicious ice cream in Reeth, which was also heaving with visitors. Seems that everyone was taking advantage of that late Summer sun.

##The commonest sheep around these parts is the Swaledale sheep - notable for its horns and its white nose. Here are a couple of them taking advantage of the sunshine. They are very hardy and stay out in all weathers.

Well, you didn't need much persuading!

Yum! A good friend is always a double-scoop girl!

Interesting teepee. And have you noticed that most places spell it tipi now? I wonder when/why that change happened.

What a wonderful trip around the Dales! That ruined stone building looks interesting. The views over Buttertubs must have been spectacular on a sunny September afternoon.

Lovely photos of wonderful surroundings!
Thank you for your answer. The books about animals is for a pupil of mine . She ia a student of a grammar school. She has problems with learning English. For me it's no problem, for I am used to teach children with learning problems.

How lovely! And ice cream too!

Beautiful photos, what a lovely day out, I am much in need of an outing at the moment, one seems to get carried away with every day chores around the place.

so the sheep are hardier than the bikers then?

Nice shots, and a pleasant "day out" four us as well. always a pleasure. Thank You

Gorgeous photos of some of my favourite parts of Yorkshire - thank you for that. I hadn't realised you need to register bikes in Britain - we don't have to in Australia - lucky us. Cheers

A jaunt AND icecream! What could be better than that?!

What a lovely day out - I could almost smell the fresh moorland air and feel as if I came with you. I love the little waterfall in the town.
Thankyou for the lovely comment you left me. Re colour choice and stitching skills on quilts: I think you have to visit the very big exhibitions to find excellence in both areas. However, I think it is rather nice that beginners and the less skilled feel they can show their work in smaller venues.

Glad you all enjoyed the scenery - even if it was second-hand. Sadly you couldn't have a lick of the ice cream too.