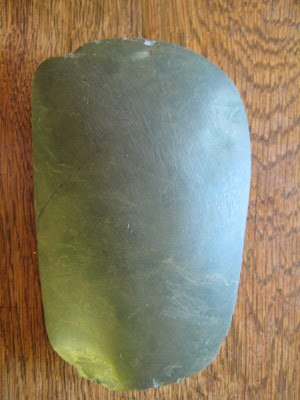 Regular readers of my blog may remember that some time ago I showed a photograph of this axe head which my father in law dug up in one of our fields in the 1980's. I can tell you that just to hold it, feel its smoothness and marvel at the workmanship is exciting in itself. I also like to think that probably my father in law's was the first hand to touch it since it was dropped all that time ago.

Over the past few weeks there has been a really good programme on television called The History of Ancient Britain and this week's episode centred around the Langdale Pikes in The Lake District and was about the Neolithic axe factory which had been found there. We had already been told by archaeologists that our axe was probably from that area so we watched the programme with interest.

Afterwards I sent an e mail to the archaeologist from York University, Mark Edmonds, who had appeared on the programme. I also sent him a photograph of the axe head. He replied almost immediately, which was very good of him. I thought you would be interested to hear about the additional information we now have.

Apparently he feels that the original axe head would have been considerably bigger than this one; he felt it had a long history of use and had been regularly resharpened and repaired. He said people were often keen to hang on to a good axe. This makes sense doesn't it, as we are still like that today.

He goes on to say, and I quote" Most blades in most areas show signs of use but there are also examples that would have been impractical for many tasks which suggests that such axes possessed importance as tokens of identity. Their exchange would be an important way of making and maintaining ties between people who lived in scattered groups. Some may well have been precious and there are hints that they had an almost mystical quality and were even thrown into rivers, probably as sacrifices to the gods."

It is good to hear this from an authority on the subject and it does go to show the absolutely marvellous efficacy of the computer that within twenty four hours of the programme I could get in touch with the expert, e mail him a photograph and get such a comprehensive reply. And how great to be in contact with such an enthusiast who, although he is working in Orkney at present, was willing to send me all this information.
Posted by The Weaver of Grass at 10:42

weaver what a find! it's so cool to know more about the axehead and then to open out the bigger picture of what life must have been like when this tool was made. steven

What a wonderful post today. I adore how excited he is about his work, to send you a reply so fast.
I have a Indian grinding tool that was found on some land that a house was being built. Although not as old as yours, I would think, I feel the same excitement as you.

A fascinating post Pat. How exciting to watch a programme made about your own locality and knowing you had that wonderful artefact. I wondered whether the smaller axes might have been made for ceremonial gifts.

We watched that programme too, and I still remembered a lecture on this site and was bouncing in my seat! Your axehead is beautiful and obviously very useful to its previous owners. Part of the significance of these stones initially was the difficulty in getting them - that made them special in themselves and they would have given their owner a certain status in local society.

I can remember seeing a polished jadeite axehead in Le Hogue Bie Museum on Jersey. Totally impractical to USE but its value as a status symbol or ritual piece was imeasureable.

This information from the expert seems symbolic of the axe head. An act/object of exchange. What a find.

That's fantastic. What a find -- and what a history. How wonderful for your family!

Five thousand years old. It boggles the mind that your father-in-law found an object that had survived that long. Hidden under the earth, it lay silent until he raised it up so that it could tell it's story to you.

I love to read about such connections to long, long ago. It must be amazing to hold it and imagine it in other hands.

Fascinating, - it must be wonderful to run your hand over this ancient object and imagine its history. What a long way we have come in 5000 years....in regards to science and technology anyway...

How amazing Weaver. We watched the programme and marvelled at the workmanship in the axe that was featured. An early example of the "Useful and beautiful".

Very cool. Wish I could have seen that program. I like archeology and the history it reveals.

what a beautiful axe. i love the colour. I've never come across one that was broken/cut down and then resharpened. I enjoyed that programme and was thinking of it as I started to read your post...

I watched the programme and picked up on his passion. How enormously gratifying to have had that exchange, Pat.

I studied archaeology at University and my specialism was British prehistory, so I know all about stone axe heads and their ceremonial exchange. I am SO jealous that you have one.

Certainly makes one feel insignificant when you really think about the history/people who came before us. Wonderful post, Weaver and thanks for sharing your great find. How exciting it must have been for your father-in-law.

It does look smooth so I suspect it may have been thrown into the river as an offering to the Gods. Now you have it.

Thanks for the comments - I wish I could just hand it round for you all to handle.

What a tremendous piece of history to be able to hold and learn about. Talk about a conversation starter when you've got people over! Just wonderful.

From an ancient axe to the miracle of the internet. Quite a stretch. Amazing find, Weaver. Glad you recognized what it was and didn't just toss it as another rock in the road.

You are part of the past ( Dad, and the artifact)
as well as the present & future (the web/blogging)

What a marvelous artifact. My mind thinks more in increments of 100 years that in thousands of years.

I just finished watching the most wonderful British television series - "Downton Abbey" - surely you've caught it already, but if not it is well worth a look.

You know I am nutty about old stones and bones. This is so fascinating! My mother still has a huge Native American ax head she found when plowing a corn field as a young girl.