The Big Day (for pheasants) 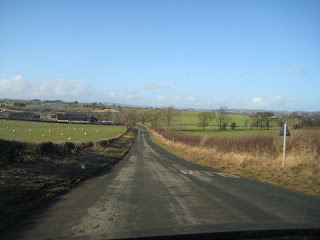 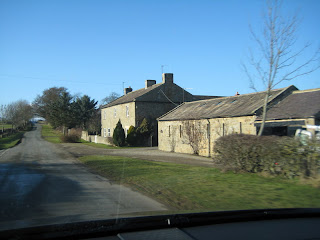 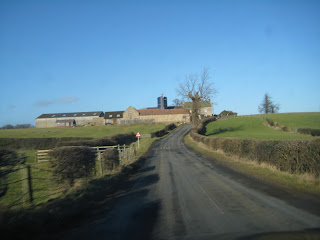 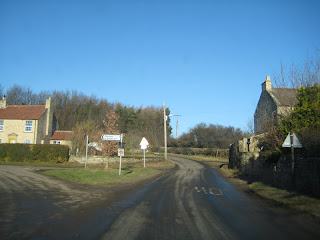 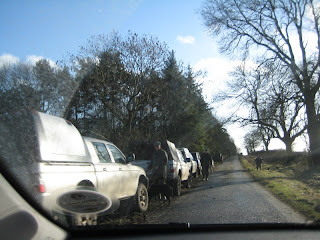 February 1st - the last day of the shooting season. Any pheasant still alive at dusk tonight is safe for another year providing he or she doesn't run across the lane at an inappropriate time.

The farmer and I have been down to the feed merchants in Masham for food for the hens, the dogs, the farm cats and the wild birds. We went by one route and returned by another - a round trip, as they say - because the weather is so lovely. Our new car tells us the temperature and it was eight degrees.

We passed by the vehicles of the last shoot of the season and when we returned they were just packing up to go. In the corner of the field a dozen or so cock pheasants were skulking - good for them - they have lived to fight another day.

There is just a faint feeling (probably in my imagination) that the earth is beginning to wake up. There is a bit of a green smell in the air (again maybe my imagination) and everywhere is looking lovely apart from the mud - every road and every verge is thick with mud. So I have put one or two pictures of our journey on for you to look at. They are not very brilliant, after all the car was moving at the time. (I managed to persuade him to come back a different way so I couldn't ask him to stop as well - after all he had a new door bell to fix when we got home and the instructions were in six different languages and nigh on impossible to follow even in English.

But the new bell (which goes da-dada-la-da-da-da-dah) is all ready for the recorded delivery we are expecting in the morning and the pheasants would be doing a fandango around the field if only they knew it was February 1st!


### The local hunt have just been to tell the farmer that they are hunting our land for foxes on Saturday - ah well, if it's not one poor wild thing it's another.
Posted by The Weaver of Grass at 06:21

No waking up for the ground here - the rumpled grass is still a bit stiff underfoot when I walk out to feed the hens, and I still have to break the skim of ice on the water bucket.
No hunting at all in these parts - one must go higher into the woods, and then it's just big game.

Because it's like spring here already, some of my plants have buds and color. I lost SO many to a terrible frost this winter - hoping they come back.

We had a cock pheasant in the garden today (no doubt breathing a sigh of relief as he's from Next Door's Shoot . . .) Oh, and I saw my first Snowdrops in flower, so first proper sign of spring for me.

It's still freezing here, where I am staying with friends, but we had a lovely walk in the woods.

I had that feeling today as well Pat. It's the first time I've been out and not felt cold. Yorkshire is looking beautiful in the sunshine and best of luck to the pheasants and foxes! I have visions of you inviting one in while the hunt passes by! It sounds as if your doorbell sounds is very melodious. Hope it wasn't a 'rearpain' (word verification) to fit!!

My previous comment sounds as if I don't speak English! I altered part of it and didn't read it properly - I think you can get my drift!

I don't get it. Don't you have the right to tell them that they can't hunt foxes on your land? Well, maybe the farmer doesn't mind if a few foxes bite the dust. I happen to like foxes very much, but then again I am not raising any small animals on my nonfarm that the foxes would want to eat.

I had a look around the garden today and the first shoots are pushing their way through. Lovely!

To clear up the matter of fox hunting. It is the farmer's land and he loves fox hunting. I hate it, but stay clear although I agree it is a fine spectacle. The good news is that they rarely get a fox.

i love the little world of northern england. it has contained so much of what is good and right about it. steven

Love your photos, I could do with a fox hunt here at the moment, nothing to kill them off and they breed up when we have calves (plenty of after birth) and then turn their eyes towards my poor hens. NOt being a native and not too many people shooting any more they are a terrible pest. (As are the rabbits!)

The thought of killing anything for sport amazes me but I'm not a vegetarian so try not to be a hypocrit about hunting. Shooting those beautiful birds ? no, but I'm not at all fond of foxes and the damage they do. The introduced ones have decimated our wildlife here. We don't have a natural predator like that amoung our gentle wild life ( crocodiles excepted of course !!!)
Cheers
Helen

Wish I was where you are. We have a major storm, 2 feet of snow coming into Toronto any moment now. The wind is picking up and it's going to hang around for the next 24 hours. The birds and pheasants here are huddled up in chilly dens trying not to freeze. it's 10 below. Enjoy the signs of spring for me, Weaver. it will be April before Toronto looks like your photos of Yorkshire.

I will keep you updated on the hunts visit on Saturday if they come our way - depends where the hounds take them.

I am with you on the fox hunting issue Pat - we have a village hunt too - brings many spectators, myself not being one of them There was an incident some years ago when one of the riders in all his splendour was by a group of hounds. He held my gaze as he whipped some of the hounds - I was enraged - had I not been there I don't think he would have done anything - especially with a sick smile as he did so! This poem by Charles Causley always makes me smile, I am sure you know it well...

Candlemass. That takes me back to when I was teaching year 2 infants in a C of E primary school and was asked by the head to get my children to create a wall display for the school hall on Candlemass!!
Try explaining that to infants and get them to be creative about it. I can't really remember just exactly what we did but candles did feature in it. Great to be reminded and as you say those days are now rarely referred to or celebrated.