Is feminism still an issue? 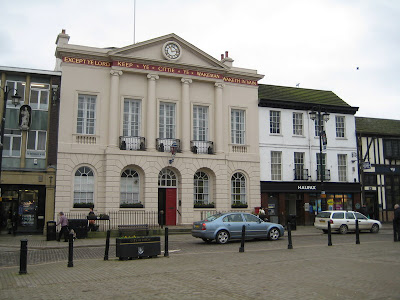 We have come a long way since the days of Germaine Greer and Susie Orbach - or have we? I am sure in some areas there have been great strides forward in the equality of the sexes (in the Western world) but there have also been some stumbling blocks, which no doubt will take generations to overcome.

Yesterday I read an article by Anne Robinson's daughter saying that her mother was absolutely obsessed with her body and had every kind of beauty treatment going. I must say that I had watched her on the new book programme earlier in the week and noticed that her face was so stiff with Botox that she had a job to smile. Of course this is her choice and she should be free to make it, but I do think that this kind of thing also sets the feminist issue back a bit.

But - here to some extent I hang my head in shame - there is nothing makes a girl feel so good as a hair do. A restyle or just a cut and blow dry and I feel a new woman. Today I have been down to Ripon (twenty five miles away) thanks to the generosity of my daughter-in-law (thanks K) as I can no longer drive, to get my hair well cut (by a man!). Do men feel this good after a hair cut I ask? Is the fact that I like a good cut going down the wrong road in the cause of feminism? I would be interested to hear your views.

And while we are on the subject of Ripon - it is a lovely old city if you are ever in the vicinity. It has a beautiful cathedral, parts of which are twelfth century and some lovely old buildings. It also has a hornblower, who since medieval times has come out into the market square at 9 o'clock to blow the horn - he is called The Wakeman. Crossing the market place on my way to the hairdressers this morning I took a photograph of the town hall for you to see.

I don't think there has ever been a female hornblower. If there had been then I could have tied these two diverse subjects up nicely. As it is, put it down to my butterfly mind again.
Posted by The Weaver of Grass at 08:39

I think everybody likes a fresh haircut. I got one this weekend :) and don't think it's a male or female thing. This Botox craze, oh dear. I see these people sometimes and think they look like cartoon people but I agree with you - a personal choice that I'm glad people are free to make for themselves. Whatever makes a person feel better I usually think. A hornblower? How fantastic. Did you publish the photo? I don't see one.

There are some good pie shops in Ripon Pat! Next time you venture out anywhere let me know and I will "arrange" for a couple of free samples for you! Dxxx

I think feminism is getting a bad name these days. Feminists want us to have our choices. We can choose to work outside our home, have children, to wear make-up, or to have nice hairdos!
Many choose not to have kids, to stay home with kids, to eschew make-up, but the key is that we choose.
It's about equal pay for equal work.
About respect for others no matter their status, jobs, houses, cars.
I love seeing the stay-at-home dads in Ontario. THey have choices, too!
So, you go! Feel beautiful!

Ripon Town Hall looks exactly how a Town Hall should look! Very solid and dependable. I don't see having a good haircut as a feminist thing at all - surely it's just a wish to look well groomed. When I have had a good hairdo it seems to take a few years off. So many women in the public eye feel it necessary to 'improve' their looks and make themselves appear younger by resorting to plastic surgery, etc. I don't think that many have succeeded, but as long as they are happy with the results, it doesn't matter. How wonderful that there is still a hornblower! Pity your appointment wasn't earlier in the day - we might have had a picture of him.

Yes, as a full-blooded male, I do like the experience of a fresh haircut. In fact, I'm having one tomorrow - just five minutes' walk down the village! At the moment I just can't do anything with it - it's hanging so heavy and shapeless that it's affecting my whole quality of life. Truly!

Good haircuts, nice clothes, whatever - are nothing to do with feminism, I believe. Personally, I feel feminism has gone from too far in one direction to too far in the other.

For instance, I feel both men and women 'feminists' should take a stronger stand against pornography, ie specially the sort that degrades women, which it obviously does (even if the women involved say it doesn't and are getting paid for it).

Plastic surgery should be personal choice but Botox should not under any circumstances be accepted. The only way it can be prepared safely is by testing it on animals.

To measure its strength they inject it into mice until they can no longer breathe. They are suffocated to death just so that Anne Robinson et al can no longer speak properly.

It's horrendous stuff and every woman should know exactly what it costs.

Of course feminism is still an issue, darling.

Feminism is about women having equal rights isn't it? That means equal rights to good haircuts, pay, rights and opportunities.Everyone male or female or other gendered deserves the right to feel good about themselves and if that involves haircuts go for it.

personally, i have know and been nurtured by some brilliant women who also happen to be very beautiful. Its what owns us, controls us, that needs re-stitching as thought, for men and women in need of some clean air to live within.

Feminism as a word is a pejorative now, isn't it?

If i say, You look beautiful, it doesn't strip you of power or knowledge or anything womens' rights might fight for. Beautiful.

weaver the snick snick of scissors around my ears, the gentle pushing back and forth of what hair i have left, well it's a small slice of heaven. steven

Well, I think I've had two professional haircuts in my life. But that's me. I would rather spend my money on yarn or roses or chocolate. I've never personally cared much what I look like other than reasonably clean (I always ask my husband to make sure there isn't a smug on my nose when we go to town). I do deplore an excess concern about a woman's looks as something I'd hope we'd outgrown in my lifetime.

I'm looking forward to my haircut tomorrow! I am feeling like an ancient Shetland pony with my long bangs (fringe) so its absolutely time for a tidy up. Next time it will be out with the bits of tinfoil and some chemicals to spruce up whatever natural blonde I have left! Grey hair is not an option for this blonde. So far, I've found people who are clever with that old bleach stuff and seem to understand that I want to look as if I've just come back from a holiday in the sun with a few well placed sunstreaks hither and yon! I have tried to do it myself but never liked the rather orange tinge I would get for not leaving the stuff in my hair long enough! I've had some good haircuts from both men and women stylists. Wearing my hair short as I do, I need haircuts more often than most to keep me feeling attractive! And as for the Botox biz -- "chaque un a son gout!" I think that's right.

Enjoy your haircut and feel safe in not having set the cause of feminism back. I think people should be able to adorn themselves as they see fit, as long as they know that they are as worthwhile with a $100 haircut as with one from their Aunty Marge who owns a shop in her basement.

We are the gender we are. We want to feel good about ourselves. It's not just about attracting a mate. One can wish to look attractive without necessarily wanting to attract anyone: it's about self respect. For example, men who think a woman is "asking for it" by wearing skimpy clothes have missed the point.

I should add that even "not bothering" about one's appearance is is one way of bothering about it.

I think that, like all 'movements', feminism has lost its way, had its way lost for it, been diluted and misrepresented until it has almost lost its meaning. It used to be about power or the lack of it. And freedom, or the lack of it. Those isssues remain, though in different guises. Surely, for a woman to be so unpleased with her own body that she will use any and every unnatural tool to change it, says a lot about her lack of power and freedom. Yes, she has financial power and freedom to manipulate her looks but is in thrall to an impossible ideal of 'perfection', not free to love her own body or confident that she may be loved for herself.

Enjoy your haircut. For yourself.

maybe that's why guys keep their hair so short - so they need cuts frequently!

I feel uch better about spending the money on a swish haircut after reading your comments.

Seems we are all more or less in agreement about feminism (I shall have to have a strong word with that Tom!) - a lot has been achieved and there is still a fair way to go.

Haircuts -
I gave my husband a haircut yesterday after he begged me. On bended knee virtually.
I mean non-virtually I suppose. Do I?

I hate doing it as I am crap at it. But most places are unisex now and he says he can't stand the twitty girls taking hours hardly snipping anything off.
He also questions the hygiene. So he either has a ponytail or I get roped in.
Where does all this fit into the feminist question I wonder :-)

And I wish Ms Robinson could have her voice fixed while she is at it.Sounds so harsh to my ears.