When is a weed not a weed? 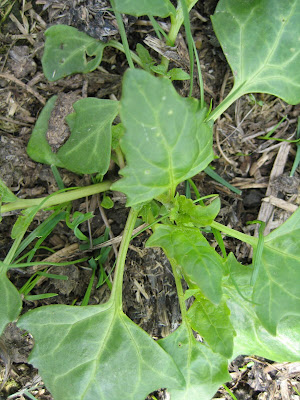 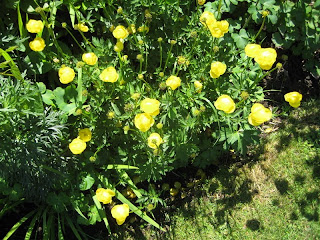 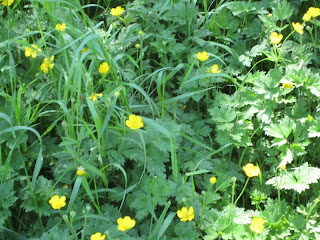 I have just been on my after-lunch walk with Tess - down the lane as usual - and I must say it is looking spectacularly lovely. Fringed with a positive froth of my favourite cow-parsley, and in the deep grass beds of buttercups softly glowing in the sunshine (yes - it is shining today), pink campion standing tall in front of a bank of pretty ferns, the leaves and buds of meadow-sweet promising a feast of cream in a week or two. Sometimes 'Nature's Garden' puts on a splendid show, doesn't it?
A vicar once leaned over the hedge and looked into a woman's garden - it was perfection. He called to congratulate the woman who was weeding - 'Isn't it wonderful what God can do in the garden?' 'Ha!' said the gardener. 'You should have seen what it was like when it was left to just God doing it!'
Because, yes, we do like to be in control of our gardens. It is always a temptation to leave buttercups for me. I do love them - and if you call them by their 'proper' name - ranunculus - they don't sound quite so invasive. But invasive they are and that is probably why we call many of our indigenous plants 'weeds'. I have a patch of Trollius (globe flower) - see the photo above - and it is lovely but it doesn't have the depth of yellow of its cousin, the buttercup.
But this week a 'new' weed has arrived. Well, it did pay us a visit a couple of years ago -but this time it has arrived with a vengeance - and it has brought back childhood memories for me.
Many posts ago I showed you our growing manure heap (yes - I am mentioning manure again - )
well, now it has been cleared and spread with the mighty spreader - and where it has been there was a bald patch. Before we went on holiday the farmer sewed it liberally with grass seed. hoping that by the time we returned it would have filled in. No rain while we were away- so no such luck.
At last tiny grass blades are pushing through - and tiny rabbits in their warren not ten yards away in the hedge-bottom, adore new grass shoots (think tiny, tender lettuce leaves for us).
But something else has colonised the bare patch. Goosefoot.
It's 'real' name is Good King Henry - although the name comes from the German Guter Heinrich, and we added the 'King' bit when it meandered over here. The sixteenth century herbalist, John Gerard, said the plant grew in 'untilled places'. Other sources say it is the scourge of manure heaps - so no surprise there then.
But what is surprising is that I recognise it because we had a cultivated patch of it in our veggie garden when I was a small child in Lincolnshire. Remember this is well before the days when veg were flown in out of season - the days when if you lived in the country you ate what was available in your garden. You didn't go buying fancy vegetables!
My mother called it 'markary' - I am guessing at the spelling here - and we ate it as you would eat spinach. Father kept cutting it and bringing it in to eat and it would quickly grow up again.
He often called it 'poor man's asparagus' although I think that was pushing it a bit.
Reading about it in one of my 'flower' books I find it was commonly eaten in olden times (yes, I know I am getting on a bit but that is going too far). The books says it has been replaced by a cultivated form of spinach. But then , reading on, I find that there is a similar plant called Common Orache which the book says was eaten ' until fairly recently'.
So it seems we have a patch of vegetables in one of our silage meadows - so come on rabbits, get it eaten off before the silage men come in - otherwise it will be left for the cows to eat over winter. I shall be interested to see if anyone remembers eating this stuff or whether it was confined to the wilds of the Lincolnshire Fens.
Posted by The Weaver of Grass at 06:10

I let some of my weeds be flowers.

A weed is only a weed if you don't want it growing where it does.

(But it helps if it has a pretty flower, like the oft-maligned dandelion)

A weed is a a flower as Eric said it just have the misfottune from our perspective to be growing where we don't want it to! How arrogant are we!

We have a wonderful gardener here in town who has published several popular books. His first was entitled, "The Well-Placed Weed". I think that pretty much sums up my feelings! If I like the way it looks... it's a flower!

As long as my weeds are happy to share the space with their less invasive neighbours, I an happy for them to be there. Far less work to do too.

I'd certainly eat GKH if it was on my patch. Another member of the Goosefoot family is Fat Hen, so-called because it was good chicken feed. Our native wild plants were the only vegetables available to early people until selective propagation took place, so they're certainly good.

I collect old gardening books (to be honest, I collect old books. And new ones) and one of them had a question and answer section: Q: how can I tell if a seedling is a weed? A: Pull it up. If it comes back, it's a weed.

This year I seem to have a rather large patch of creeping buttercup, but it's so pretty I'll let it be for now.

We used to eat a lot of curly kale in rural Norfolk when I was a teenager (one of the few crops the mice, rabbits and pigeons left alone). I have a feeling there was something else rather similar, too.

We used to talk about 'greens', which I suppose could cover a range of brassica-type species. Delicious!

These days I adore baby chard - perhaps for the colour, as rocket definitely has more bite.

Oh, and we used to 'grow' horse radish (which actually grew itself, and looked like giant dock leaves). I can smell it now

I had the most wonderful buttercups when I got back from my recent week away Pat, and enjoyed them for a while but in a small garden they have to go before they get too much at home. Good King Henry is mentioned in some modern herb books and regarded as a good plant to have in the garden. I had red orach as a present from the birds one year - it's quite attractive. Weeds? - if I like it and it's not invasive, it stays.

What's a garden without a weed or two! A house isn't a home without a little clutter!

hello weaver! a weed (from my perspective) is a weed by perception only. they carry the same sort of beauty as cultivated flowers for me. having said that, i leave them be in my garden for may, june and part of july and then move out what i can to allow for the introduced plants to have a bit of breathing and visual space. it's lovely to see you back and in your home again weaver. steven

Ah, it takes courage to let things be, to enjoy nature's meanderings.

I always remember my brother being absolutely horrified about forty years ago when he moved to rural New Zealand and discoverded his neighbours pulling out beautiful (to my brother) fuchsias to grow lantana - a gazetted noxious weed in Queensland! As Eric said, a weed is only a plant in the wrong place. Cheers, Robin

Thanks for the comments - seems we all used to eat our greens in 'the old days'!

Oh our land is full of weeds/wild flowers! I love them where I want them but we do seem plagued by the creeping buttercup on the veg plot. Some of the 'grass' Jim mows is really just buttercup with a bit of clover thrown in! I love ragged robin though and speedwell and of course we have lots of orchids too!