The Eagle has Landed. 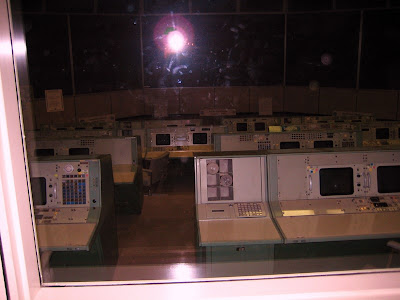 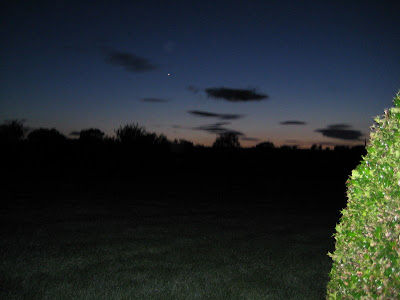 On the fortieth anniversary of the Apollo 11 moon landing, it was fitting that we should be able to watch the International Space Station - 220 miles up - as it traversed across our bit of the planet last night.

We went into the paddock at 10.30pm and watched and waited. It was due to arrive within our sight at 10.35pm. At precisely that time I remarked on the beauty of the Northern sky and decided to take a picture of it regardless of the Space Station. Seconds later we saw it - and when I looked at my photograph I am sure that the light you see is the Space Station. It moved silently across from North to South and then it was gone.
At present there are thirteen astronauts on the station, six men and one woman having arrived last week on the Shuttle Endeavour. It seems that yesterday was spent repairing the nineteen million dollar lavatory (sorry, waste and hygiene compartment) which had malfunctioned.
Mission Control at Houston sent them a radio message which said they needed to put an "out of service" message on the door.
We almost take space travel forgranted these days - that this machine should orbit the earth does not seem all that amazing any more. Maybe it is time we tried to put a man on Mars.
The other photograph is of the original mission control for the moon landing forty years ago. I visited the space centre at Houston last year. Does it all look terribly old-fashioned?
Posted by The Weaver of Grass at 04:53

Think I prefer to believe in the cream cheese version - tasty!

hello weaver, i had a good laugh about the space toilet troubles. it's probably not as funny for those up there flying past above our heads, but really it brings the incredible technology and extraordinary human achievement down to a more manageable level when you remember that if you're not "flushed with success" life stinks!!!! have a lovely day. steven

We have indeed become so blasé about such absolutely astonishing feats that you have to wonder if the spirit of genuine adventure hasn't already winked out among the human race. Why are we not thrilled by true explorers?

That we can become more excited collectively, whereby local news outlets devote more page space and air time to covering the opening of a new theme park or shopping complex, while thirteen of our fellow humans circle the earth from a space station, is a sad and sorry commentary on the wizened hearts and souls of people whose ancestors once sailed off upon unknown seas.

I must admit I am too fascinated with this earth to travel far away.

There is so much injustice, poverty, and earth-issues to resolve.

Pretty frightening to think of the lunar landing and it's antiquated technology compared to that of today's.

Whilst I admire the knowledge, skills and bravery which have gone into all the space programmes I can't help thinking that we should perhaps be spending that money on the planet we inhabit, rather than run the risk of endangering another one. I hope that doesn't make me a party pooper!

i confess i'm just as amazed by it all as i was 40 years ago, at age 11. (not sure what that says about me.)
i do love your blog--both poetry and prose. and photos.

How interesting and exciting that you really visited Houston! I remember the first moonlanding very well. My eldest daughter was then 2 years old.

As I was reading the others comments, Steven's comment is so funny, I just had to laugh...Grizzled is very thought provoking...

Now on to my comment...I remember very well watching the moon landing. I think it happened about 2 o'clock in the morning in my area of the world, Anyway, we had stayed up all night that night and watched and waited until THAT MOMENT arrived. It was almost surreal, what a thrill it was as we watched him climb down the steps and put one foot on the moon and then the other one...and the rest is history.

I am so glad you got the picture of the Space Station flying by and thank you for sharing it with us. Enjoyed your commentary also very informative.

Hi Weaver, I think its about time we did something a bit special to put the world back on it's feet. I'm all for saving this planet and the people on it but it seems to me that since the hippys took it over we're neither saving the planet nor exploring it's horizon's. You have to keep pushing the boundaries or you get left behind. Bob

Two fascinating photographs. My husband loved the first and I am dashing out tonight in the hope of catching my own glimpse.

It is good to jog our memory about how far we have come in space exploration. Thanks also for reminding me to look for the space shuttle. It may go over our latitude as well. I've seen it before. But, as you said, we often tend to take such amazing things for granted.

I still find it terribly odd that people leave Earth. I just don't get it, but then that's me.

Mission control just looks like a lot of old caravans...how disappointing. Do we really need to pollute space as well. For my money there is enough space junk floating around already.

What a wonderful photo Weaver, I'm sure that is the space station. I love Steven's comment!! I thought that the first photo was a caravan site at first! Have we moved on since then? I suppose in some ways, yes, but I weep sometimes for our drink fuelled youth.

I once heard that the Apollo mission had computer capacity of 64K. Don't we have like a bagillion K now?

Funny about the toilet. The light in the sky reminds me of when the space shuttle flew over our home a few years ago. By the time the vapor trail evaporated, they had already landed in Florida. Quite the site.

Have visited the space center in Houston also. Seemed odd to view the Mission Control room and think of the history.

Jinksy's cheese idea - Steven's joke - Scribe's suggestion that we have really lost the plot - several of you suggesting that the old control centre looks like a caravan park (it really does - as you probably realise it is behind glass) - there are rows of tiered seats so that you can sit and listen to the commentary - not many of you seem keen to go to Mars, although I do tend to agree with Bob- push the boundaries or we will get left behind. Thanks for all your useful and interesting comments.

It is fascinating to think of the ingenuity required for man to do this sort of thing even though many of us don't seem to appreciate it so much. Landing a man on Mars would excite folks again but I agree that there are still things we don't know/understand about Earth.

You know I still get a little thrill at the whole moon landing thingy. I remember watching it on the tele (I was such a wee tyke then)and I still have the original newspaper articles from the Aussie newspapers of the time, although they are getting rather fragile now. It was such a brave thing to have done and must have made everyone of the people involved so proud of their little contribution. I agree with Grizzled, we are definitley too blase about this achievement these days. How many of us tune in to a launch now? Mind you I think I'm going to look twice when it rains now that you have mentioned the loo is out of action, LOL!