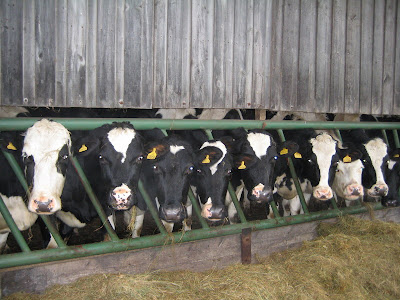 Our loose-housing now has its full complement of cows and heifers- thirty of them - all pedigree Holstein stock and many of them Prize Winners. They belong to our neighbour, who has a Holstein Dairy herd. As we no longer have cattle of our own we over-winter some of his stock for him.
About three weeks before their calving date he will take them back home and feed them extra "ration" to give them a pre-calving boost and also to get them used to eating the ration again so that when they go into the parlour they will eat it readily.
Taking the calves away from their mothers is always a tricky point of discussion amongst non-farming people. For anyone reading this who doesn't understand the process (probably the same readers as those who were not sure of the significance of ewes' red bottoms), after birth the young calves are separated from their mothers. The mothers are individually milked and that milk is then given to the calf (by bottle) so that the calf gets that all-important colostrum from its mother. Quite often the calf has instinctively sucked from the mother before they are separated anyway. Some farmers leave the calf with its mother for a day or two but eventually all the calves become bottle/bucket fed.
It seems hard. When I first came into a farming family fifteen years ago I hated to hear the mother calling for her calf. But, of course, a cow gives the most milk when she is newly calved. And the cows forget quickly and the calves always seem happy playing and eating together in deep straw.
In Summer, when the herd is out to grass, calving usually happens in the field. Then the calf and its mother are often together all day. In the days when we had a Dairy Herd (before having Foot and Mouth Disease in 2002), we had a wonderful old cow - Number 55 freeze-brand - who used to steal the new-born calves from their mums out in the field. When we went to call them in for milking she would be at the gate watching for us, proudly saying, "Look what I've got!" She made our work easy because often the mother would be happily chewing the cud oblivious to it all.
One of the saddest things about Foot-and-Mouth was that all our stock, sheep and cows and calves, had to be killed and burnt on our premises. The animals were lined up in the field waiting to be craned on to the top of the huge bonfire - and to see number 55 like that was so upsetting because she was such a character.
But farmers are resilient - they have to be by the very nature of their job. Most farmers love their animals and wouldn't be in the job otherwise. There are exceptions but thankfully not round here, where all the stock look happy and healthy
The sheep are at last beginning to eat the hay and the sugar-beet nuts we are feeding them every day. These hefted sheep from "the tops" hold out against it as long as they can. If there is snow, rather than eat the hay they will clamber up the hawthorn hedge to see if there is any greenery left there. But, at last, they have got the message that the hay in the hay rack is there to eat and that the line of rooks standing along the sides of the trough are eating the sugar beet nuts put there for sheep not crows. In fact they run calling to meet the farmer when the tractor comes into the field. Not for nothing has the expression "follow like sheep" entered the English Language. One-come-all-come is their motto!
Posted by The Weaver of Grass at 03:05

All that must have been heartbreaking. You can get so attached.

I've never had anything to do with sheep - it seems they're not the brightest!

Oh Weaver, Thank you for sharing your life with us. It is so interesting and helps us to understand first-hand about life on a modern farm.

Best wishes to you and your family.

Oh, Weaver, We had a beef farm and kept one milk cow. I remember the noisy cows and calves when they were parted. We retired 10 years ago, sold the farm and moved 850 miles away. I don't miss it one bit. It was a wonderful place to raise a family, as the saying goes, but the children are all grown with families of their own. So we decided to move on and enjoy our "golden years" somewhere else. And so that is what we are doing.

That must have been an incredibly difficult ordeal. So sorry......

By the way how did you get the heifers so well lined up and looking straight into the camera like a row of beauty queens? Fab shot.

Those girls are pretty! WT grew up with Holsteins in Kansas.

Your posts are always interesting, Weaver. Farming life is not easy but it has its rewards. I grew up on a farm although my father was not a farmer. He rented the house from a farmer who let us keep a few animals on his land. I always had horses, a cow and pig, chickens, geese, dogs and cats. It was a wonderful life. How devastating that you lost your animals to such a horrible illness. It would have been too much for me to bare to watch beloved animals being destroyed. So sad.

Real pedigreed beauties! At least you don't have to deal with the milking. I grew up on a dairy farm and it seemed we never went anywhere because the ladies must be cared for morning and night.

Interesting read as usual and so sorry to hear about your foot and mouth experience. it was a nightmare.

What a fascinating account of farming - and the devastation of foot and mouth desease. It is all such a contrast with sheep and cattle rearing in Australia. My sister and her husband had a sheep and cattle property in western Queensland - 58,000 acres - just a bit bigger than Yorkshire farms! Obviously farming practices have to be very different because of the size, and thank goodness Australia does not have Foot and Mouth. I love your posts. Cheers, Robin

Thanks for the comments - glad to know you enjoy what I write. It makes me keep writing!

I am far too sentimental to make a farmer or a good farmer's wife. I was so sad and angry for farmers in general during the Foot and Mouth crisis as it seemed to have come about through sheer carelessness on the last occasion. It must have been heartbreaking. How exciting to find a stone axe and flint tools on your land. I used to find clay pipes in the garden of one of our earlier houses, but nothing earlier than that, and I am not sure I would recognise very early fragments anyway. I am fascinated by early history and archaeology.

Hey Pat....GREAT post. When all that foot and mouth stuff was going on I had a hard time understanding why ALL the animals had to be put down. Its a terrible loss for you I know. I cant imagine loosing the animals we have...devistating. I hope that you all have healed from that. Farming is hard on many levels, nothing as hard as loosing one of your "family" like that, they are after all family. At least for me. a terrbile disease like that can happen anywhere at any time though! No matter where you are in the world. Dairy farming is the same all over tho, Liz in NZ says it goes the same with the calves, what people dont understand are that we do LOVE and care for each and every animal, and we arent cruel to them, they are not like humans when a calf is taken and they do forget in very short order that they even had one. Our last weaning, they didnt bawl but for a few short hours...wean when the moon is right makes a diff. Love the pic of the ladies in a row...however did you get them to "pose" like that? LOL I sure have missed reading your blog, now hopefully time and Google will be on my side! LOL Stay warm in all that snow! We are getting a winter storm here, lots of ice and snow falling! Missed ya!
Luv to your fam! -Rae

I love all your posts, but this one made me so sad. If is terrible to see the wanton destruction of stock when buffer zones for virulent diseases are needed. It is like mass murder by decree.
I am sure you were not as stoic then as you sound now.