Nostalgia for the past.

I think people who live in the countryside have far more nostalgia for the past than 'townies' - after all there is far more to be nostalgic about.

And yesterday, as we drove up the lane to go to Hawes, we had a perfect example when we stopped to allow this to go past.  What a glorious way to travel about the countryside in the sunshine. 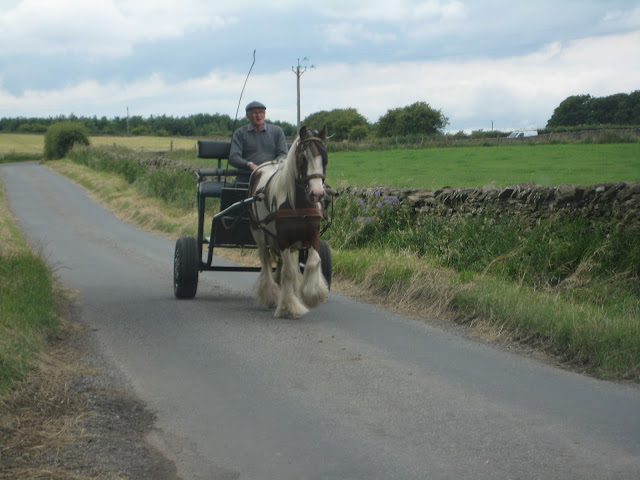 She giggles politely ;) so they have made it up to you Pat, think I'm going to get a pony and trap and be part of the growing trend.... I can just imagine all the traffic growling with fury behind me as we make our slow pace to Pickering!

Beautiful! I'd hop a ride anytime.

He who drives the jogging cart looks remarkably like your esteemed spouse The Farmer :) ?

Perhaps you'd be surprised to learn that I was once treated to a ride around Berkshire countryside in a childhood friend's pony cart. It was an amazing experience.

Skipping back a post, I must compliment you on the menu for your dinner party. Everything seemed perfect for a summer gathering.

Nostalgia can arise in cities. As I walk around, I remember wonderful old buildings that once stood on land now occupied by steel and glass towers. I remember vanished bookshops, small movie houses that showed films from abroad, reasonably-priced restaurants run by families who'd emigrated here just before World War II, fabulous bakeries, a large flower market district, a greater sense of community. And more.

We have ponies and traps in the streets in town here!

I always get excited when I see a pony/horse cart. I hate cars, realize how they've made our lives easier, but I think I was born in the wrong century.

Yes indeed - three cheers for Yorkshire. Whenever I see a pony and trap I always think it must be a lovely way to travel, but not in heavy traffic! My grandmother used to take her children to school one when there was hardly any motorised traffic.

Oh how I would have loved to come up on that.

Some of the gypsies use them around here. Most use transit pickups, they can get more stuff in the back.

I used to drive a pony and trap when I was very small. Our Surrey village was very quiet, and on Sunday lunchtimes I'd often drive several miles to pick up father from a country pub.

As for townies and nostalgia... I'm not sure. During the time I spent living in both Halifax and London I was very much aware of the past all around. I'm not sure about nostalgia, but one was very aware of the way people had lived, in the past, in both those places.

As for townies and nostalgia... I'm not sure. During the time I spent living in both Halifax and London I was very much aware of the past all around. I'm not sure about nostalgia, but one was very aware of the way people had lived, in the past, in both those places.

Three cheers to you Pat! I'm still nostalgic for Cumberland and Westmoreland! And Barrow in Furness being in Lancashire!

I think townies can be just as nostalgic. You only need to listen to people in the Black Country talking about 'the cut'.

Lovely to see - but not so idyllic on a wet and windy day.

I loved to see that photo...your countryside is so green, the horse and cart a fun looking ride and adventure.

What a pretty horse. I love horses and carts and would like to ride in a cart one day. I have been on a few short horse drawn carriage rides, but what a privilege to have a horse and cart of one's own.

I asked the farmer about the possibility of the horse being scared by something and suddenly bolting (which would be quite scary). He looked at me sternly and remarked that to drive a horse and trap you had to have complete control of a horse!!

A friend this morning also remarked that it was a really romantic idea to have a pony and trap but remember that when you get home you don't just put it back in the garage - you have to rub the pony down and feed and water it and then clean the tack and put it all away. That rather put me off the idea - I think it is one of those ideas along the lines of ' it is better to travel hopefully than to arrive '.

Having cleaned a set of driving harness I had for sale, I can tell you it is a long-winded job, especially if it has got muddy or sweaty or both! Keeping a driving pony isn't idle work either, but I guess the gypsies don't bother with all the titivating and just tether the pony out and chuck the harness down without cleaning it.

You do need to know what you are doing when driving though, but horses DO occasionally get scared and I had a friend who used to give pony and trap rides, until her pony (whilst standing still) was bitten by a dog and plunged off the hard standing beside a beach a couple of feet down onto the sand. It gave them all quite a shock.

A smart turnout in your photo though, and lots of feather on that cob.

What a beautiful horse.
It must be so wonderful to see that coming down the lane.

That's one of the things I like about village life. Often see people out on horseback or the occasional pony and trap.

I live close to Holmes County, Ohio and about six times a year my daughter and I go to the Amish area to see people plowing with draft horses and all the buggies on the road.............