Our kitchen window faces due West so that we get sunsets beautifully.   But for some reason the birds are always hitting the glass.   Last week a collared dove hit the window head on with such a crack.

I went outside to look and there was no sign of it, so it must have flown off - even if it did have a headache.

Yesterday we noticed in the fading sunlight that there was a perfect imprint of the collared dove on the window.  Not a perfect photograph of it, sadly, as the sun was reflected.   But nevertheless quite an interesting image.   I thought you might like to see it. 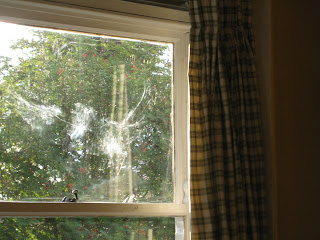 We have the same problem with birds hitting our glass storm door when we leave the front door open - allows more light into the entry way. I think they see the reflection of the garden in the glass and just keep flying. Usually they are OK and disappear, but now and then I've found a little bird standing on the front porch with the wind knocked out of its sails - thankfully they always recover!

You can get stickers to put on the window and make it easier for birds to see the glass. If it happens regularly they obviously can't see it well. I used to have the same trouble with my kitchen window, but now I have small butterfly stickers on it and I haven't had any feathery collisions since.

A headache indeed. Sadly a problem we face quite often too.

The birds around here keep hitting the big bay window out front too....Mostly glancing blows and if i look quick i can see them fly off.... sometimes they fly DOWN instead of off... I have seen them knock themselves out! I mean totally flipped over lying on their back , belly up knocked out. I thought for sure it was dead... A few minutes later it was sitting up with a dazed look about it and a few minutes later it flew off... Silly things... I may have to find some of the above mentioned stickers... :) I would hate it if one actually broke its neck... Hugs! deb

Shook all the dust off its feathers!We have the same situation, though in thirty years only two birds we know of lost their lives. One woodpecker my sister held in her hand for half an hour and later put him high as she could reach in a maple tree. He was gone in another half hour. We hoped he flew away.

Some birds learn and some birds don't.

I often get Wood Pigeons and Starlings flying in to the kitchen window but I've never managed to get a photo yet. Well done. I've gone in the garden after a hit to see what they could see and it is a reflection of the sky at certain times of day so the birds think they are flying in the clear.

Glad it was able to fly away. I can't tell you how many birds have broken their necks on my house windows. I always lay them on top of the hedge just in case.

We have had similar experiences with the glass in our back door. Over the years several birds have flown into our windows but I can't remember any of them not recovering. They must be a lot tougher than they look, thank goodness.

My windows reflect the sky and clouds so the birds think it is the sky and always run into them.
I don't want stickers so I have been experimenting with prisms and tiny mirrors that turn with the breeze.

I can see the image clearly. Amazing.

We used to get deer clattering into the house.

That is an amazing photo. We have had "resident" male cardinals who see their own
reflection in the glass and evidently think another male is invading their territory. They dive bomb the perceived intruder trying to scare him off. They'll
do it for hours. One unfortunate fellow knocked himself to the ground right into
the jaws of a lurking feral cat. It wasn't a pretty sight.

Owls used to do this quite a lot when I was a kid. Most of the birds around here seem to learn about glass from birth. Strange.

Thanks for calling. I was quite pleased with that photo and only just in time as the window cleaner called this morning.!