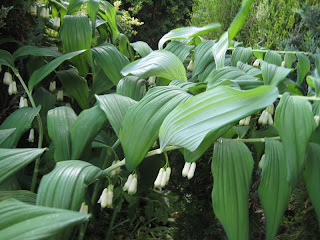 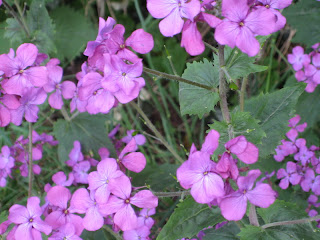 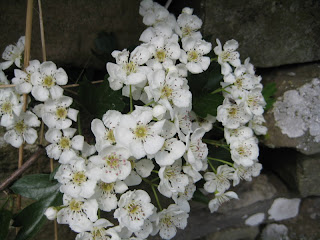 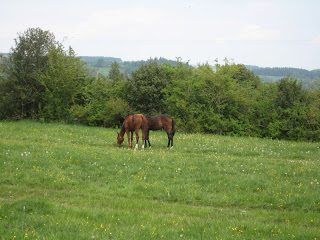 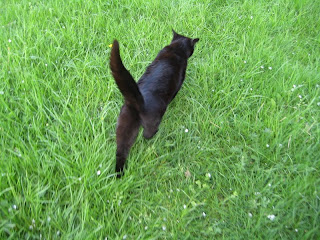 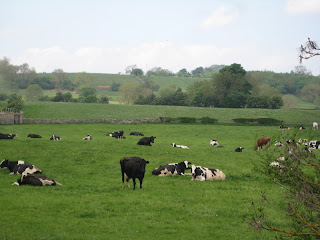 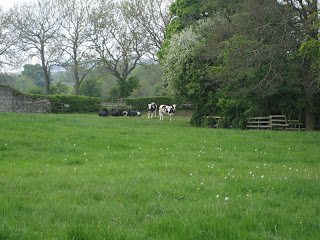 While we have been away in Tuscany the last of the over-wintering in-calf heifers have gone out to grass, so the yard is now empty (apart from a rather large rat which the farmer saw dozing in the straw where the heifers had been!). Tess and the farm cats have been told about this intruder and a trap has also been set - so watch this space.
If we do not get a substantial rain in the near future then the situation will become quite serious for dairy farmers. To keep up the milk yield the cows have to have their Summer pasture (although we are no longer a dairy farm, we rent out our fields to our neighbouring dairy herd) and the grass is so short of water that it is not growing very quickly. This means that the cows are grazing the silage meadows as well as the pastures. This is fine for now but does not bode well for Winter if the silage crop is less than usual.
In addition the water in the beck is quite low and although there is plenty of water to drink on our fields our neighbours further along the beck are really worried about the flow of the water.
I also wonder about the ground-nesting birds and how they will fare as the grass at present is hardly high enough to conceal their nests.
Still, as the farmer is fond of saying, we shall have to take what comes where the weather is concerned.
Tess and the cat both accompanied me on my walk today. Here and there bits of May blossom are out, there are a few buttercups in the pastures and huge clumps of plantain are already going to seed. I did intent to go into the wood and photograph the bluebells for you, but the young heifers had settled down in that corner and I didn't want to disturb them - so I took a long-range photograph of them instead.
Baby rabbits abound in all our fields - they are so pretty but, sad to say, the farm cats regard them as easy meat and at present are not eating any food we put down.
Any day now ewes with lambs at foot will be arriving - I will keep you posted on that one too.
I found Solomon's Seal and Honesty in flower - yes Summer is almost here. In addition the first two young race horses have arrived. I called to them over the fence but they were not interested so I took a long range photo for now - hopefully they will get a bit more friendly after a day or two, although race horses are usually pretty aloof.
Posted by The Weaver of Grass at 10:35

Welcome back! I'm sorry to hear about the water problems. I hope some consistent rain eases things. Where I come from in Canada, the forest fire risk is already on high, and it's not even summer yet. It's so easy to forget how reliant we are on water.

I have been missing your posts, but was very glad to see and read that you had had a lovely holiday in Tuscany. Everything looks so lush on your farm, that it's hard to imagine that water is short. Not that I wish bad weather on you, but maybe a few days of big rain would help fix the problem!

Although it is so good to be enjoying the warmth, thank you for reminding us that it also has its drawbacks. Hope you get the much-needed rain soon.

Interesting to hear of yourlack of rain.Here on the west coast of south australia we hd a lovely rain yesterday, but very little at home where before we left we were begining to run out of rainwater in the tanks, unheard of for the start of winter.

Ditto for all the farmers here, Weaver. Your Solomon's Seal is the image of mine. Do you get those caterpillars that strip it bare in a few days but don't touch another plant? A bane, but fascinating too.

Welcome back, Weaver!
The situation is much the same here, with a drought last year and more of the same expected this year - dire for some farmers on the Prairies.

I'm sure you had a fabulous time in Tuscany. Enjoyed your photos of what's in bloom in your area. Will have to look up Solomon's Seal and Honesty... not familiar with either one (yes, I know I'm leaving the door wide open for comments as to my ability or inability to distinguish the truth on that last statement!).

hi weaver it's so great to have you and your blog back! tuscany! lucky you! i wish you rain - it's going to be scarce for a while i think. have a lovely day in the dale. steven

Sounds like life on the farm is brimming with new life. Would seem our drought of last year has descended on your part of the world. I'll hope for rain in your area.

So lovely to hear about -- and see England in the spring -- especially Yorkshire. Looking forward to seeing the lambs.

Thanks for the comments - there is a little rain this morning and it is dull - and ten degrees colder!

Oh Titus - I wondered what stripped the Solomon's Seal bare - they haven't arrived yet but I shall look out for those caterpillars.

And Jinksy - I shall definitely not be taking a photograph of a dismembered rat!!

Good to have you back and to have the seasonal narrative, visual and verbal, resumed.

Yes I've been very aware of how dry it is too. It feels wrong, even though it's been great at keeping the slugs at bay. Today we've had drizzle for many hours so far, which helps a tiny bit; more rain forecast for the next 2 days.

Lovely images Pat - your garden must be looking lovely.