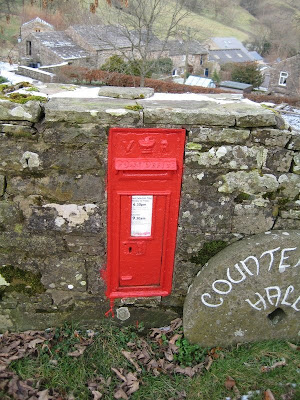 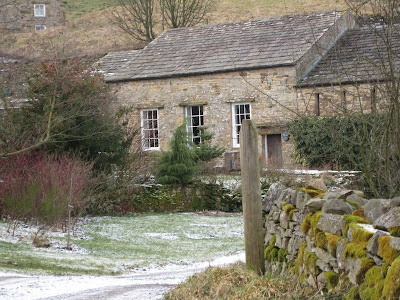 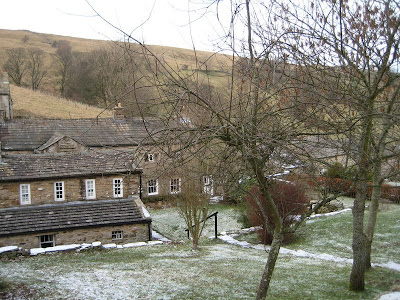 The saetr was a shieling, or a place where the Norseman summered his animals. In Wensleydale there are four villages with the "sett" ending - all in the area near to Semerwater (see my earlier blog). The nearest, which sits almost on the edge of the lake, is Marsett; Countersett is just back from the lake side, up a hill; Burtersett and Appersett are a little further afield. All are evidence that the Norsemen settled all over this area. I wonder how many of the really local people have Viking blood.
Appersett is a mile to the West of the market town of Hawes (home to Wensleydale cheese). The village has only a dozen or so houses and it sits on the bend of a tributary of the River Ure, just before the two combine. Interestingly, it has a big, communal village green where people leave their cars, dry their washing, kennel their dogs - I can't help but wonder if that was originally the shieling.
Burtersett is a couple of miles east of Hawes and sits on the side of a hill overlooking the valley of the River Ure in a part where there is a classic meander. This would have been an excellent place to look out for trouble brewing in the valley.
Marsett has only about a dozen houses and is by far the most remote. There is a road into the village and the same road out. From Marsett to go on into Raydale and a few isolated farms, you need to take a dirt track or a footpath. In the years when snow fell in huge quantities up here Marsett would be cut off from the world for weeks at a time. There are stories of postmen with bicycles trecking through the snow on Christmas morning to deliver a few cards and staying on to eat Christmas dinner with the families.
The photographs today are of Countersett, which, although a very small village, seems always to have been a thriving community. This was in large part due to The Quakers, who had a big following in this area. The Friends' Meeting House in Countersett was built in 1710 and in 1772 they also built a school in the village - a very forward-thinking thing for that time, I would have thought. It is a pretty village, built high on the side of a hill overlooking the lake but then down in a dip so that it is sheltered. It really nestles into the side of the hill very neatly. The photographs are taken from the road , looking down on the village.
I took the photographs two weeks ago. There is a timeless quality about Countersett. It even has a VR postbox let into the wall - there aren't many of those left!
Posted by The Weaver of Grass at 02:57

Lovely photos and story of a lovely part of Yorkshire, makes me yearn to revisit. Cheers, Robin

The post box is a real icon of Englishness and a beautiful splash of warmth in a picture oozing cold and countryside.

You're making me homesick! Thanks for sharing the photos - love to see the stone buildings and English countryside.

Thanks again for the tour and history of your area. I like the moss growing on the stone wall. It is too dry here for moss to survive anywhere but in damp dark places.

Come again by all means Robin Mac = we love visitors in The Dales.

Yes Jinksy - the old post box does mnake a good splash of colour.

Sal - thanks for the comment - I think the whole of our country can look stunning on photographs, I expect we all have our favourite places.

Sorry to make you homesick Teresa - living in such a fantastic place as you do, I am sure you will soon forget about coming back.

Leenie - moss is one thing none of us here is short of - it grows thickly everywhere.

I love the postbox Weaver! And the photos are great. I think the earliest building we have here in New Zealand is about 1830 but I could be wrong. Of course our history is far older than that.

This is exactly how I imagine that Herriot's Yorkshire Dales looks like! I love those typically English houses.
The Vikings settled all over Great Britain, even the British Queen has Viking blood in her veins, being a descendant of William the Conqueror.

It is so comforting to know that there are still a few places unaltered by the passage of time. Your photos remind me of villages from my childhood and the VR postbox must be a local treasure.

How wonderful - I had been looking forward to hearing about the Setts from when you mentioned them in an earlier post!

I love the story of the postman having to stay for Christmas Dinner!

Stone walls give the loveliest texture to a landscape, and these are such a soft grey. The red postbox pops out! I regret that I knew so little about your area when I visited it years ago, but I'm really enjoying your posts.

There's something reassuring about the sight of the old letterbox. It's an icon, as jinksy says.
The setts remind me of Settle, a lovely town where I once bought a waterproof jacket!

I suppose, madbush, when you think about it all our histories go back the same amount of time - it is just that some countries have more visible than others.

Thanks for that piece of information reader wil, I hadn't thought of that!

Thanks to both Hildred and Heather - glad you enjoyed the post.

Raph - that postman story was true of many parts of the Dales. In the "old days" postmen travelled vast distances by bicycle and there was still a delivery on Christmas Day.

Bdogs - you will have to visit our area again!

PiR - never thought of Settle - I suppose that is another Viking settlement. We go there sometimes. It made news over New Year when the owner of a Hardware shop wanted to give his assistants the day off so he left the shop open, left a pad and pencil on the counter for customers to write down what they had taken, and an honesty box for the money! He took around £200 on the day and everything was left shipshape!

That little story restores my faith in human nature! It reminds me of a B&B place we stayed at in Galway, Eire. The lady said, Go out and come back when you want, you don't need a key. I haven't locked my front door in 50 years.

Oh, those pictures speak to me. I'd love the opportunity to walk there, take pictures, eat a bun. Not so sure about the bun but it does come to mind. (Maybe I need breakfast.)

Woman in a window - buns, cakes, biscuits - why is it they are always on our minds?

That VR postbox is worthy of a museum place. Beautiful photos of beautiful places.

Yep..you're almost making me homesick, but when the sun's shining and (despite the cold) the sky is blue,and the air is dry my 'home thoughts' disappear.
Your research on the Norse word 'sett' is very interesting There are a few in Norfolk...off the cuff I can name Hethersett, on the outskirts of Norwich, but the same Viking connotations can be applied to the 'by' attached to the endings of many village names in East Anglia...Billockby, Hemsby, Rauceby,Scratby (Sands)...run out of inspiration now, must have been away too long, or the brain has been fuddled by the lunch time 'vin rouge'
Normal service will be resumed as soon as possible (lol)

Oh how I love the English countryside. I long to be there again.

Re: "forget about coming back"... though it may seem so (since I've been over here three decades now) it's always in the back of my mind. England has a strong pull on both my mind and emotions. Keep hoping I'll strike it rich and then I can live 6 months in UK and the other 6 months in the US! Wouldn't that be nice? :-)