To say that it has been wet here is a bit of an understatement.   Yesterday we had an inch of rain and although it was lovely and sunny first thing this morning we have already had one heavy downpour and it looks a bit stormy again.   'Abigail' is due to hit us later tonight, although it is going to be worse further North.

The farmer took my camera with him on his morning walk with Tess and took these photographs of fungi growing under the trees.  Just the time of year for them: 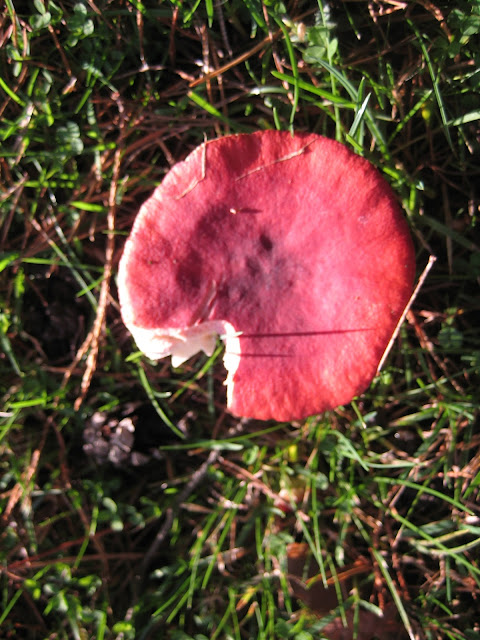 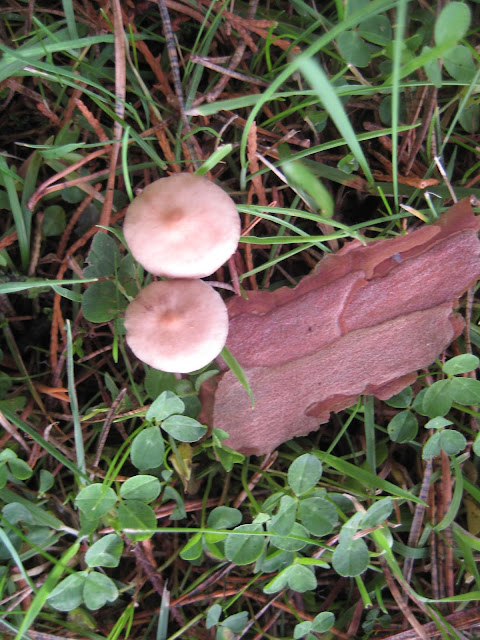 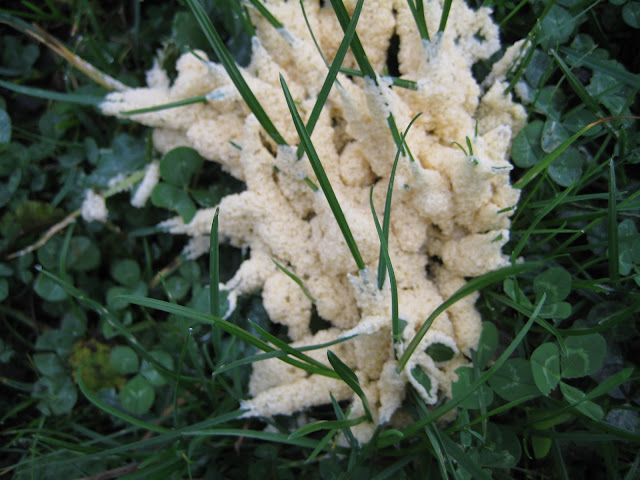 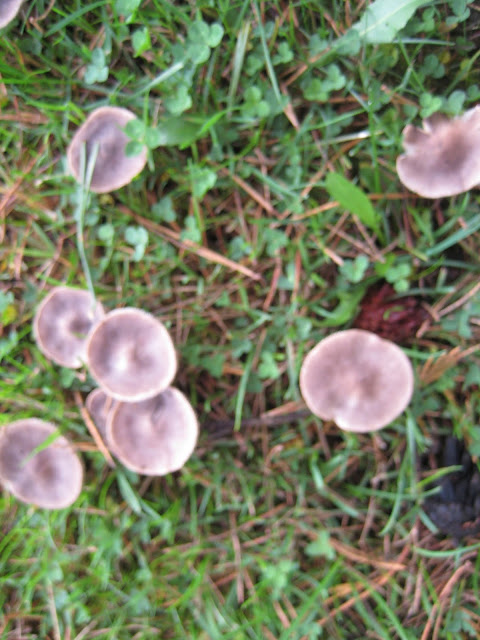 I think that the third one isn't a fungus, but more likely to be insect activity, like 'Cuckoo Spit'.

Cuckoo spit? Looks more like the cuckoo threw up.

Or worse. Let's not forget where we are...

Hope you weather the storm OK.
Fungus pretty but a bit dicey to eat - I think!

A good selection of fungus. We get clumps of the very tiny ones and ink caps in our garden much to my husband's annoyance but I don't think they do any harm.

I have heard the red ones are very poisonous and the white stuff looks like an enormous amount of reptilian spermaceti. That storm sounds bad. I've seen pictures of swells in the north Atlantic sweeping over lighthouses that haunt me. I'm a landlubber as you can tell.

Uh-oh, someone took a bite of the red one, aren't they poisonous? We're have a drizzle here, other parts of Georgia are getting soaked. Hope it cools us down.

We get the odd mushroom growing in our lawn in certain places. I have never seen anything like the third photograph. Don't even know if it grows here. -Jenn

Mummy and Me said...

Some pretty fungus, lovely colours. The cream one is so unusual I've never seen anything like that x

re Heather: My neighbour had a thousand Ink Caps growing on his lawn, and he just mowed them. Idiot, they're delicious.

That third one is certainly very odd, although the farmer assures me we get it every year. He likened it to dog-sick. But Tom and Rachel - yes I hope I am broad minded so liken it to whatever you like - the more descriptive the better.

I hope the storm will miss you and no flooding up North.

On my tv weather map there's no sign of Britain. Just a big white blob like one of your fungi.

The first one is probably Russula emetica and although it does make humans vomit as advertised, it is not deadly. Lots of animals eat it with no apparent harm. The third one is probably a white slime mold. Google slime mold and see what you think. Nice shots!

Weaver, I learned lots from the photos and text of your post, and the prior comments, too.

How I do enjoy visiting here. xo

What interesting growth. Is any of it edible? We seldom see these fungi, being in a semi desert area, but every once in a while if there are more than two days of rain in a row they will sprout up.

Great photos, thanks for sharing, we are being hit with high wind and torrential rain at the moment and it looks like its here for most of the week :-)

Wilma has a possible answer to that third picture, so thanks for that Wilma.

Gwil's reply is more scary - is he suggesting that fungus is gradually eating away our country??

Pat, have a look at the blog above, it might give you some ideas re. fungi

Ours are all dead here...frozen solid. Gone for the year.

I seem to have missed your request for id., but the 'massy' specimen in photo 3 is a Slime Mould - one of the Myxomycetes. These were previously allocated to fungi, but are now considered to be closer to animals, since some have the ability to move. The red one is almost certainly a Russula, but taking it to species isn't possible from the image: we need to perform various tests on cuticle peeling, stipe colour, smell, taste and maybe microscopy of the spores.