The Vagaries of Farming.

Such is the nature of farming that what yesterday was intended to be turned into sweet smelling,  crisp hay is now wrapped in netting and on its way to becoming silage (or pickled grass).

Today our extremely hot (for this part of the world) weather has turned humid and black clouds are massing on the horizon.   It is possible that thunderstorms may reach us by this evening.   The humidity level has meant that the crispness has gone out of the cut grass and it has become limp.


The farmer has cut his losses and  asked farmer friend and neighbour G to pop over and bale it up, which he has done, and wrap it in net.   It now needs wrapping in plastic so the farmer has to find a contractor to do this at short notice - not usually an easy task.   But even wrapped in net as it is now at least it has some protection should we get a thunderstorm and torrential rain.   The forecasters say some will get it, others may miss it.

The storm has gone all around us - flashes of lightning and cracks of thunder - but so far no rain.   The bale-wrapping man has just arrived, so all will be done even if we do get a storm.

Out to lunch (wraps and salad) with friend S - delicious and lovely couple of hours of conversation.   We went to Tennants, our local, very grand Auction House, met friends and had nice chats.   Now home.  The farmer is leading in his wrapped bales, Tess is itching to get on her afternoon walk, I don't feel in the least like eating tea after a rather large lunch. 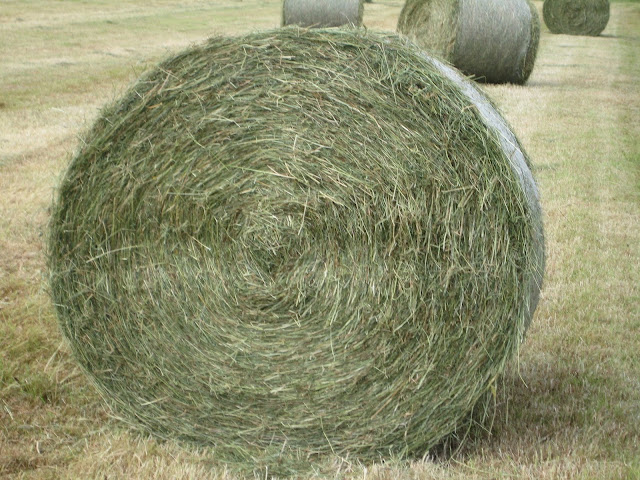 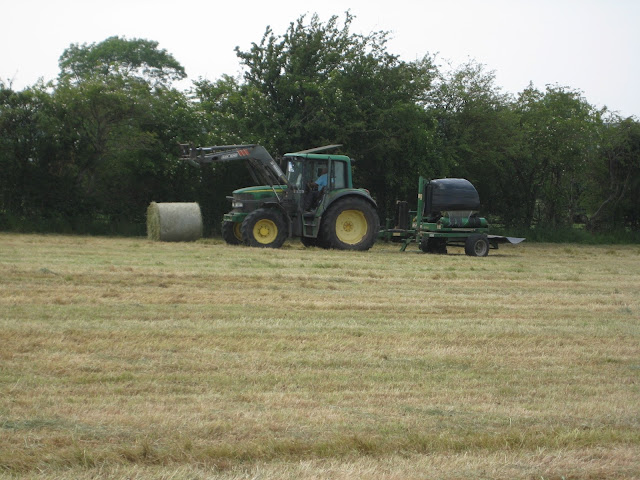 Hay I understand and siliage (you explained it to me) I still don't understand.
But the fact it is more nutritious than hay (but made from hay) and the cows like it
is all that is important.
Plus the Farmer saved the crop !
Nice photos today.

I wish we would get a storm…it is 30c in the house today……one small fan not making a lot of difference. Even the dog forgot to ask for his dinner!

So it is Wraps all round for the grass and your lunch Pat !

There's something nice about seeing the bales out in the field drying out, they must smell lovely in the warm sun...
Amanda xx

Good farming has a plan B, but it's all so much work.

It is so hot here in Portland as well. We normally can expect rain at this time of year but have not had any for the entire month of June and it is now July. We are having central air added to the house tomorrow so at least we can sleep comfortable at night, I will miss opening up all the windows.

At least it is all safely wrapped and the farmer needn't worry if you have a storm tonight or it rains tomorrow.

It's always a hard thing to get hay just right. At least wrapped you still have it.

It looks go though.

Here they wrap them in long single lines; and unfortunately in WHITE. But it seems to be a very good system, the silage always smells very sweet.

At least it wasn't rained on before it was baled. I had to smile at you going to Tennants for a "good meal". When we go to auction, what is on offer (if there is a sit down place as an alternative to the burger van outside) could not be called Haut Cuisine by any means! At Brecon we can have cakes from Greggs (I see the bags), and a choice of bacon or sausage sarnies or chips. The chips aren't bad though . . . In our "posh" auction, it is sandwiches or choccy bars . . .

Very opportune silaging. By seven oclock the storm reached us - it had been skirting round for hours. We had only a short, sharp burst of rain and one flash of lighning. My son, who lives about half a mile away over the fields, had an absolute downpour with lumps of ice falling from the sky - they were so large he was afraid they would damage his car.