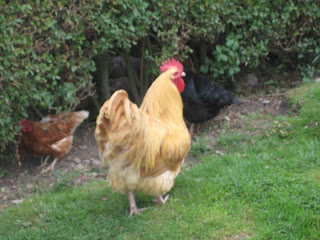 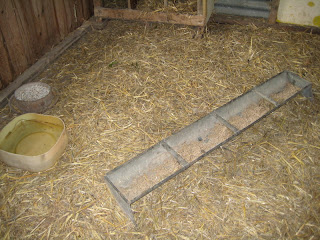 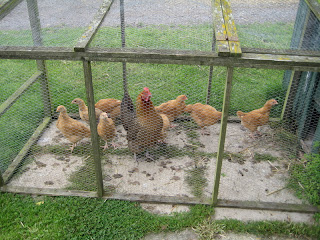 Well it all went well. Just as dusk began to fall we made sure that the cockerel and his hens were in the other side of the hen house and that the connecting door was shut. Then we went to the chick's house in the vegetable garden. They were all snuggled under their mum for the night. Tess thought it was great fun!

The farmer got mum out first and boy, did she make a fuss as he carried her round to the new home. After that it was easy to get the chicks and between us we carried them round. By this time the whole of the hen house was making such a noise - particularly the cockerel.

It was interesting seeing the chicks upside down and close up (the easiest way to carry them is by their feet). Their feathers are such a beautiful golden colour - exactly like their Dad. This morning they are already out in the run. Sadly the run is on concrete so they will not have the advantage of scratching in the grass now until we let them out as free range. There seem to be three cockerels and five hens, which is a good percentage. We won't let them out until they are bigger because we do have a resident buzzard and he might find them too tempting. Later in the day (I am still in my dressing gown) I'll hopefully take a photograph of them to post.

Before I go I must just tell you about the most delicious salad I made for tea last night. Salad and the farmer are never to be seen in the same sentence, so I have to try hard to tempt him to eat it. I chopped up little gem lettuce, spring onions, discovery apples, tomatoes, two hard-boiled eggs and a few herbs. Then I melted St Agur spreadable blue cheese gently in a saucepan until it melted and poured it over the salad as a dressing, tossing it in. Delicious. Do try it.

2pm. Here are the photographs I promised. One shows their much bigger living space - the other hut was getting far too cramped for them. The window lifts out and has gauze across it, so they have plenty of fresh air too. Another shows the proud father - they are so like him (well, most of them). There seem to be only three cockerels as I said so the five hens will be kept as this year's new laying hens . As to the cockerels we shall offer them to anyone who wants one - free of charge. If there are no takers then sadly they will be fattened for eating in the winter.
Posted by The Weaver of Grass at 01:17

I'm looking forward to the chick photo and I really might try that salad. I never think to put melted cheese over one. Great idea!

I covered the reluctant salad eater in one of my orther blogs!

young hens yellow legs
I always think that look as though they are wearing stockings!

Love most salads and try to eat one daily - Caesar is my favorite - I always make my own croutons and grate fresh Parmigiana Reggiano, but I do use a bottled dressing called Cardini which is very good. Your salad sounds awesome, and as I always have cheese-aholic cravings, I'll give it a try soon!

Anxious to get a view of those little babies - will you keep them all Pat?

Happy day in The Dales, wish I was there where it's cooler - 100+ degrees again today here but I'll be leaving for a cooler place on Sat.morning - yippee!
Mary X

Well done with the move. We have four new girls in our hen house and any day it will be time to put a few dummy eggs in the laying boxes. One of the older hens insists on laying in the field/under the trees and we can never tell when the eggs were laid - terrible waste!

The chicks have grown so much. They are so big.
Thank You, so much for the story and photos.

Such a beautiful color. Summer corn (wheat) comes to mind.

Your cockerel is such a handsome chap, and how the chicks have grown! I'm sure they'll enjoy the extra space until they can be let out to roam.
St.Agur spreadable is so useful for perking dishes up, but I have not tried it as a salad dressing. It sounds delicious and thankyou for the tip - I will certainly try it myself.

Your salad sounds delicious - my father the farmer is also a bit suspicious about salad - and pasta, too!

The chicks are so interested in the other hens now that they are out of the garden and can see them all the time. It will be lovely when they can be let out but I do anticipate a bit of fighting until the pecking order is established - they are already doing a bit through the wire.

Thank you for the comments.

Wonderful stuff! We have a brrody hen right now.

Thanks for the pics.

Not sure what I did wrong, but the previous comment was for the previous post!
Fascinating post, this one. Harvest and harvest festivals are as resonant with memories for me as Christmas - well, almost!
I think the most memorable I came upon was cycling through a Cornish fishing village as a lad. There was a HF entirely composed of fish. (Or was it memorable because they wouldn't let me in to the service wearing shorts?)