Out of his comfort zone. 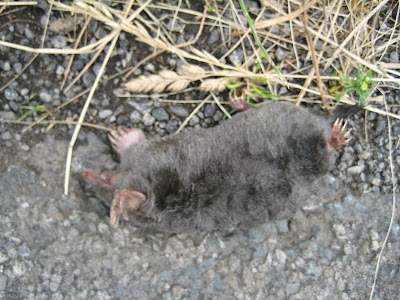 (For the last time.)

I found this little chap on the side of the lane, feet up. Moles usually spend most of their lives under the ground, searching for beetles, worms and grubs of any kind, which they chomp up voraciously. Their feet are definitely made for burrowing, their snouts are made for sniffing out food and their eyesight - because they live mostly in the dark - is very poor indeed.

I read that they cannot go more than two or three hours without food and also that their 'fur' is not slanted in either direction, so that they can go forwards or backwards with similar ease.

They are the bane of the farmer's life as they push up mole hills in the fields so that they get a breath of fresh air. If these soil hills get into the silage they do it no good whatsoever and of course they also destroy the grass. In the old days gamekeepers used to trap and kill them and string them up on wire - such a barbaric practice I thought.

I stroked its skin and it really is the most velvety soft skin. I wonder whether it was ever used for making anything - does anyone know? You would certainly need an awful lot of moleskins to make a moleskin waistcoat.

I couldn't help but feel sad that he had died in such an undignified way - probably knocked by a vehicle as he crossed the lane I suppose.
Posted by The Weaver of Grass at 07:02

I do feel sorry for moles. In themselves, they are such harmless creatures and aerate the soil with their burrowing . . . it is just their air vents which are troublesome to humans who think thy own the land. For my money, it is the creatures who have occupancy rights and humans are just recent newcomers who think they can lord it over all of creation.

I agree with Arija that moles have first rights and that humans think that they are entitled to rule nature. But mole hills are spoiling our small front gardens.It's a pity that they have to be chased away.
Have a nice week!

We don't have moles here, so the only ones I know are from storybooks.
Sad little creature.

There used to be moleskin gloves, because their skins were durable yet soft. But I don't know when they were no longer made.

Interesting how finding something that usually we view with distaste can make us rethink when found in a vulnerable state. I once ran over a snake in my car - much to my delight as I hate snakes. Then when I watched in rearview mirror how the poor thing folded up into a protective huddle while prepared to die, I suddenly didn't feel so delighted.

Do I like snakes now? No. But I do have a softening to know they have one also.

What a sweet little fellow. It is always sad when one find a dead animal by the road. I too wonder how he died.
I have always loved the way Moles look. I think they are very charming.
Hey, I love the Javelinas who I share the land where I live and they are not to everyone's liking but I think they are wonderful.

Oh, these guys have given my yards in the past some grief. You'd have to laugh at me at all the things I would do to drive them away.

We had a brain-damaged stoat in our garden today - probably hit by a car. He/she spent half an hour lying immobile on the patio, then jumping up and careering all around from left to right. Finally retreating into a crevice between two walls - I think to die. Perhaps I should have put the poor thing out its misery earlier. But I could not do it, despite being a country child.

I am a mole and
I live in a hole

Sorry. Couldn't resist.
Tim Bullen who lived in a cottage down the way from us had lots of moleskins nailed up in his barn.
The fur was soft and lovely and the skin all hard and almost crinkly.

I always thought molehills most attractive --and what super potting soil.
Dad used to get quite apocaypticl (spelling) with fury when he looked out of his bedroom window at the lawn.....

Mole was the mosy sympathetic character in THe Wind in the Willows.

I certainly wouldn't want molehills all over my garden and have seen literally hundreds in a field on the way to Monmouth. On a visit to Slimbridge once, I noticed a plant moving beside the path and stopped to watch. A little pink snout appeared, twitched a bit as it sensed my presence, then disappeared below ground again. That's the nearest I have been to seeing a mole. I remember a character called Moldey Warp from a lovely childhood book, and of course there is Mole and his friends in Wind in the Willows. Inspite of their damaging habits they are endearing little creatures.

You are a sympathetic lot aren't you - I suppose that is why we all get on so well - because we all have similar feelings. Sad about Robert's stoat isn't it? Also I do agree to a large extent with Arija. Interestingly they say in some parts of the country, molehilss turn up Roman coins etc. And, of course, the soil makes good potting soil so it is not all bad news.

i just came in from a ride 'round the countryside and wondered at the carnage - raccoons, turtles, birds, frogs, a cat. all hit by vehicles and left. life comes and goes. steven

My sister-in-law calls her husband Moley because he has black hair and is so short sighted he screws his eyes up when you nick his specs, so I have quite a soft spot for moles. And it's always sad to see a creature who's had its life cut short. Poor thing.

I do sympathise with farmers, though, who have to earn a crust from working the land.

Poor mole. We have them regularly, in the garden and in the fields. Yes, they make a mess, but they have as much right to be here as we do. It is still a thrill to see one. Beautiful, comical little things with those amazing digging feet.

A single moleskin was used by plumbers (the old ones who knew what they were doing) to 'sweat' lead joints in down-pipes, etc.

You know those fat, oval-ish shaped joints in 2 inch lead piping below your old sink? Well, a blow-torch would be applied to the whole thing until it 'sweated' and produced little droplets of molten lead on the surface, then a moleskin would be quickly wrapped around and moved to smooth it.

Then there was the toast to "The little gentleman in the moleskin coat" - which was Regicide.

the last mole I saw, the male pig no 12 was happily chewing on him!

Moles - agree re the lawn but still feel sad. xx

My brother was plagued with moles in his garden some time back. Apparently they are protected. He wasn't allowed to do anything to stop them burrowing into his land from elsewhere.

Poor little guy. We did have quite a horrible mole infestation a few years ago. They made the lawn at WM look like a mine field. They can be rather pesky in that regard.

Thank you for the response. Interesting what Tom has to say isn't it? I suspect in times gone by there were all kinds of uses for moleskins. I too have very mixed feelings about them.