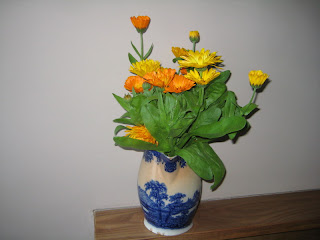 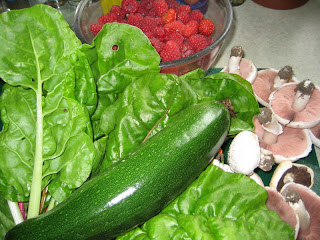 Because the weather seems to be set fair for a few days the farmer has started his sub-contract haymaking in earnest. Today has been cloudy but there is a slight breeze and it has been warm. These are not ideal conditions - it is better if the sun is out because then the hay does not become soft. It needs to remain sharp and rather brittle to be really good hay. This evening the sun is fully out and there is not a cloud in the sky, so it should be drying nicely (fingers crossed.)

I spent most of the morning in the vegetable garden. First of all there was a hen blackbird trapped in the raspberry netting but I managed to get her out unharmed. It is always sad if we find one too late but there would be no raspberries for us unless we covered them because blackbirds find them quite irresistible.

Then I picked the daily bunch of sweet peas. This year there is no white one and the colours tend to be pink, lilac and magenta. They need picking every day so that they don't go to seed and stop flowering. Also picked my first big bunch of marigolds (calendula) - they are one of my favourite flowers and look so pretty in my old blue jug.

Then it was time to gather in the veggies for today's lunch. The peas, runner beans and broad beans are so nearly ready - but just not quite. So instead we had courgettes and Swiss chard - plus a good early helping of field mushrooms from the pastures, and raspberries for pud. It looks as though this year is going to produce a good crop. Their taste bears no relation to the ones we buy in the supermarket.

There is something so satisfying about eating one's own produce - makes all the hard work and the weeding worth while.

After the farmer came back from doing the hay we cleaned out the hen house together because tonight is the big night. The chicks, who are now six weeks old, are being transferred into one of the 'rooms' in the hen house, to give them a bit more space. We shall transfer them after dark when they have quietly settled down, otherwise there will be such a furore. I'll post a photo of them in their new abode tomorrow.
Posted by The Weaver of Grass at 10:29

Do hope the weather holds for David and the other farmers. Your marigolds look so pretty in that blue jug and I can almost smell their lovely spicey scent, and the sight of your homegrown vegs makes my mouth water.
I remember mushrooming with my Mother as a child and picking so many one year that we went round all the neighbours to see if they would like some.
A big day for the chicks!

I can't wait to see the new photos of the chicks.
The veggies and berries you picked for lunch look wonderful.

There's nothing like home grown vegetables and berries. The tastes are superb. Let us know how the chicks did on their big moving day. I can't wait to see them in their new space.

What a pretty bouquet in the old jug.
When you finish your hen house I could use a hand over here - it's getting ahead of me and I forsee a very dirty hour or so out there on my own.

You bless us with this connection to nature. Eager to see the photos.

Mmm! Lunch sounds good. I can't wait to see the chicks in their own space. I love how you explain the exact needs for the chores. Never knew that about hay

I love calendulas, they bring back wonderful memories of my childhood - ours went into a lovely green jug which my sister now owns. Field mushrooms are so much tastier than the produce we buy in the shops. The best ones near us always grew in patches of galvanised burr - an extremely prickly week, so you had to be very determined if you really wanted the mushrooms! Cheers

Glad the hay is cut and the weather is holding.
I fully concur with the flavour and look of home grown produce. Here we also have to net our raspberries and other berries.
Great that you got the chicks transferred as well.

The veggies and raspberries (my most favorite fruit ever) look fabulous. I recall early morning mushroom picking forays with my mum as a child - had to get out there before the cows trampled them! Nothing tastes that good when you saute them for breakfast that same morning!

Hoping that you have a good hay-making this year! Some of our local farmers are out cutting this week.