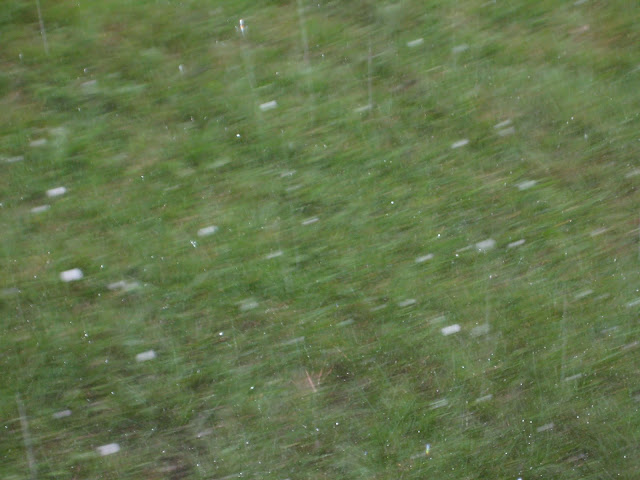 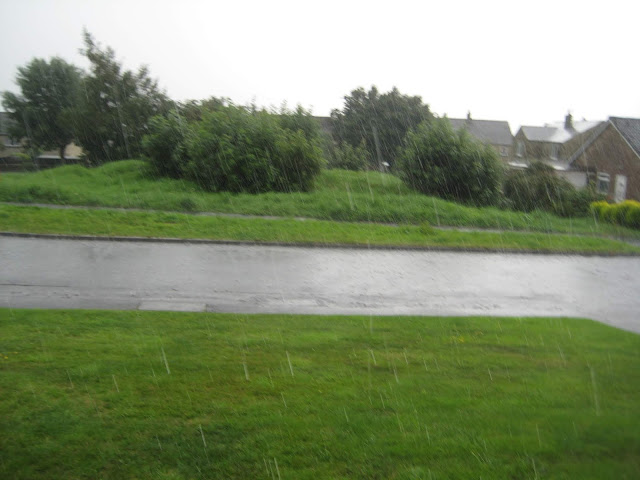 As I write this at three in the afternoon we are in the midst of one of the worst storms I have ever seen.    Hail stones are cascading down, my whole garden is flooded and there is water everywhere.   It has been going for a good half hour and as yet shows no sign of abating.   Tess and I were just about to set out on our afternoon walk when it arrived -  we shall not go now until it is long past.   It has just come on twice as bad.   My poor plants - they certainly will not be thirsty now.  And my water butt will be full.  (and my windows washed clean). 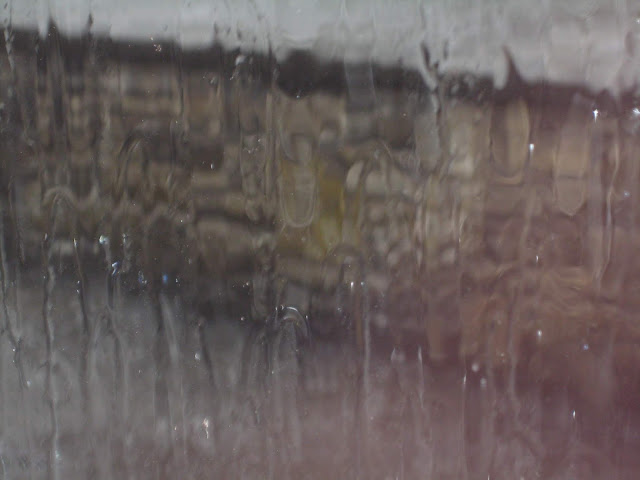 There is literally a waterfall coming through at the top of the garden, cascading over the top patio and then pouring over the bottom patio and going I know not where.   When it finally stops I might go out and see!The sky keeps lightening and the rain lessening and then a couple of minutes later it starts again.   Our climate these days is never a happy medium - always one thing or the other.  As I write more hailstones have arrived.

Water is shooting up through the manholes in the road outside.   The sky is lightening, odd scraps of blue here and there.   The standing water is slowly dispersing but not sure where it is going - certainly not going out to look as it would be well over my shoes.

Yes, stay in until the lightning stops at least! Sounds like the type of electrical storms we get here in the southeast (US) on late afternoons in summer. Flooding rain and sometimes hail when the temps. drop so suddenly - all very dangerous and best to stay inside and definitely not drive. Hope all calms soon and your garden is not damaged - or your house flooded!

Goodness, what a deluge, just as well you were not out walking with Tess when the skies opened.
It's hard to strike a happy medium with weather in your part of the world of late.
Alphie

Well that's ok. No watering to worry about.

Glad you were not out when it arrived. I went out for lunch today and arrived home at about 2.30. Opened my windows for some fresh air, made a cuppa and then had a snooze. I woke about half an hour ago to torrential rain and scurried round to close the windows. It had been showery all day but not so bad. No hail though. Hope your garden has not suffered any damage. We don't know what is coming next, do we?

That looks pretty scary Pat.
Combining the wheat and barley goes on untroubled here today.
Could do with some of that rain though. All we have is bone dry conditions and a gusty, to 50mph, wind. The bit of rain we had on Saturday has long been sucked out of the ground by the wind and sun.

We've had on/off heavy showers here in West Wales - I think they are making their way north, and it all depends on whether one just happens to be right over you or not. Very 'spot location' rain (if that's a term). It'll all run away soon. That's the beauty of living in a hilly area! Keep dry!!

Hope no damage done. I would welcome a storm, but perhaps not the one you have. Still hot and humid here.

Sounds very much like an Italian storm, especially the hail. I hope everything bounces back, you and the sun included,

Good grief. That looks very violent. I hope that the hail hasn't damaged your poor plants, or anything else for that matter.

This sounds awful that much rain in such a short time always brings problems. at least here in Tucson.
parsnip

No rain here in Yarm,probably only thirty miles away as the crow flies,just hot and humid. Sorry if my spaces and punctuation not up to Eton and Oxford rules :)

Really bad hailstorms are nothing to joke about. I lived through one where the hail bombs were as big as tomatoes. It didn't even seem like hail but like an attack from outer space. Anyone interested in the pictures of this storm could google 'Hail Cheyenne Mountain Zoo'. It was something else, I tell'ya!

At 77 years, K and I count each sunrise as a gift, and hold it as a candle of tomorrow.
__ On Cape Cod, we've faced a different sort of "Climate Combat", one that had warred into such severe damages to so many of our townships. In these worldly and negative climatic regressions, K and I have concerns about our's and everyone's Grandchildren to come. Too, to those plausible Great Grandchildren that may some day be generated. _m

The storm lasted for three hours with several periods of hail and the rest of the time torrential rain. The roads in our little town were flooded and traffic at a standstill.
Several houses round where I live were pumped out by the fire engine which has been busy all afternoon. The lane where my son lives has been washed away and the houses either side of him are completely flooded but luckily his house stands further back from the beck so although the garden was under water it has only flooded the utility room. His village was also cut off by flood water.

No watering for a few days then.

That was some storm you had! Your poor son and his neighbours too! I hope that, tomorrow, the weather in your neck of the woods is a lot better for everyone concerned :)

Just saw Leyburn on the BBC News at 10 and thought of you. What a storm! So glad you and your son and his family are OK.

Looks like your town took the main thrust of it Weave.

That sounds serious! We had some rain, but nothing much. I hope your water found somewhere to go.

Hard to believe that a waterfall cascading down your garden from top to bottom hasn't washed away soil and plants from the flower borders. Your description of the damage locally, in the comments above, really brought home how bad it had been.

What a terrible storm for everyone in Leyburn, I see a small bridge collapsed over a beck as well. When the floodwaters come down from the moors it brings so much water. Stay in and stay safe, hopefully electricity and water are working alright.

When I did the ironing last night and was listening to BBC Radio York (as is my habit), they were talking about Leyburn and the thunderstorms and flooding. One lady, a shop owner, called in and described how she and her staff had been doing their best to stop the water entering their shop. Of course I was thinking of you and am glad to know you are ok and you and your son's houses are not flooded.

BBC's News Page has details and videos this morning. It looks like some damage to bridges will take a long time to repair.

Thanks. My son and his wife have difficulty getting to their house as the bridge has collapsed - this makes it difficult for about a dozen houses on the lane - it has happened once before but at least it didn't get into their house although it got into half a dozen others. They stayed B and B in Leyburn last night - hopefully I will see them today. Apparently there was a month's rain fell in an hour.

My ears pricked up when I heard your town mentioned, Pat.
Stay dry indoors! xx

Glad your house and your sons house escaped being flooded . It looked very frightening on the news this morning. I hope it doesn't rain there today.The storms are very localised and difficult to predict where they will strike.

I saw the result of all this on the news this morning. Gosh, many people must have been affected by this. I hope that you are able to get out and about when you need to - the bridges destroyed etc looked to be more rural. Tennants put a goodwill post up on Facebook (really saying their sale is still on - hope you can get there!!)

We don't do weather by halves in this country, do we?!

Oh my goodness!
I am just seeing this. So glad that you are safe. Hoping repairs to your son's lane won't be long.
It certainly seems that the weather has been far more violent than in the past.
Yesterday, we had an intense thunderstorm with the largest hail I have ever seen. Although nothing compared to the devastation you describe. Oh, those poor farmers!