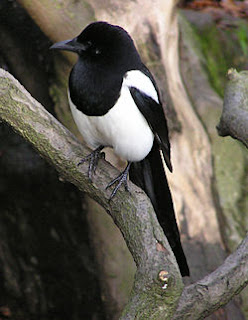 The saga of the pheasant's nest by the front door continues - but not for long I'm afraid.   The farmer and I looked on Saturday and there were twenty-four eggs in the nest, and still going up by two each day.

Yesterday morning, on my way upstairs, I stopped to look out of the landing window and as I did so a magpie flew off from just under the window; in other words where the nest was.    I went to the front door and looked round the corner to see that half of the eggs had disappeared.   By yesterday evening there were only six left and this morning the nest is totally empty.   So I am afraid that any attempt to raise a clutch of young, be it by one hen pheasant or two, had been thwarted.

Well that is nature isn't it?  I must say I have always liked magpies so I can't be too distressed.   In any case the number of eggs in the nest meant that sitting on them would have been a disaster, so maybe it is for the best that they have gone to feed Mrs Magpie's babies (hopefully she has had more sense and laid just enough to sit on).
Posted by The Weaver of Grass at 01:39

I'm not too keen on magpies and their harsh cackling. I always chase them out of the garden when I see them, they like to target the blackbird nests in my hedge.

Such a shame, I dont much like Magpies never had, seen them tear open nest boxes and kill all the young, I do like Pheasants delightful birds perhaps she will re-lay another clutch somewhere a bit safer :-)

That's nature at work Pat as you say where one creature feeds off another. Come to that human beings are very similar we live off nature too.

Corvids of any type should never be allowed near gardens, they decimate nesting birds, they took all my Robin young last year from the nest box. It's easy to understand why gamekeepers and nature reserves trap and cull them, I certainly do in my garden. Sorry to be so direct but they really do wind me up.

Generally, I like Magpies - I think they have a good sense of humour. They do test me when they rip apart a Long-Tailed Tit's nest to get at the chicks though. This time of year, it's all sex and violence out there.

Magpies have just the same right to live than all the other birds, we should not like them more for their beauty and intelligence, or dislike them for their lack of song and harsh cackling or their feeding habits. After all, it's their instinct that tells them to go and kill other species' baby birds, or eat their eggs - not because they are mean and brutal in character.
That - meanness and killing for sheer pleasure - is a "privilege" reserved to humans...!
Still, I am sorry for the way the pheasant family planning did not work out.

Nature at work can make you wonder sometimes what the lesson to be learned could possibly be. It certainly doesn't seem to be 'live and let live'!

They are so smart, beautiful birds too. Nature being rather harsh again.

Apparently our Australian magpies are not related to yours, and they warble most melodiously. It is wonderful to wake to the sound.
They wander up and down the grass verges and only a rare one swoops people during the nesting season. I think I read of research showing they 'hold grudges' and also attack men more.

Dear Weaver, do you think that your pheasants will remember this theft and build their nest elsewhere next year?

I do wish that things had progressed better this spring.

P is having a quilt made by the local quilters, which he designed, with magpies on it.

Nature can be harsh but that is the nature of nature, survival of the fittest. When I lived in England I had a pet magpie that followed me like a pet dog, even flew after the bus that would take me to school.

Poor Mrs. Pheasant(s) Magpies are such handsome birds but have few scruples.

So Interesting. I first though she was laying her eggs in the nest for someone else to raise.
What a beautiful bird.

I'm not a fan of magpies. We have plenty round here in Yorkshire but we never really saw them in Scotland where we had the same situation there with a pheasants nest. I've no idea what took the eggs from that one. I wonder if pheasants get used to these horrible raids.

You have to admire magpies for their tenacity, their ability to thrive almost anywhere. Can't help feeling sad for your pheasants though.

Whereas pheasants would be in the special needs class at Bird School, magpies would be high achievers - probably going on to university. Very clever and resourceful birds in their Newcastle United shirts.

I'm loving this good common or garden sense Pat.....that's nature...love our magpies and crows...yes and even the wood pigeons when they lull me to a snooze down in the summerhouse...just keep off the broad bean plant let's please!

When we drive out of the house the first magpie is always greeted with 'Bonjour M.Pie'. I think it's to placate what is thought of here as a somewhat malevolent or unlucky bird.

I can fully understand the comments of the people here, who in the main whose involvement with Magpies is simply seeing a pretty bird flying around in the countryside, but you have to understand that it goes deeper than that. Take the Lapwing, this ground nesting bird of the open fields and marshes is now classified as a Red Data species, i.e. the decline in it's numbers has been constant and immense. On the reserve that I operate on we currently have just 25 breeding pairs and daily plundering of their eggs and chicks by Crows and Magpies can easily wipe out that breeding season for another year. That is why controls of a very common pest has to take place. Saying that Magpies are nice, pretty birds that shouldn't be touched is a bit like me telling The Weaver that lambs shouldn't have elastic bands put on their tails to make them drop off.

It's OK to see a solitary magpie so long as you say: "Aye, aye, Captain." It cancels out "One for sorrow."
As we all known two magpies means "joy". Three means a "girl" and four means a "boy."

Magpies have their place in nature and are beautiful birds, but too many can cause havoc for nesting birds.
I hope Mrs Pheasant has enough sense to make a new nest in a safer place!

Thanks to everyone. I think we should all listne to Derek's informed opinion on
magpies as he does have a point. On the other hand it always has been the survival of the fittest (and the cleverest) - nothing changes. Thanks for calling in.