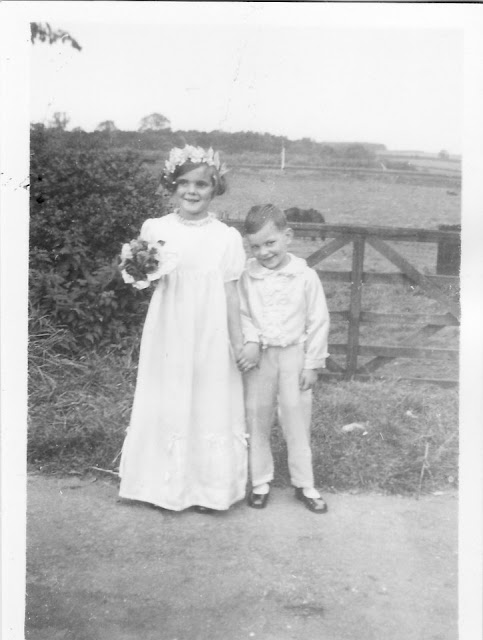 Two totally different memories today, one of which I intended to put with a photograph, but - sorry - windows 10 is still only new to me and I just can't find it now that I have scanned it into my computer.  Managed to do it four hours later.  I'm learning!

So memories without a photograph.    It is seventy five years today since I was bridesmaid for my brother on his wedding day - January 24th 1941.   He was, of course, just about to go off to fight - in fact he was married in his uniform.   But I don't remember any poignancy to the occasion - it was just one jolly, happy day as far as I was concerned.   Weren't parents good at keeping the trauma and terrible worry of war away from us children?  My brother survived Dunkirk and the war and he and my sister- in- law lived happily together until he died in 1985.   My sister-in-law is still alive and, at the age of 95, lives in a Nursing Home.   Sadly, I suppose, she will not remember what day it is today - but she is happy and contented in her own way and that is all that matters.  So sorry John (Going Gently) but can't post that childhood photo you requested.

My other memory was triggered by reading that a new biopic by the BBC entitled 'Stan and Ollie' is to be made.   As kids we used to think Laurel and Hardy Films were the last word and we absolutely adored them.   Then in 1953 I went to see them on stage in Nottingham as they toured the Musical Halls, trying to revive their image.  As Kevin Maher says in yesterday's Times - Hardy was already ill, they kept falling in and out, and they toured, trying to recapture some of their earlier 'hysterical, heyday magic',   But it was too late - times, and the sort of comedy that attracted the masses - had moved on.   I remember the evening as one with a half-filled theatre and a very poor, lack-lustre performance.   I shalln't go and see the film.   That era has long passed and can't be revived in my opinion.

I look back on a very happy childhood despite living only 30 miles from London during the war years. I was never allowed to see a newspaper and I think the news was listened to after I had gone to bed. My father was over-age when he joined up so mercifully wasn't sent abroad, but even so he had quite a dangerous and busy time based mostly on the Thames Estuary. It put him off fireworks for life!
It's a blessing your sister-in-law is happy - one of my aunts became similarly afflicted.

Strange that a Laurel and Hardy biopic hasn't been done before. I hope if they do it, it isn't terrible.

I loved reading this! Thank you for sharing.

My father told me a wartime story in the spirit of your wedding party story. My mother's younger brother was shipping out the next day and called my mother in Ohio, collect, from Ft. Benning, Georgia. After half an hour my dad looked at his watch, wondered how he could ever pay the collect charge, then thought that my uncle might not return and said nothing. The call lasted more than an hour. No charge ever appeared on the phone bill.

I was born during the war, so have memories of it at all. Of course I've heard, and read a great deal about it since then, and enjoy books set in that era.
Not sure about Laurel and Hardy, as I can't recall ever going to the cinema to see any of their films. I know my parents were not fans, so maybe that's why. Sometimes these things are best left as a happy memory, rather than trying to re-create them for a different generation.

I should have said no memories of it at all !

Such a sweet photo, Pat. The smiles say so much about the innocence of the young and the photo is especially poignant given that it was taken in war time.

Lovely photo; I can see your face there Weave, and with flowers in your hair.

You were a beautiful child, and If it weren't for the black and white caption I would think it's a modern day photo - a flower girl and page boy at a wedding. Geetings Maria x

I love that photo Pat. Do you still feel like that girl sometimes? I used to watch Laurel and Hardy all the time. That and Our Gang - just loved them.

Dear Weaver, I find that photograph of you as a very young bridesmaid very beautiful. It does speak of an atmosphere from an earlier time that I very much wish were more with us today. The atmosphere is what I wish for.

May I also tell you of how I was interested in your previous post about various house prices, and also in the information included in the comments. I think that what is going on here in New York is way beyond reality that anyone would choose. Part of my interest in reading blogs from around the world is to gain insights into where might be a place I would also be happy to call home.

Even as a newcomer to an area that values residents with locally based prior generations of relative.

I love the new profile pic...we went to Dunham Massey today and the snowdrops are beautiful....Spring just around a corner...hopefully.

Thank you for sharing that picture. So sweet and innocent. -Jenn

My favourite L & H film was the Christmas tree salesman. They started a tit for tat argument which finished with the whole house being demolished (or am I just imagining it).

Love your photo. I am so glad your brother survived the war, and that his widow is happy in her nursing home.
We were avid Laurel and Hardy fans here in Australia too - Saturday afternoon matinees - Charlie Chaplin and Lassie films had to compete with them for best favourites!

Forgot to say how much I like your new header, full of sunshine and joy.

Such a precious photo of you as a bridesmaid. There is still a likeness.

Thanks. That phrase 'there is still a likeness' - have searched but can't find it myself! Thanks for seeing it though - cheers me up somewhat.

Apropos films:
Just receive a film tip from a discerning friend.
'Youth' starring Michael Caine.
I will definitely go to see it.

That is a beautifully sweet photo; glad you figured out how to post it. And as Heather said there is still a likeness.

Thanks everyone for callingin. I shall also note Gwil's film recommendation.

You are a very cute little girl. I haven't got the courage to switch to 10 yet.

Knew immediately that was you! Still look the same.
As for Laurel and Hardy, I keep a photo of them on my desk. They are being pulled over by the police, Hardy looking angry and Laurel looking befuddled. It reminds me of my husband and myself. xx

Great photo, and yes, you are instantly recognisable. Amazing that you saw Laurel and Hardy. Wow!