.Caught in the trap 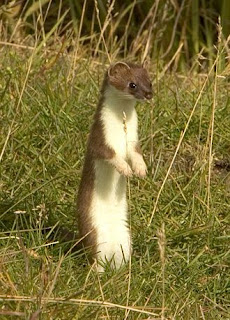 Every farm has rats to a greater or lesser extent.   We are never ratless the farmer assures me, although I have never actually seen one, thank goodness.

The number of rats increases as the weather gets colder.   In the summer there is plenty of food and in the autumn there is usually a plentiful supply of corn left in the fields after harvest.   But now that these supplies are drying up, the rats come in.   There are chicken feed bags, cattle feed bags, wild bird food and the like to forage for and every farmer has to be especially vigilant.

Our farm cats catch plenty of mice but the farmer has never seen either of them tackle a rat.   Rats can be seriously big.

We have, as you know, just bought ten new pullets - small, rather nervous birds - and quite easy prey for a big rat, so the farmer checks the traps each morning.  Image his surprise this morning when there was a dead stoat in the trap under the hen house.   Stoats can be large (this one was the biggest the farmer had ever seen) and could easily steal pullet eggs, or even a small, nervy pullet.

But it is sad that they are such predatory animals because they really are quite beautiful - closely related to the ferret I believe.   This one is now buried and no longer a threat to our new hens which are settling in nicely and beginning to lay (four our of the ten are laying a small, brown egg daily and the farmer has fixed up a time switched light to give them a bit longer daylight to encourage them to lay.   So sorry Mr/Mrs Stoat but you just happened to be in the wrong place at the wrong time.

Image - Wikipedia.
Posted by The Weaver of Grass at 07:31

Rats, our old cat was very good at catching them. Alas he is no more.
The greatest enemy to the farmers in Ireland and a creature who is far more vicious than a rat, towards domesticated fowl, wildfowl, fish and small animals is the wretched Mink. For the mink has no predator in Ireland other than man.

Our home is basically in the woods, with a creek nearby, so we occasionally see these undesirables ourselves. Fortunately, only outside. But several years ago, we attracted a family of owls that has obviously decided our little plot of earth is a marvelous place to live and raise families. We hear them calling almost every night - a utterly delightful sound. Since they moved in, we've not seen a single rat. Nature taking care of herself, I suppose. Personally, I much prefer the owls. xx

My brother kept the rat book at the farm for the purposes of Defra inspections and we had very few if any although it was always good to record a dead one found to keep Defra happy when they called. Now that I live away from the farm I have a neighbour who feeds the birds and puts food down on the ground as well as in birdfeeders. I have seen more rats here than I ever saw at our farm. My cats catch them, and bring in to me, the most awful gigantic rats to my house, so far all dead and presented to me. I have spoken to the neighbour, a lovely person in all respects except perhaps in rat management, but to no avail. We also have a mink problem in Norfolk, as Heron mentions above, when mink escaped from a mink farm some years ago and now live wild around here. I see lots of weasels and stoats in Norfolk and they are a beautiful sight as they run across the lanes and roads. There seems no shortage of them.

Some years ago somebody saw a mink here on our beck but I have heard nothing of it since. There are otters in the River Ure, only about two or three miles from the farm.

They are beautiful, aren't they.
I once had my cat tackle a big rat that was charging my neighbor's chained little dog. My neighbor came to see the fuss and dispatched the rat with a shovel. My neighbor, never a cat lover, thought my cat a hero.

We have Pack Rats were I live. They take anything they can get their paws on and eat my favorite cactus and veggies.
Then they eat the wires in the cars and burrow into the house if you don't keep track of them.
So distructive. I have a service that comes out four times a year to check and trap them. Right now I have one big and two small nests close to my home.
I was going to ask about how the new chickens were doing yesterday !

We had a family of stoats set up home in a field shelter - without us knowing obviously- we knew they were there when they killed a couple of chickens and bit their heads off!

Stoats might be pretty animals but they can be very vicious. Glad the hens will be safe from them and rats too, hopefully. It isn't nice having to set traps but we have had to do it when we saw a rat in our garden. We had mice in our larder when I was a child and my father set one of those old spring traps. No sooner had he sat down than we heard it go off, so he removed the culprit and reset it. This happened 6 or 7 times during the evening! We felt rather guilty, but at least the larder was free from infestation and the germs mice can carry.

You are certainly in a privileged place to experience and share the dramas of real life.

I once bought a dozen Guinea Fowl chicks, and the rats had the lot. I didn't even have time to set a few traps.

When I was walking through a short alley between shops in Harpenden yesterday I saw 2 rat poison boxes on the ground. For many years we had a problem with rats getting into the kitchen behind the cupboards somewhere. Eventually my husband took the cupboards to bits and found the entry point which was then filled with cement and broken glass. The little devils used to climb into my rubbish bin under the sink, and also into a top drawer where they would chew the oven glove! I could often hear them under the floor. We have had them in the garden too, but hopefully now my schnauzer would see them off!

It is the cold that brings the rats in, we have had one in our compost bin, I suppose rat poison is the best option. My three hens are feisty, so would probably go for one, they chase the squirrel out of the garden.

Thanks for all those interesting stories about your adventures with rats - seems we are not alone.

I don't think you'll ever get rid of rats, but they don't carry as many diseases as people think. Shame about the Stoat- beautiful creatures and so nervous of people. I see them when I'm out water vole surveying gamboling along the river banks from time to time.

Rats do not only live in the country. Somehow they seem even worse pests in the city.

Now I am curious. Our cats get rats all the time. Here in the Pacific Northwest, USA, we have both rattus rattus and rattus norwegicus. And they're big. What species of rats live in the UK?

Rat poison kills raptors and pets as well as rats. I know traps don't always work but between traps and our cats we keep the rat population down to where we can live with it.

Okay, I just looked it up. You have the same two species of rats in the UK as I have here on my small island. Do you have small cats? It could be that since there are no mice or voles on this island our cats aren't spoiled with smaller, easier to handle prey??