It's that time of year again.

Two things will make a difference to the amount of traffic which passes through the Dales during the next week.   The first is that it is almost time for the TT Races on the Isle of Man.   I hear from Denise (Mrs Nesbitt's Space) that they will be passing the end of our Lane shortly on their way to catch the ferry over to the Island.  Many motor cyclists from the mainland go over for the racing, catching the ferry at Heysham and crossing the Irish Sea.  Many of these motor cyclists make their way through Wensleydale - quickly.

The other event which starts a week on Saturday is the annual Appleby Horse Fair - an event which has been going for many years and is an opportunity for the travelling folk to meet up.   Over this week 'gypsy' caravans have begun to appear on various village greens as their occupants camp for the night, feed and water their horses and then continue along the route the next day to Appleby in what used to be Westmorland.   There they all set up camp and trade horses.   I have always wanted to go as I understand that it is very colourful occasion but I can't persuade the farmer to come with me.

This morning we had occasion to go to Hawes and we saw half a dozen such caravans.   Each time the farmer slowed down to help me to get a good shot.   I give you them below.   Please bear in mind that they were all taken through the window of the car as we were going along.  But I hope the shots will give you a flavour of what it is like here at present.  One of the outfits was particularly smart and the horses were splendidly turned out - perhaps you can see which one. 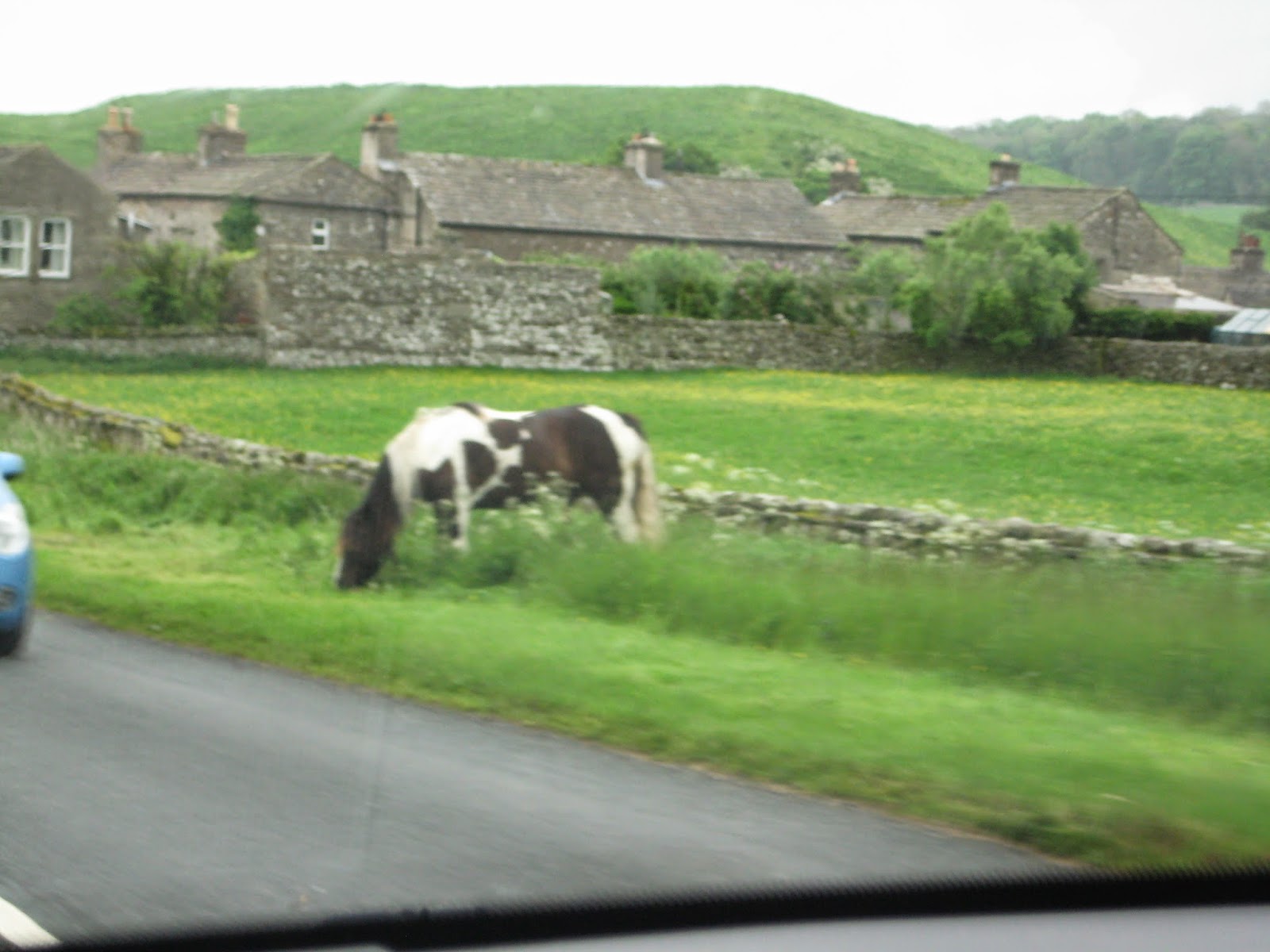 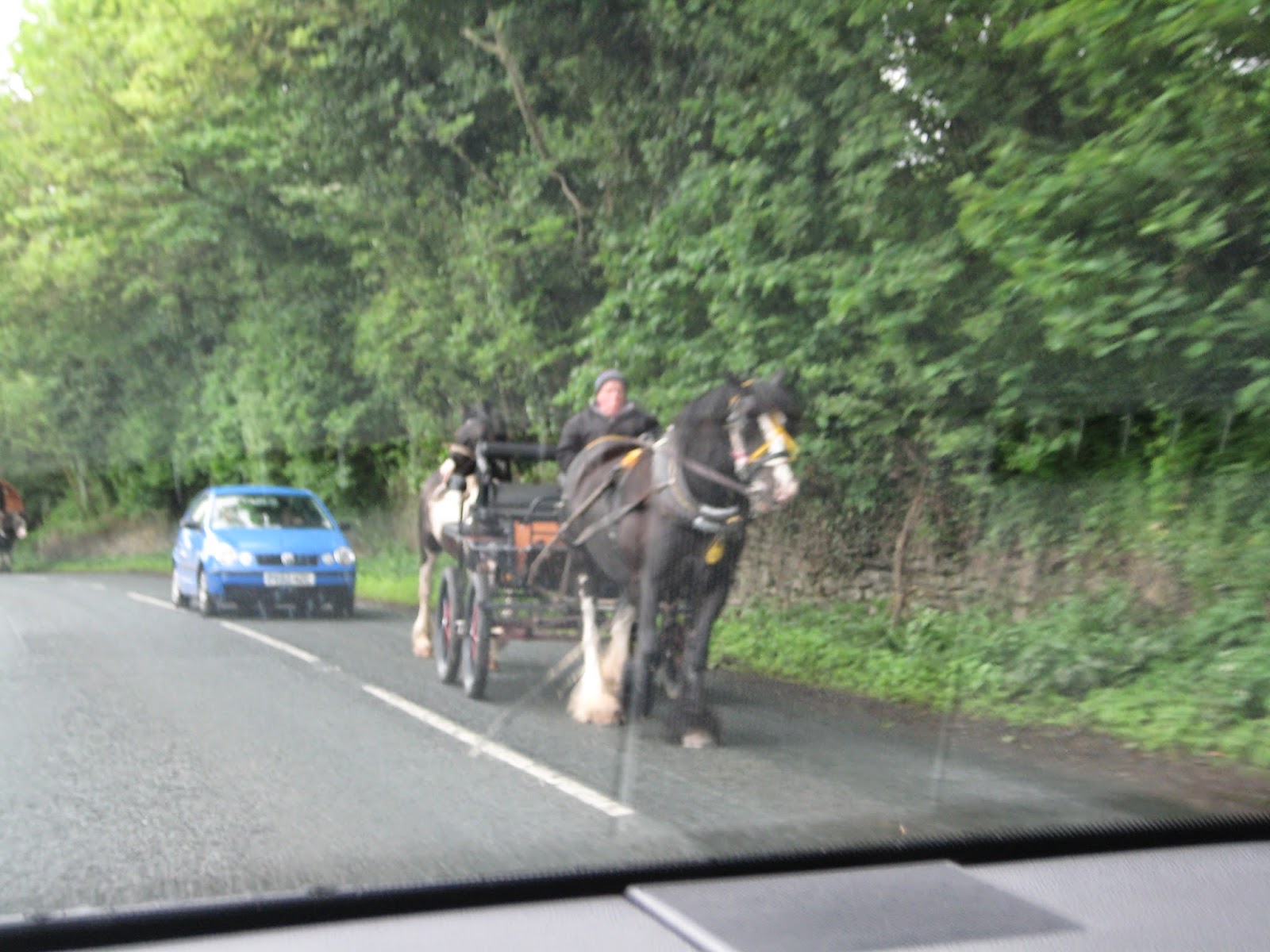 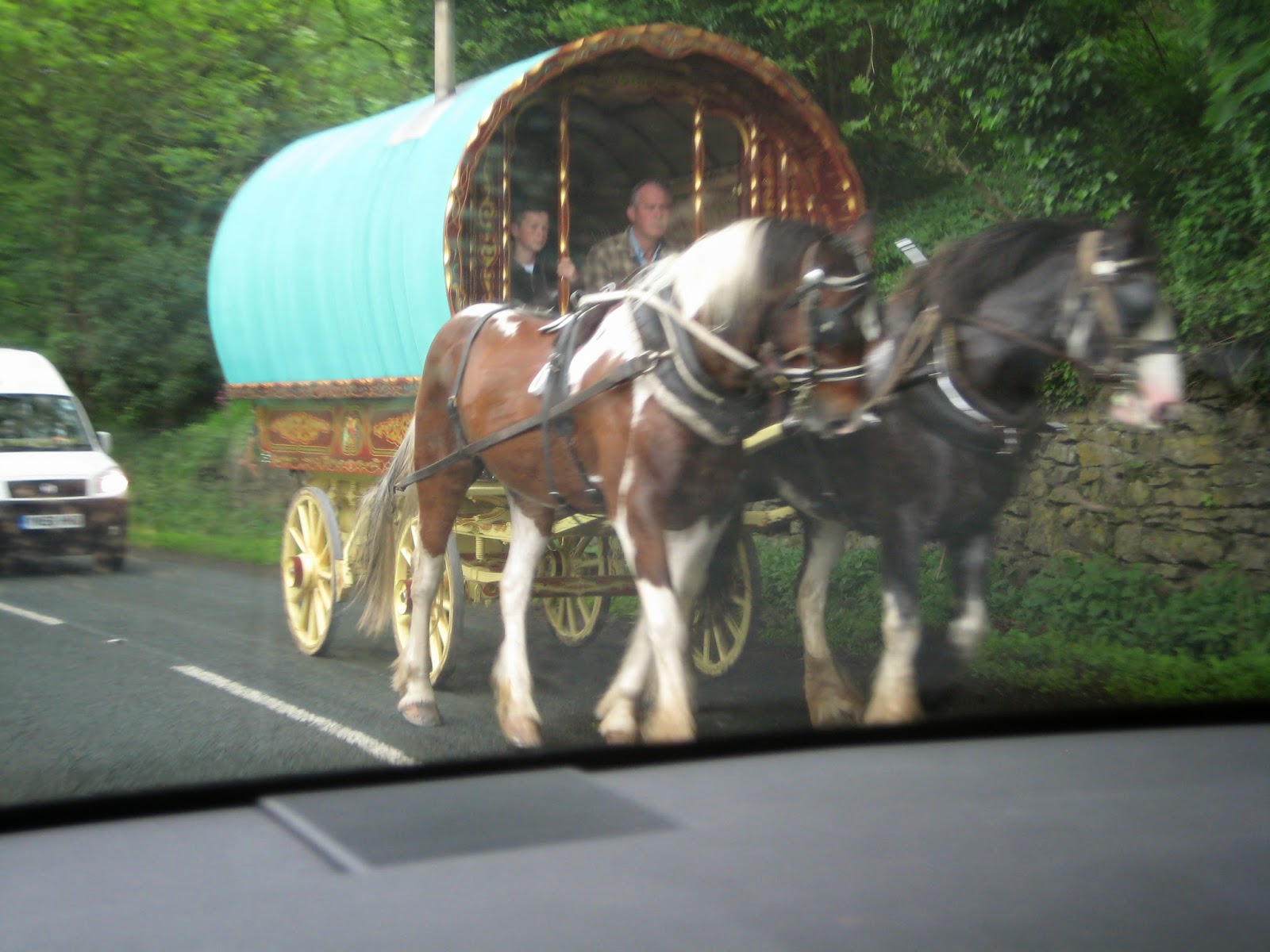 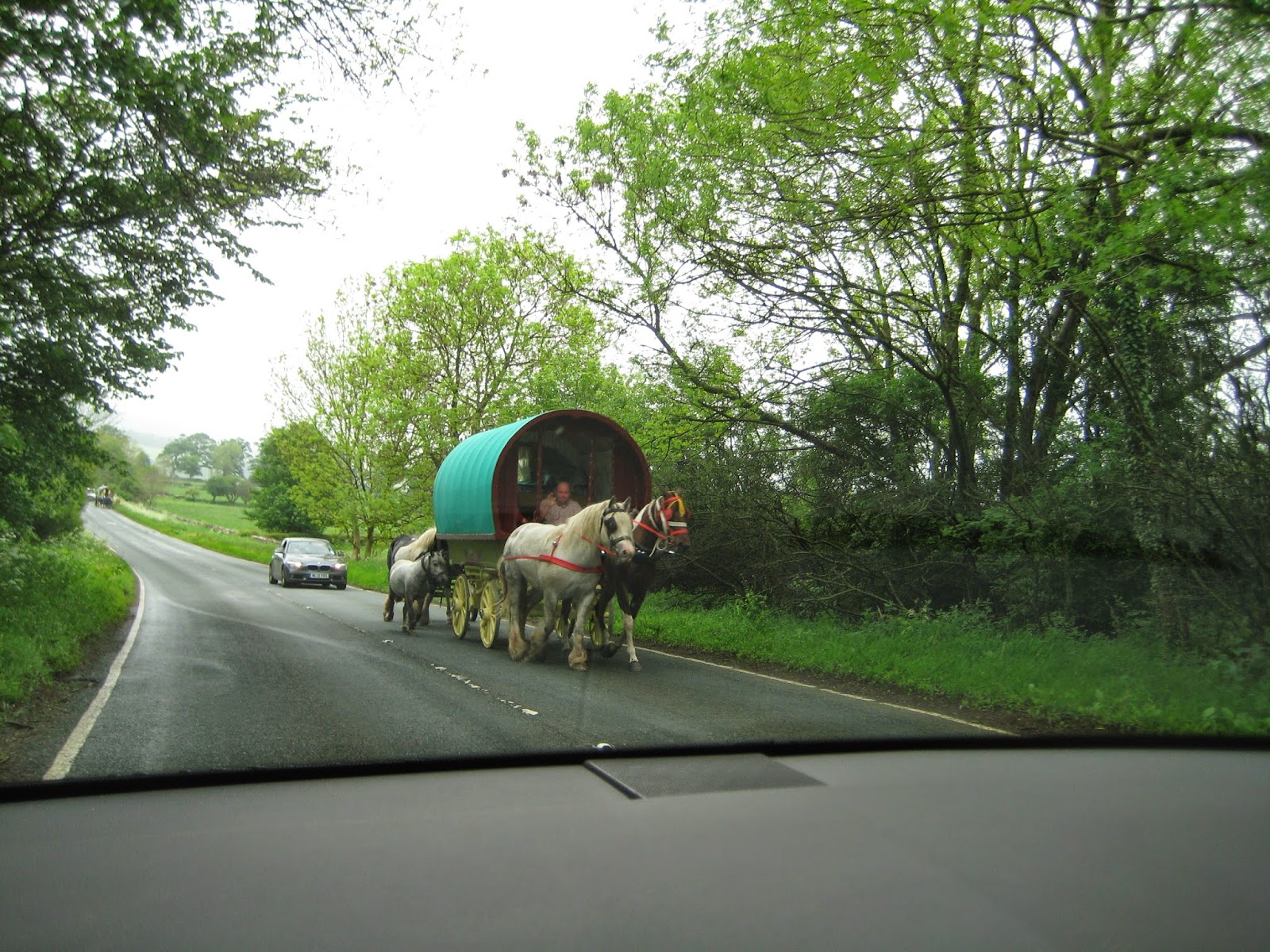 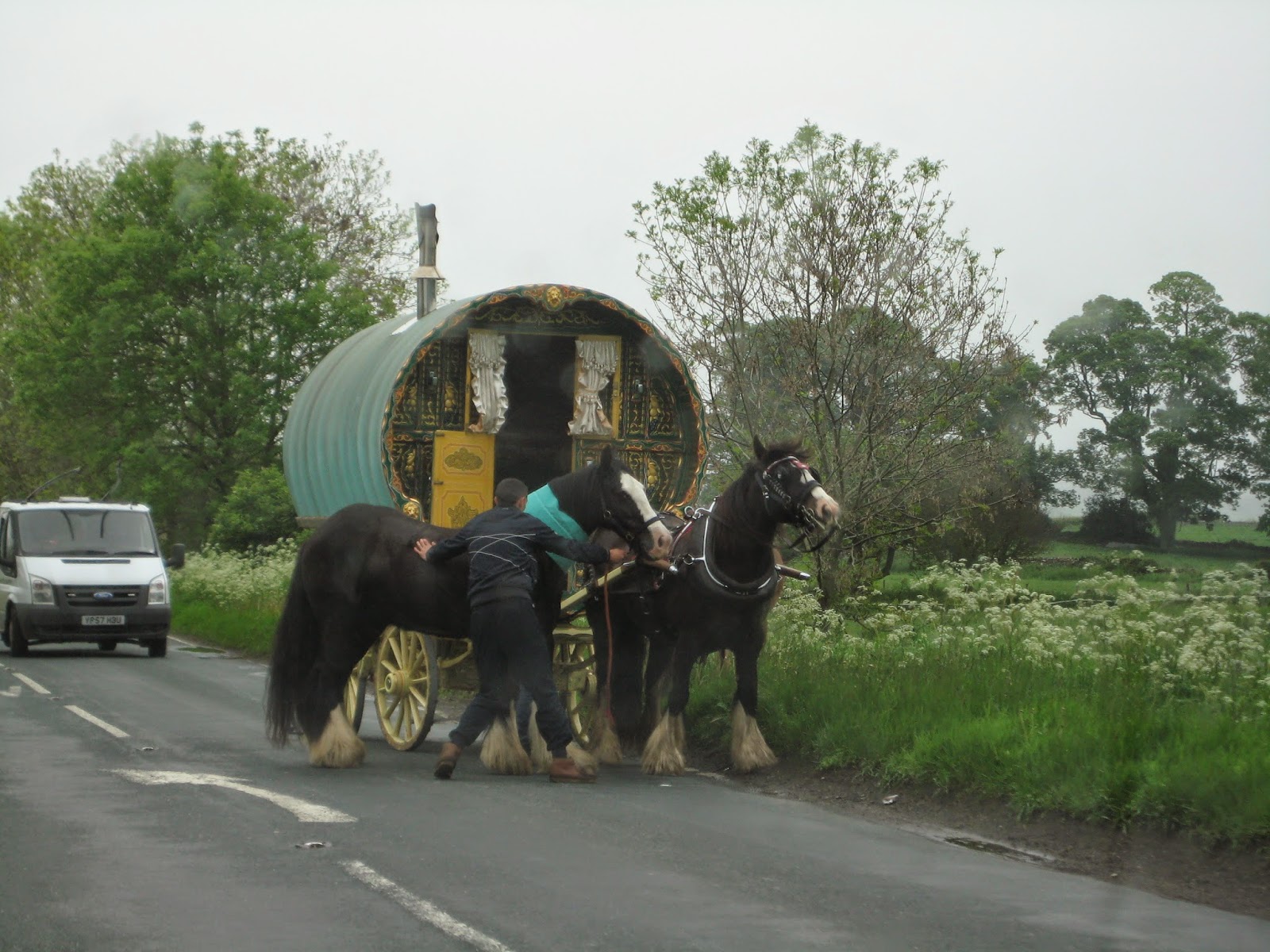 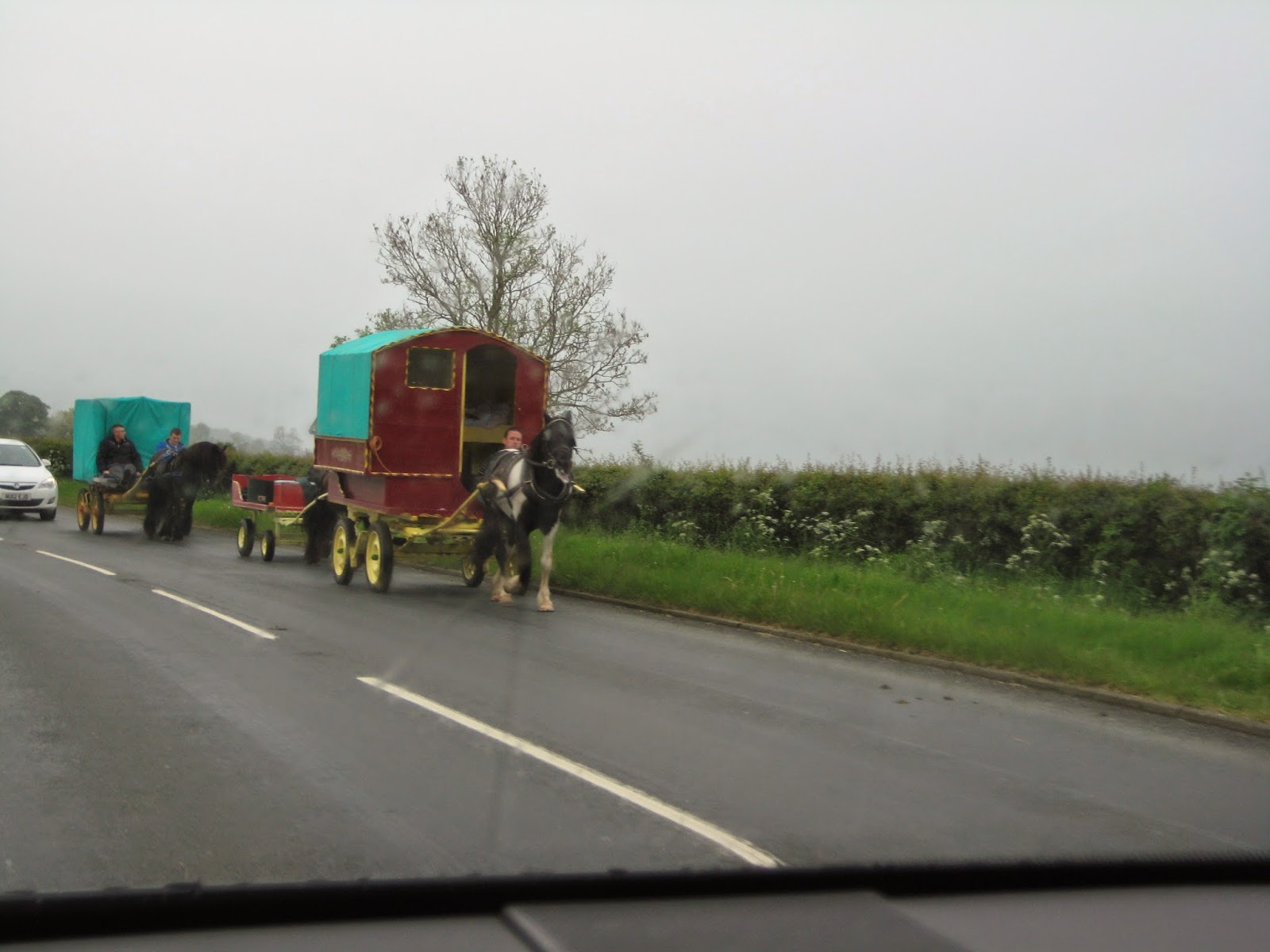 Wow, nothing quite like that in this part of the United States, though perhaps the Amish have the same kind of wagons.

Gypsies in America seem to have been replaced by Mexican men, but when I was a child my family used to pick walnuts with gypsies who followed the crops - but they always travelled in pickups pulling large trailers, not horse-drawn wagons.

I've seen the Appleby Horse Fair on TV. Was very interesting. The whole gypsy culture fascinates me. We have a large population of Romney folk about 90 minutes west in West Virginia.

I wouldn't like to give up my mod cons for a travelling life, but I love to see 'proper' gypsy caravans going about their business. It must be a hard life and I daresay I have a romantic view of it. Hope your village isn't overwhelmed by all the extra traffic and visitors.

Great photos and they give a flavour of the build-up to the Fair. Where I grew up there were lots of gypsy horses kept (tethered usually) and driven around, and such photos are familiar to me. Thanks for sharing.

Wonderful photos. I hope the horse being changed (?) was alright. I worry about crazy drivers driving fast.
I love the photo of the wagon with the pony tied up. I hope they don't get too tired.

The hours fair was subject to a documentary on tv last year... Interesting look at a culture foreign to most uk residents

What wonderful things to behold. I'd love to see the horse fair too.

Those Irish 'Open Lot' vans are designed to be pulled by a single horse.... why do they have two? Maybe one is for sale.

"The Weaver of Grass" has been included in Sites To See #374. Be assured that I hope this helps to point many new visitors in your direction.

Having been to Appleby Horse Fair, I have mixed feelings. I wouldn`t want to go again.

Mr DW`s grandfather was a magistrate at Appleby and lived in a village just up the Eden Valley. It`s a beautiful old town.

Many of the caravans had three or four horses tied to the back (we saw far more than I have photographed). Yes, they would be for sale - it is a fair for trading horses. I too worry about the welfare of the animals and about their ability to pull the carts such a long way but they are mostly heavy horses and they are tied up in good grass at night.

Good to see the Barrel Tops in use and especially the one with the stove pipe. I used to have one in my back garden was storing it for friends, who sadly came back for it.
Incidentally Cro is not correct in his assumption, for The Barrel Tops were introduced into Ireland by British Gypsies circa 1915.

Love the caravans. The great horses are very beautiful. I think I could cope with a moving life if I moved that slowly!

What a treat to see such things as gypsy caravans! Love your country lane picture that welcomes one to your blog!