This clock is part of the fabric of the farmhouse.   It has been on the wall where it is now for as long as the farmer can remember and certainly for twenty years before that.   In order to keep good time it has to sit at a slightly 'off' angle.   In fact in many ways it is almost in charge of the house.   You can hear the chimes on the hour and on the half hour from anywhere in the house,   I would not like to take it down from its place.

But isn't the brain a strange thing?   At this time of the year, when the weather is cold and frosty, the whole chime of the clock alters.
If there are any clock enthusiasts reading this then maybe you can tell me why this should be so.   However warm it is in the room (and this is the room with the wood-burning stove) the clock still has the most unmelodious chime.   As the farmer says - it suddenly sounds as though somebody is banging an old biscuit tin with a wooden spoon.   Gone is the pleasant, musical sound it usually makes.

When the farmer said this I was immediately transported back to my childhood and a day when we went to visit some people called Mr and Mrs Mettam.   I can't remember who they were, where they lived, or how old I was.   But what I do remember about that visit is that it was a bitterly cold, frosty day and that the Mettam's had a wall clock rather like ours.   And it struck rather like ours does in this weather.   We didn't have a car and had to come home by bus and I vividly remember standing with my parents at the bus stop and them in fits of laughter at the sound this clock made.   And ever after that any such sound got the response from my mother of 'Mettam's clock'.   The memory gave me such a warm feeling.

And speaking of such feelings, I have just made a bowl-full of Christmas mincemeat - suet, dried fruit, chopped apple, oranges and lemons, soft brown sugar, cinnamon and mixed spice - all stirred together with a generous helping of rum.   Now it must sit in the bowl until tomorrow afternoon when I can pot it up and store it ready to make the mince pies.   In the meantime the whole house smells of Christmas and it sort of gets the season started. 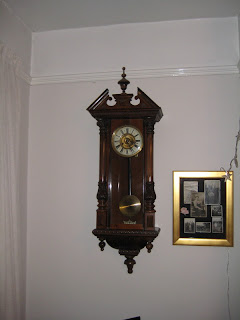 Last night I wrapped the presents.   The wrapping paper was covered in gold glittering snowflakes.   Remind me next Christmas not to by glittering paper.   The whole house, the carpets, the table, my hair, my clothes, everywhere is covered in tiny fragments of glitter.   I love glitter at Christmas, but you can have too much of a good thing.
Posted by The Weaver of Grass at 08:08

That is a very handsome clock Pat. Maybe clocks are sensitive like pianos, they also like a constant temperature, but you would think a warm room would suffice.
I love making mincemeat - the smell is almost better than the taste. You probably look very festive yourself, covered in glitter!

This clock, and your tribute to it, are wonderful. I like to think of them as some kind of guardians, they do seem to become part of the fabric of our lives, especially when in the home for a long time. The glitter made me smile! ; ~ )

Clocks are quite contrary things.
I have my grandmother's French carriage clock which is meant to be wound up every 7 days.
Well, it stops and starts and chimes utterly at random.
No use trying to fix it. Sometimes I think it is utterly dead for months and then it starts up again.....

I hate mincemeat but others love it......

Yes, glitter is much over-rated...metallic confetti even worse for carpets and pets and small children.
How about making gift wrap at home by making potato prints.....? Well, just an idea!

I think clocks must have characters - yours certainly sounds to have one!

I've not made mincemeat this year - normally I do it (the recipe I use sounds very like yours) when I pick the apples in the early autumn, but I do have some left from last year, and I am the only one who eats mince pies anyway (my husband says they are fattening! Hah - there's nothing of him either . . .)

Gold glitter is beautiful, and you must look so festive! :) I love old clocks. Especially grandfather clocks. What a warm memory you have.. sweet how sounds and scents bring back the most vivid recall..

My grandparents had a clock in their house like that and when ever I hear a similar chime, it transports me back. I thought I was ahead having finished the christmas shopping but you're putting me to shame with your efficient wrapping!

We have two old family clocks now, but neither of them are set to chime as we are light sleepers and cannot sleep through the sound. Sometimes one of the clocks chimes as it is moved or polished and I am immediately taken back to my childhood, with the same clock chiming in my grandparents` house on a Surrey hillside.

Ah, glitter paper lol Been there, done that and decided the precise same as you have - lovely to look at but never again :-) Still finding glitter in unexpected locals and it's been several years!

I wonder if the seasonal tonal difference in your timekeeper is related in any way to the differing dryness in the (beautiful) wood of its cabinet - or an interior wood chime support - reacting to the season - heat or damp? Much the same as wood instrument sound can be altered by damp moisture or dry heat....

(or perhaps you've a ghostie who's unfond of the winter and influences the clock adversely to show its displeasure with the snows!? lol)

I have something similar in my house, though it's only about 15 years old. It has to be slightly skewed to keep good time too. Can't say I'd noticed any seasonal change in tone though.

You have given me the gift of Christmas smell today. Thank You

Is it against an outside wall, or a wall that has a colder room behind it? I'm guessing some sort of temperature differential between summer and winter on the metal. One of the reasons Harrison used temperature compensation. But that is a guess.

Weaver, you shame me! I haven't even bought the presents yet. Lovely thinking of you and the house covered in glitter.

mmmmm Homemade mincemeat - I love it! My mother made it every year and there was nothing as delicious.
We have a wall clock that was an anniversary gift to my husband's grandparents. I have always thought that the difference between the summer and winter chimes was the temperature of the wall. It hangs on an outside wall.

At night, or when I'm concentrating or trying to sleep, I have to put the clock in the kitchen or stay the pendulum. I can't stand the tick-tocks. But next year why don't you wrap your presents in the same paper people wrap yours in. That's what I do. I call it Xmas recycling.

The aroma of the mincemeat is in my head...and all that glitter? Just makes you sparkle a bit more!

We have a clock similar to yours and my husband says that the metal workings of the clock, which includes the springs (which control the chimes) expand and contract with the temperature.
So the gongs will hit harder or softer, that's the change in tone.
The reason for the harsher chimes maybe that the gongs are not lined up with the chimes. They can be adjusted by hand or with a screwdriver.
Hope that helps.
However if the clock is the age he thinks it is don't play with it, enjoy it when it sound s good, the springs are the achilles heel of this type of clock.

Thank you for visiting and for the helpful comments on the striking of the clock. As snow is forecast for tomorrow I can only expect the chimes to deteriorate further.