Is the ash tree doomed?

I read in today's Times that the Chalara Fraxinia fungus, which has wiped out 90% of Denmark's ash trees, and is widespread across a lot of Central Europe, has reached our British woodland.

And I am taken back to the mid-1970's when Dutch Elm Disease more or less wiped out our beautiful English elm trees.   At the time I lived in the Midlands in a house which was built on what had been woodland and as a result we had three old elm trees at the bottom of our garden.   I remember watching them anxiously for the first signs of the disease and finally one morning seeing that the leaves were dying and beginning to drop although it was only early Summer.   We had to have all three felled.   It was such a sad day.   Now it seems as though it might happen all over again.

Ash is such a quintessentially English tree.   Years ago they were such useful trees for the farmer to have on his land.   They made splendid fencing posts and cart shafts and could be used for all kinds of repair jobs around the farm.   They also burn well on the fire.   Now on farm land they just stand proud.  The farmer has no use for cart shafts and buys his fencing posts ready tannelised.   He might use the odd branch for firewood - but other than that they are just roosts for birds.

But that doesn't stop the ash being an important aspect of the country scene.   If the disease spreads to our area we would lose about eighty percent of the trees on our lane and farm.   There are old ash trees standing in the hedgerows and there are saplings which have seeded themselves in the hedges.   These are cut back every year but by the end of the Summer they have risen up again.   They look so hardy and unstoppable.

Some of our ash trees are festooned with ash key seeds, other trees are bare and seem to be sterile.   Some drop their leaves early and some hang on to them until the first frosts.   All make a terrible mess when their leaves fall.   But I forgive them that when I see their Winter branches full of rooks on a Winter's morning.

I would miss them terribly.   The Woodland Trust is trying to stop the disease from spreading and becoming established by supporting a ban on importing and moving ash trees.   I cannot understand why we should have to import them when we have so many here already.   Does anyone reading this know?    Is ash still used extensively in furniture making for instance?

When I think of all the thousands of ash tree seedlings which emerge in our fields every Spring and which just disappear by being eaten off by cattle and sheep or trampled down - I think surely we don't need to import ash. 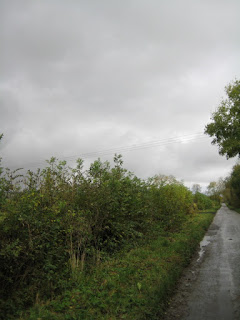 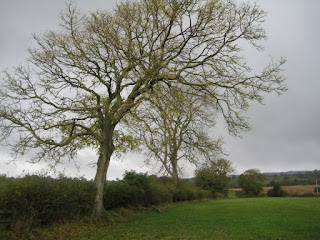 On a different theme  - thank you to all those who wrote with suggestions for improving my piece for my writing group.   I have taken your suggestions to heart and have altered the piece.   The new version is yesterday's post if you want to see what I have done to it.   Thanks particularly to AJ, Gwil and Seeking Center.

But then I wouldn't have thought we would have had to import Brussels Sprouts - a commonly grown English vegetable at this time of the year - but when I got mine home from Tesco yesterday and opened the pack to cook some for lunch, I saw that they came from Holland.   Has the world gone mad?

Oh yes the world has gone mad, it's only the little people who are still sane. All the ones with any power or money are all truly bonkers!

it is a little too early for uk sprouts; it is said they are best when they have had a few frosts on them and harvesting around here starts in December.

Sorry to say that I did a post on this a while ago, and I offered any British Ash saplings to anyone who needed them, as I am over-run with them here in the S.W.

Nobody took me up, but the GUVERNMUNT has only just got around to the idea of banning imports. Too late.

The short answer to your last question is: Yes.
I read a similar article in the Telegraph and remembered the magnificent avenue of elms through the park leading to the church in my home town. The park looked awful after they had all been felled. Everyone felt bereft.
I imagine we have signed ourselves into various trade contracts under the EU which obliges us to import so many products which British growers would otherwise produce.

Yes, I heard the same about the ash on the radio just now, Pat. Though I think the disease can be controlled with careful monitoring. I hope so, anyway. We too have lots of magnificent ash trees round here.

Sprouts from Holland? That's EU trade for you — but don't forget we're probably exporting stuff like celery and other stuff into Europe too. All of which has helped to boost the 1% growth figure that's been revealed today. We've waited long enough for it!

I think we must all make an effort to be well informed before we make any judgments. We may jump to conclusions too quickly.

obviously the world has grown mad. But here we are and what do we do now? We carry on as always. Importing flowers and shrubs to Hawaii ( ! ) has brought our Big Island the Coqui frog - a new sound in the night.

"But I forgive them that when I see their Winter branches full of rooks on a Winter's morning.

I would miss them terribly. "

Yours is a voice that never fails to reward my time and attention. It is a privilege to share your hospitality.

The world has, I fear, been mad for a long time.

The two ash trees that fell on our hill this summer appeared quite rotten at the core. I wonder if they were affected by this fungus? A horrible thought as there are so many ash trees in the New Forest and the lanes and woods would be bereft without them.

The same thing happens here. How mad is importing pineapples into Queensland ?

I hope that you don' lose the Ash Trees. They are beautiful.
Something similar, when I lived in Southern California, it was the fruit fly. The Stated whet as far as evening spraying of malathion to kill the fly that could destroy the California agriculture industry. They have been somewhat successful but there is always a quarantine area somewhere.
Good luck protecting your trees.

ack ! so many spelling errors, never comment when you have a headache !

There are SO MANY ash trees here in Wales that it would be absolutely decimated if they were to die. Our leafing up always seems later than along the Welsh marches, because we have so much ash and it is the last to get leaves (and then the first to drop them). Quite WHY we have to import ash trees is beyond me too. . .

I was reminded, watching the last Wartime Farm programme last night, just how wasteful folk are these days and how much we rely (once again) on foreign imports. I'm all for food in season . . . and home-produced where possible. Whatever happened to all the little market gardens which used to surround towns and cities and which had roadside stalls that people would shop at when they were "out for a spin" on a Sunday?

Ash is one of my favourite trees, it would be tragic if we lose them, there are so many of them as well - what would be left of our woodlands? The ban on imports starts Monday but i have a horrible feeling it will be too late.

The world has indeed gone mad. Here on the Island we used to nearly feed ourselves - 80% of what we ate was produced here. Now less than 20% comes from the Island and I've heard that, should we be cut off from the mainland for more than 48 hours there would be nothing available to eat here. All the processing plants have closed and moved to the mainland and nearly all the farms have disappeared under housing subdivisions.


sad to hear of your Ash problems. Here in Ohio (and more states) they are dying out because of Emerald Ash borer. We lost the true chestnut which was one of the most abundant trees in Ohio forests in the blight in the 30s and 40s and the elms in the 40s and 50s. The lovely flowering dogwood in our woods is dying out. I try to plant for diversity. It seems the only hope.

I agree, a total tragedy. So much worse, somehow, than the Dutch elm disease. I'm trying to think how much the worst scenario would change the English landscape...

Tom Stephenson that GUVERNMUNT you speaketh off wouldn't be the same GUVERNMUNT which hallowed the moat famous grice Kornish bauer to fetch the Mad Kuh Krankheit south from its point of origine in ye Bonnie Schottland despite rall egrulerelations now would it?

Thanks for all your comments. I leave it to Tom to decipher Gwil's comment!
Rachel and The Solitary Walker both make good points about our imports too.

Thanks for all your comments. I leave it to Tom to decipher Gwil's comment!
Rachel and The Solitary Walker both make good points about our imports too.

I remember the way Dutch elm disease devastated the countryside. I hope the ash fares better.

Your art story is much better now. You can be really proud of it.

Saw a 270 year old weeping ash at Seaton Delaval today and wondered how much longer it would have to live.

I'm writing this 15 minutes before the ban on imports comes into force. Why on earth has it taken so long?