. I think it is true that, as John Steinbeck says, you can't go back. He says that the trouble with going back is that you have gone away and changed over the years but the place you are leaving has the locals staying as they were, so that when you return you are a stranger. And furthermore, the buildings and the layout change so that everything is unfamiliar. He cites Salinas, the place where he was born. He says, "The place of my origin had changed, and having gone away I had not changed with it. In my memory it stood as it once did and its outward appearance confused and angered me." He calls to see old friends and after a few minutes he finds his attention wandering and realises that the same thing is happening to his old friends - his town has grown and changed and his old friends with it, whereas he has gone away and his return has muddied the memory for his old friend. I found that when I returned to the village of my birth in Lincolnshire a couple of years ago, it had changed out of all recognition. When I lived there there were only around three hundred inhabitants, and as a nosey-parker I am pretty sure I knew them all, knew the names of their houses, had been in most of them and certainly spoke to each and every one of them when we passed in the street or met in the local shop. When I returned there were around thirty thousand inhabitants - a number of huge housing estates had been built, and all those meadows we played on as children were now covered in almost identical houses, where everyone had done their level best (to no avail) to make their house different by the addition of a different kind of front door, different windows, stone pots on the step, different shaped lawns. It made little difference overall - this was now a dormitory 'town' for the city of Lincoln and you barely knew your neighbours. Today the farmer and I went for a walk in Arkengarthdale. It is one of my favourite Dales because it has hardly any houses and everything is as it always was. I no longer have the mobility to walk all that far, particularly on uneven ground, but we went intending that I should rest and the farmer should then go on further while I enjoyed the glorious sunshine. We walked for about a mile on rather damp ground, then I put down something to sit on and sat with my back against a stone wall, while the farmer and Tess carried on. This backfired rather as Tess did not like us to be parted and so wittered to come back. In the end we all sat in the sun and ate our sandwiches. There was a ram in the field with his flock of sheep and also three young heifers. I gave the ram a wide berth but the farmer walked fearlessly close to him - he never took his eyes off Tess. He is obviously in the field in order to do his annual job because tucked into the wall by the gate was the raddle, ready to mark his tummy, so that when he mounts his girls they get a red mark on their bottoms, which says he has been there, done it and got the T shirt, so to speak! There was a Dales pony too, who came to the wall to say Hello. As we were eating our lunch I remarked to the farmer that this was certainly one place where things had not changed over the generations and that looking at the land, everything was as it had always been. At this, the farmer pointed out just how many changes there had been:- 1. There was a quad bike standing in the farmyard we had walked through, so the farmer no longer had to tramp the fields in search of his sheep. 2. The stack of silage bales wrapped in black plastic in the yard signified that he was no longer having to make hay regardless of the weather. 3. The oil tank by the farmhouse showed that much of the farm was now oil-fired, so they probably had central heating, cooking facilities etc. 4. There was electricity. 5. There was a 4x4 and a smaller car in the drive so the farmer and his wife would be able to get into the nearest town with ease. (Tesco is about ten miles away, Richmond about the same distance. How would they get there before?) I suppose the moral is that things are constantly changing, so are we and that perhaps it is wisest never to go back as everywhere and everyone changes at a different pace. You will notice that I still have not managed to get the sheep photograph on. I shall try again. In the meantime, I shall put today's photographs on but where abouts in the post they will go will be entirely at the discretion of Blogger, which seems still to have a mind of its own. I shall get used to the new format eventually but in the meantime - many apologies for various cock-ups. For some reason strange letter formats also keep appearing among the text - has an alien got in? 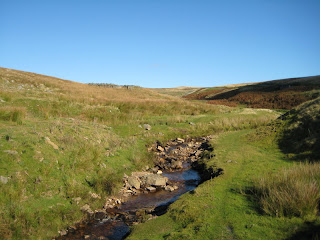 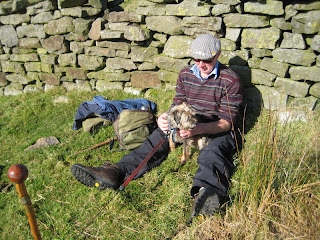 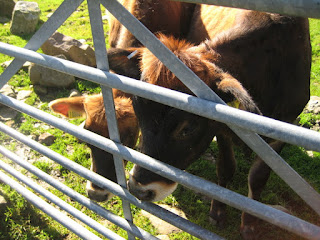 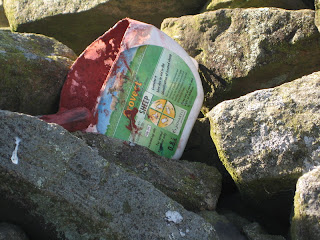 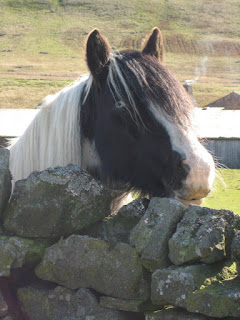 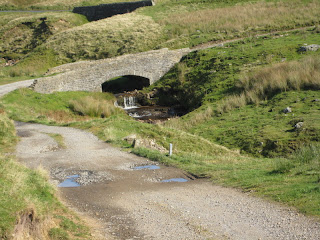 Beautiful photos Pat - we had a lovely day yesterday here as well. I can sympathise with your exasperation with Blogger - why do things have to change!! Very apt.
I went back to visit an aunt many years ago to find my grandmother's paddock and that of a neighbour, had become a small estate of houses. I could walk to the end of the road and peer through into what had been my grandmother's garden and my childhood playground, but of course could not go in. It felt horrid. Is it an age thing, not wanting to accept change?

Wonderful to walk with you in the country in such fine weather. We often think about"the good old days" , but life was a lot more uncomfortable than it is now. We don't like things to be changed for the wrong reasons , I think. Change, however is inevitable, though not always for the better.

John Steinbeck wrote a book about piles too, didn't he? 'The Grapes of Wrath'?

(I'll read your post when I get my new glasses.)

We had the same bright sunshine yesterday. Your Dales photos are lovely. I`m sure those places are still much as they used to be.

I returned to my childhood village last spring. So much was the same, but all the old souls I knew had gone and all my contemporaries will have moved away. It is a bitter-sweet thing to walk around the places where old friends used to be.

That was poignant, Pat.
When I return to the town of my birth I see a great deal of change. The hospital is gone, as are several churches. There is a consolidated school, no gas station and no grocery stores. It's become a very sad and empty bedroom community.

Enjoyed your photos Pat. Where I grew up there were post-war years children everywhere. It was a bustling thriving area of young families in war service homes. Now very old people are left, with many a run-down house in disrepair - quite deserted really.I remember the area so differently with young mums happily waiting at school bus stops with their children, chatting away with others - everywhere you looked then there was someone with a pram.
Sad to see it run down and quiet these days.
The rural scenery in England is beautiful - very different to what I grew up with in Australia.

Thanks for visiting. Sorry about the close format - of course (as anyone who is not a complete nutmeg head will know) the 'alien' writing was blogger's idea of paragraphing. I rubbed it all out - so sorry Tomn - you don't need new glasses - it is my tiny type! As for your comment about The Grapes of Wrath - very funny - it happens to be one of my favourite books - shall never read it in the same light again.