There is something about the word 'sentimental' which brings out a reaction in people. For example - a lot of people dislike PreRaphaellite paintings because they seem to have a sentimental element. The same is true of poetry - sentimental poetry is frowned upon. Well I have had a surge of sentimentality over the last couple of days and I am not ashamed to admit it. I was born in a fenland village in Lincolnshire; a village where everybody knew everybody and where no event, however small, went unnoticed and untalked about. Well, over the last two days it has all come back to me with the reading of a fabulous book of short stories: Louis de Bernieres 'Notwithstanding.' If you haven't already done so, please do try and get hold of it. Of course, we all know he is a marvellous writer anyway (Captain Corelli's Mandolin among other books) but his turn of phrase in this book of short stories about the village of Notwithstanding is just superb. It has had me bursting out laughing time and time again as he describes events and people. An example, which I am sure will be so familiar to all 'doggy' people, comes in a story called 'All my Everlasting Love' when a boy is about to take his dog for a walk. At the appointed time he calls his dog, which de Bernieres says 'has been sighing pointedly since early morning' He says the dog 'sighed and waggled his eyebrows, affecting an air of suffering, but as soon as anybody went to the walking stick stand or fetched wellington boots, he would lift off vertically into the air bouncing straight up and down so rapidly that it was impossible to attach his lead.' He then goes on to say how they used to say 'walk', then began to spell it w-a-l-k, then called it 'promenade', then 'spaziergang', then 'paseo' and finally 'peripateion' with the dog a mere one linguistic step behind. Anyone who has ever had a dog can't help but recognise their dog in that. Well this sentimentality seems to have spilled over into all areas, because today was my hair appointment day in Ripon - a distance of about twenty miles. Coming home I took a different route, along a high country road between rolling landscape. Fields had been ploughed to a deep, rich brown; corn had been harvested and fields of golden stubble shone in the Autumn sunlight; the trees were beginning to turn and everywhere I looked the scenery was breath-taking. I was so overcome with it that I pulled into the side of the road and sat and looked at it for five minutes. Call me sentimental if you like, but the weather is set to break tomorrow and I wanted to fill my soul with this Autumn scene before I became soaked with rain again. Sitting with the car's windows open, the air was full of the sounds of crows, who have all begun to gather together again for winter. The stubble fields were full of them and any road kill (pheasants, squirrels, rabbits, hedgehogs - everywhere)was being quickly devoured. Robins' 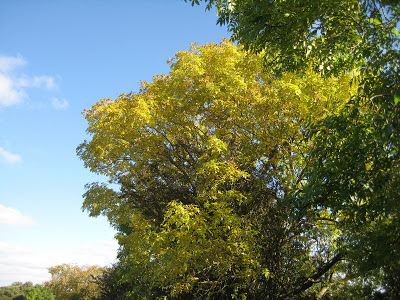 songs were so close together as they have all established their winter territories. So I indulged myself - sentiments of the country - and I don't regret a minute of it. I was still home in time to take the casserole out of the oven for lunch. Now the sky has clouded over and rain is forecast, but I have plenty of countryside memories and scenes to draw on for a day or two. Hope you have too.
Posted by The Weaver of Grass at 08:13

Wallace Stevens said "sentimentality is a failure of feeling". I tend to agree with him. He and we use it to describe a certain sort of emotionalism.

The word used to be used differently (18th C), simply meaning "pertaining to the sentiments/emotions", I think.

I'm reminded of the word "pathetic" and what it used to mean and the way it's currently used - Ian Hislop was going on about it in his Stiff Upper Lip series which I think is really good.

I think a little sentimentality is acceptable as long as we don't lose touch with reality. As for your relishing the delights of autumn - I don't see that as being sentimental but rather as a straightforward appreciation of the delights of nature on a beautiful day. I have been doing the same when the weather allows everything to look it's best.

I A DREADFULLY SENTIENTAL
and I think I love being so

To be able to cry at pet rescue on tv ( I can bawl for Britain) is so therepeutic.....the woes of the world can be expelled in one fell swoop as little fluffy breaths his last infront of a hyperventilating Rolf Harris

I used to be very sentimental in the worst sense of the word when I was younger and really indulged in it to the point of losing myself in sentimentality. I grown wiser and don't do that anymore but I do appreciate the beauty of the world around me if it is present. I think that's what you did.

I am content to be simply sentient these days, but I sometimes weep when I can't remember why or what for.

What a lovely post. How wise you were to take advantage of the opportunity to just sit, and drink in the view. These serendipitous moments are what make life worth living. Enjoy the autumn colours! xoxo

you filled our souls as well. such magick!

Yes, Pat, - a lovely post, as is the previous one. I think that deep appreciation is a better way to describe your emotions, and a feeling of gratefulness, - autumn is such a beautiful season that nevertheless has a tinge of poignancy, and I guess that's where the sentimental part comes in.

My daughter has never been to the U.K and arrives today - I'm happy she'll see the Autumn colours. Perhaps she'll feel a bit sentimental when she travels on to Scotland in the coming weeks - her ancestors migrated to Australia from there in the 1800's.
I do think homesickness is near the top of the list of things that make us sentimental - she has been living away from Australia for over a year now and anxious to get home for Christmas -(another sentiment-laden time of year!)

That sounds like a good book, Pat, and I shall look out for it.

As for being sentimental, I shall put my hand up to that, but what you were doing, taking in that beautiful Autumnal landscape was surely akin to that poem of poet William Henry Davies:

Ian Hislop talked about the word 'sentimental' in the first of his Stiff Upper Lip programmes. It didn't used to mean mawkish - it used to mean capable of feeling.

I'm sure I would sooner be capable than incapable of feelings.

(You can pick up the Ian Hislop thing on the BBC iPlayer if you missed it. Let me know if you need a link to it.)

In fact - here it is:
http://www.bbc.co.uk/iplayer/episode/b01n7r80/Ian_Hislops_Stiff_Upper_Lip_An_Emotional_History_of_Britain_Emergence/

I feel sure that the Stiff Upper Lip has led us into more trouble than the Romantic Movement ever did!

Let us hope the stiff upper lip times are over with. No kisses and no hugs and no showing of feelings allowed. Horrible way to grow up.

Thanks for visiting and leaving a comment - seems we are more or less all agreed.