A Miscellany of things.

How quickly the days fly by.   I have had visitors P and D staying and there has been no chance to put on a blog.   But that doesn't mean that nothing has been happening.

First of all, on Thursday, the farmer went with his niece to a sale of Blue-faced Leicester sheep.   They are not the prettiest of sheep but she loves them.   This morning she has e mailed me a photograph of her favourite in the flock - Nellie Noonah - she says that the photographs shows all she loves about the breed.
I hope I have saved the photograph and I hope that when I have finished this blog I can put it on to the post for you to look at Nellie Noonah.   Time will tell.

On Friday, after my friends came to lunch, we went down to Masham - only a distance of about twelve miles, and home to the Black Sheep Brewery.   We were hoping to go on a tour of the Brewery, but the tour was full.   But we did have a magnificent view of the village and the church sitting amongst the early Autumn colours.   And we did then go into the village to visit the lovely old-fashioned sweet shop which I think is magic.  I always resist the temptation to buy anything but just to look at the lovely colours in enough.

Then on Friday evening we had a meal to gether with Dominic (made out of words...)and his wife.   The six of us had intended to go out for a meal but the logistics of fitting the going out around Dominic's teaching and
the first episode of Strictly Come Dancing proved too complicated, so we ate at home in a relaxed manner.   We had to suffer the stings and arrows of Dominic's scorn that we watched Strictly, but our backs are broad and they went home before the first episode began.

This morning we had a drive into Richmond, a stroll round the shops and the market and a cup of coffee in The Station Coffee House.   Them we ate all the bits left from last night's meal, with the exception of the garlic bread which I threw to the hens - will the eggs taste of garlic I ask?

To end on a funny story - my friends, who are partners, are of different political persuasions.   P, who is Conservative, is very musical and plays in various semi-professional music groups.   One of these groups is a Saxophone Quartet and they were asked to play recently at the local Conservative Association dinner. 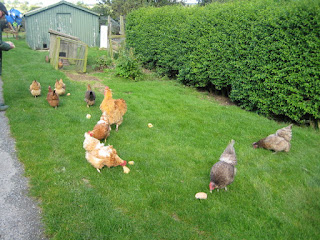 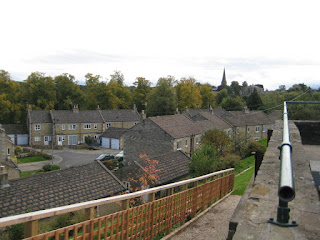 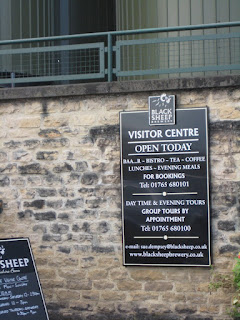 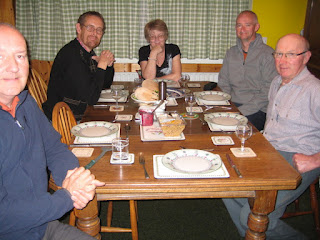 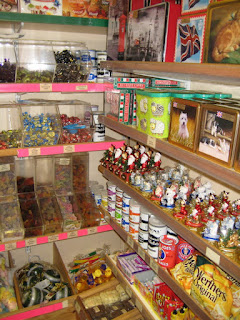 Being a saxophone quartet they dressed accordingly in bright waistcoats and bow ties and they played as the diners were eating, so people were not paying all that much attention.   Afterwards, when they were standing together, without their instruments, chatting about the concert, several Conservative ladies approached with empty glasses, handed them to the group and suggested that they would know what to do with them.   They had been mistaken for the waiters!!! (This confirmed all his partner, D, thought about that particular political persuasion).
Posted by The Weaver of Grass at 07:52

This is all quite funny and has made me smile. Thanks Pat.

The curry smells fab Pat - not finished cooking but looking good! We were over at Leyburn today - love the butchers and bought some more steak following the success of the last lot from there. Saw the Golden Lion and wondered if this is the one you frequent. Jon is loving tootles out in his new van-he loves the traditional harware shops there. Dxx

Lovely post Pat - sons can be so scornful at times! What a treat that sweet shop must be, and I love the story about the Conservative dinner.

Lovely day, lovely visit and funny story.
Now I must look up "Strictly Come Dancing" and wonder about the curry.
Now that I am eliminating all nightshades from my diet Indian cooking is no more for me...I am so crazed over that.

Strictly is harmless and relaxing entertainment. Poo to anyone who gets sniffy about it.

YOUR SOCIAL life puts everyone's to shame..... you are always so busy pat

Thank you for that AJ - I have admonished my son at your suggestion!
Actually - Strictly was lovely and the big girl was so light on her feet that I really think she might win it.