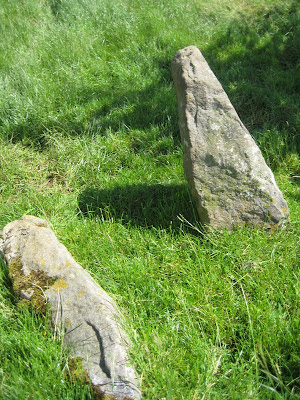 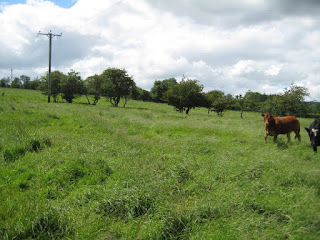 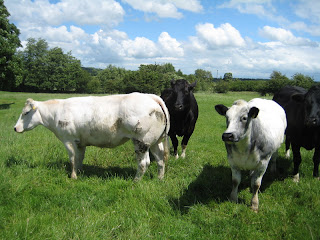 Out walking in the fields after lunch, accompanied by the farmer as I wished
to go through fields full of British Blue heifers who are to say the least 'frisky',
we came across these two stones. Of course I had seen them many times
before as they lie in our barn pasture, but today the farmer and I got talking
about them. It seems that they have laid exactly where they are for as long
as he can remember - that is at least the last sixty-five years. Probably they
have laid there much longer than that.

They are stile markers, blocks of stone which would have been upended when there
was a hedge across the field, to point the way for walkers to get into the next field.
It set me thinking - at what point did people walk the fields entirely for pleasure?
As our land at one time would have been part of the sheep pasture attached to Jervaulx
Abbey, there would have always been monks from the abbey walking back and forth
through the fields; and judging from the axe head we found some years ago, since very
early times men would have been here.

But what I am asking is at what point did walking for pleasure only become part of
our lives? The farmer walks with a group of friends every other Sunday - they take
it in turns to plan the walk.

As a child I walked with my father as often as we could, searching for wild flowers, birds
nests and the like. But I wonder how much further than that it goes back. Yes, John Clare
in the early 19th century and Francis Kilvert in the late 19th century both walked the
fields and wrote about it. But they seemed to be walking from A to B rather than just
a country wander.

I suspect that country people in the old days, most of whom worked the fields by day and worked their gardens by evening in order to have enough food to live on, noticed the wildlife as they worked, but rarely walked just in order to see it.

I hope these old stile stones lie exactly where they are for generations to come. The hedge that they were part of has long disappeared, apart from one or two stunted ancient hawthorn trees. But the stones themselves are a reminder of a past age which has gone for ever.
Posted by The Weaver of Grass at 07:41

Judging by the literature, walking was 18th and 19th century exercise for those removed from the land. Gentry, if I'm using the term properly. We ride too often these days.

I think Joanne's probably right. You don't walk for pleasure if you've already done a lot of miles for work!

What a lovely walk and what interesting thing you have to look at and wonder about.

Probably little time to walk for pleasure for the working classes, but having said that, I am reminded of those who self-educated, and the early botanical societies, members of whom would be weaving with a book propped up on the loom, and then walk for miles on a free afternoon just to search for a specific plant.

Lovely to see those stones have remained untouched (where they fell?) for generations. Here in Wales we have examples of old carved stones (early Christian monuments) which became re-used as gate posts, parts of walls, thresholds etc . . .

The history of your fields and farm fascinate me, Pat, - it would be nice to sit and meditate and feel the aura of all the people who have passed through the years on this same land.

I am fascinated by old stones - the bigger the better - stone circles in particular. I imagine that there was a trackway across your fields which was in regular use all those years ago.
Walking for pleasure must be a comparatively new pastime. Those who worked the land or were on their feet all day and tending a garden in the evening, had probably done all the walking they wanted to by the end of the day.

love the stones!--amazing that they have been there so long--are they recorded anywhere?
Walking for pleasure is often mentioned in the Jane Austen novels.

My dad would take us on nature walks on Sundays here in the US--I still love to do nature wanders and took my children on them too.

I can't quote chapter and verse, but why people started to walk for pleasure makes for interesting history and involves stuff like the emergence of the Lake District as a place to go to and walk, Wordsworth, Thomas Pennant, Daniel Defoe, etc.

That's an interesting question, to a large extent getting from A to B would have been enjoyable but the idea of walking purely for pleasure is probably for most people relatively recent.

Those stones are really interesting

This is my first time visiting your blog. What wonderful photo's. I absolutely love the Yorkshire Moors. I used to live nearby until I married. Loved my hikes/walks on the moors.

I was thinking of Jane Austen references too. Definitely not a pastime of the lower classes at that time.

Back when extended families were all under one roof, may it have been more common than we think for people to walk about just to get some private time, especially young people courting?