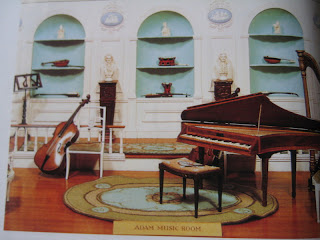 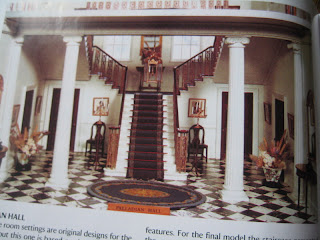 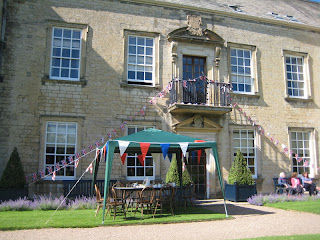 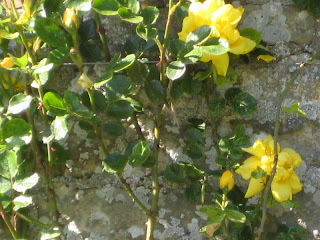 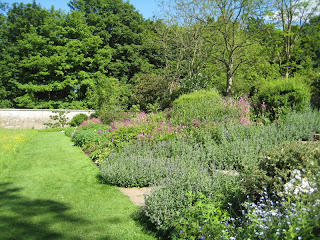 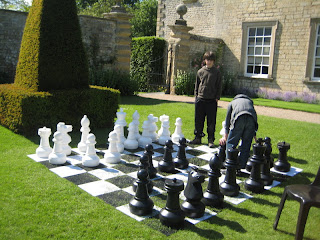 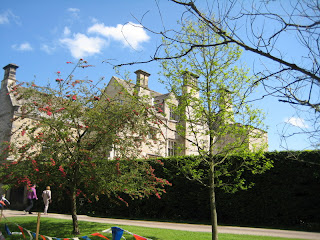 From my last post I think you will agree that we do things rather well as a nation - our organisational skills are rather good and the final effect is polished.

Well, the other area which is done rather well is that of the 'Stately Home', especially if it is in the care of the National Trust. I was a member for many years but when I moved to North Yorkshire I let my membership slide as there didn't seem many properties within striking distance. However, when we decided to spend a week in Northumblerland it seemed sensible to join again.

Now we have returned home we have been looking at properties within striking distance and on Monday afternoon we drove over to Nunnington Hall near Helmsley, on the edge of the North York Moors. It was a miserable afternoon here and very cold, but over there the sun was out and as the whole place is enclosed within a high wall it was warm and sheltered - a Summer's day in fact.

The gardens are a delight. There is a giant chess board, a giant draughts board, plenty of gazebos to sit under for a cup of tea, a delightful cafe with the best cakes I have seen for a long time (and all home-baked). The roses were just coming into bloom and the parts which have been left as meadow for the bees are just ready for cutting.

Inside is interesting. There has been a house on this site since 1249. The present house really
evokes a feeling of the time between the two great wars - maybe the 1920's when it was a much-loved family home. In the house itself many of the rooms looked as though somebody had just left to go to another room.

The highlight for me was the Carlisle Collection of Miniature Rooms on the top floor. The collection was amassed by Mrs FM Carlisle over a period of forty years. She died in 1979 and left her collection to the National Trust. It was later transferred here. I have taken a couple of photographs to show you.

The miniatures came from three different sources. Firstly some were probably made by furniture makers as traveller's samples - a popular thing of its day; secondly Mrs Carlisle sought out skilled craftsmen and commissioned them to make pieces for her; thirdly some were given to her by family and friends who knew that this was her all-consuming passion. The two you can see in my photographs are The Palladian Hall and Staircase and The Music Room. All the petit point was done by Mrs Carlisle herself. I would say that the whole was her life's work really - and what a legacy to leave for the nation. I was totally charmed by it and I challenge you to look at them and realise that they are miniatures - they look just like the real thing (until you see them, when each would stand on top of a table.)
Posted by The Weaver of Grass at 06:56

I'm always "up" for some giant chess..... looks a great little place - the pictures of the tiny rooms had me fooled at first glance - very intricate indeed!

I used to go to Nunnington with my dad. It's a lovely place.

I don't know why you got the same thing twice there...... sorry.

I've never heard of Nunnington Hall, but it looks like a lovely place to spend a summer afternoon. Glad you enjoyed it.

What a wonderful place to visit - your photos are beautiful and enhanced by the fine weather. Those miniature room settings are exquisite and I love the giant chess set.

Beautiful miniatures, Pat, - it must have been a lovely visit.

Great, isn't it? It's a good job the tearoom's full-size.

Wow! Some chess board. Lovely.

If you care to, I'd really like you to see my Hawaii 'take' on the Jubilee in my Weds post.
Your posts always make me feel I've visited someplace interesting and most enjoyable. Thank you

Until I enlarged them and spotted the signs, those miniature rooms had me fooled!

I've been a member of the National Trust for years too but, earlier this year, I had a letter from them saying they were sorry I had cancelled my membership etc etc. I must chase it up. I'd done no such thing!

It sounds like you had a wonderful visit to Nunnington Hall - and which of the homemade cakes did you choose? :)

It seems that after WWI quite a few stately homes fell out of private hands so you're probably right about the decor. The shot of the piano with the coloured built-in shelving is gorgeous!

My dad's ashes were scattered beneath an ancient oak tree in a National Trust woodland area. He was a lifelong member and very proud of the NT membership sticker on his car. I don't think they have a place he didn't go to.

With reference to Dominic's comment, it seems to me that he chooses places for their tea rooms!!

In answer to Tanya's question we had a piece of carrot cake with cream cheese and walnut topping and a piece of Victoria sandwich cake stuffed with gooseberry and elderflower butter cream and we cut them in half and shared them.