It's all over bar the shouting. 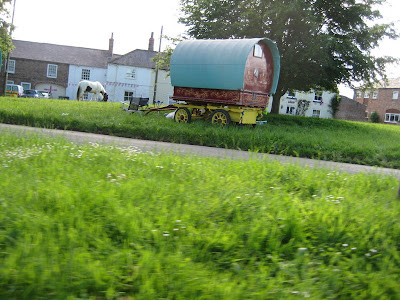 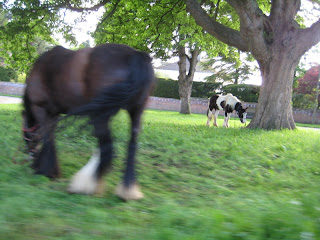 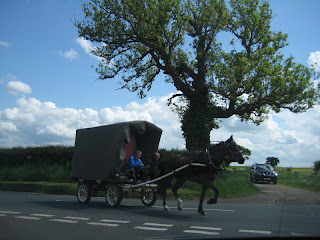 Well, that's the three days of celebration over and I must say it was all very well done. I have been feeling a bit under the weather, the weather has been cold and damp and I have watched much of the coverage of the Diamond Jubilee on the television.

First the Pageant. Stephen Fry, writing in the Times, said he found it 'mind-numbingly boring' and I must say that I was disappointed after the build-up it got. The poor Queen and the Duke of Edinburgh stood throughout. It was cold everywhere but I am sure it was colder on the water, as it always is. I like to think that when HM popped below it was for a quick tot of whisky to warm her up. I do think it went on far too long but - stalwart that she is - she stayed the course.

The concert last night was tremendous. I am not a pop fan and because I have quite a severe hearing loss, my hearing of music is badly distorted. But nevertheless, I enjoyed the spectacle and thought the organisation and continuity were tremendous.

Today's service, parade and appearance on the balcony for the flypast was so British it brought tears to one's eyes. All in all a splendid weekend of celebration.

I am not particularly a Royalist - but when I think of the alternatives then I think on balance I prefer things as they are. Judging by the crowds (almost half a million in London I think) most people think the same. There was a tiny anti-royal protest - but it was tiny. If the percentages are anything like the two crowds then royality are safe for a long time to come.

As one would expect, the Queen bore it all stoicly. So did the Duke, but sadly he went down with a bladder infection and I am sure that would not be helped by the chilly wind on the water on Sunday.

So - back to normality. Once again the Appleby Horse Fair has come round. It happens once a year; the travelling community all congregate in Appleby in Cumbria to buy and sell horses. It is a spectacular occasion and the farmer and I mean to go every year and never actually manage it (the thought of parking puts us off I think). But it is interesting here in the Dales too because many of the gypsy caravans pulled by these strong little horses make their way through the Dales on the minor roads. They are already well on the way and when I was out and about I took a few photographs for you.

They tend to congregate on village greens overnight. They cook food on fires and their horses eat the grass and keep the greens short. Next morning they move on, one step nearer to their destination. Enjoy the photographs.
Posted by The Weaver of Grass at 08:37

Like you, I've mainly watched the celebrations via the telly. I did enjoy most of the concert and the service this morning was superb.
I only caught the last 30 minutes of the Pageant, but it looked rather cold and miserable. I thought that someone should have offered Her Majesty a cup of hot tea (and maybe a patio heater or two)!

Pat...thankyou for the post about the celebrations. We had a double as it was Ben's40th...son...but I as an Irish woman...was really moved by a lot of it.The theatre and drama of it was superb...and I have to say that as he has got older I find Stephen Fry rather boring. I like satire..I think his cynicism just pulls people down...my opinion and I'm sure not everyones!

Lovely photographs Pat - aren't the painted caravans beautiful? We saw a similar one among plainer ones and several horses on a grass verge between Gloucester and Ledbury last week.
I am amazed by the Queen's stamina and was worried it might all be a bit too much for her. It was all very spectacular.
Hope you are feeling better.

I tried to find some televised pieces
and missed all but the concert!
I do admire the royal family and enjoy the public forums although they would be very tiring! thanks.

I echo your sentiments exactly.
I think the Queen really is an excellent role model for people who need to learn to be gracious and patient.
I felt rather proud to be English!

I'm told that I was born on the day of the Queen's first official appearance after her coronation - Trooping The Colour, 1953 - it rained all day then too. Watching the royal family getting wet and cold is what being British is all about; remember how we all sat up and paid attention when Princess Anne used to tackle those water-jumps. Stephen Fry is just sulking because he couldn't get a ringside seat.

I caught Dawn watching the "pop" concert on the red button last night and to be fair the Cliff Richard section had us all wishing for some sort of hearing failure - I settled for the "mute" button!!

I love how accepting you are of the "travellers" on their way to Appleby - not many people view the travellers and the fair as matter of factly and romantically as you do!! Well done!!

Hope you are feeling better now, Pat. I have yet to see the concert, which will be on our T.V. tonight, and of course not the Thanksgiving Service. I am sure that Elizabeth missed Phillip sorely at that service, especially. She is such a splendid person - I have nothing but admiration for her dedication to and love of 'her people'..

The little I saw on TV, I thought was really wonderful.
I think the all the people walking to see the Queen today after the Service was the best part. People everywhere and in such a great mood.
The fly over was outstanding but the older planes flying over from the war was especially touching.

I love the caravans and always wanted one in my backyard for a studio.
The horses are so sweet and very helpful.

All I could think was you know how put on a show and most of all
What a Fabulous Queen you have.

Wow, I thought those type of caravans being pulled by horses were a thing of the past.

The Queen went for a sit down as shown on the coverage I was watching. My mother at 84 (she didn't make 86) couldn't have managed any of it. I thought it was a wonderful day and now we have all the horrible newspaper and radio people pulling it to pieces. I turned on Radio 4 yesterday morning and a panel in the studio were dissecting it bit by bit, all nasty stuff and 'indigenous' came up three times in two minutes, (I am not sure if we are or we aren't, too big a word for me at least first thing in the morning, but whatever it was we were adjudged to be wrong). I thought why don't they go home and do something useful. I turned off. It would be nice if we could enjoy something for a change without knocking it. The concert was great and Paul McCartney excelled himself. If we can do this the Olympic Games opening ceremony should be really something.

How romantic is the life of gypsies. At least that 's what it looks like.
I also watch the "Diamond Queen" jubilee. And I admired the Queen . She was smilingball the time, but in the end she looked exhausted.
Good post, Pat! Have a great weekend.

Sorry. There were three the same comments!