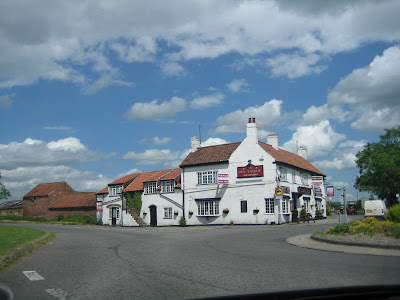 When we went to Nunnington Hall on Monday, I couldn't resist taking this shot of the Busby Stoop
Inn, which is just outside the little town of Thirsk. This inn is very famous around these parts by virtue of the fact that it is said to be haunted.

The inn takes its name from one, Thomas Busby, who in 1702 was hanged for the murder of his father-in-law; and what is more he was hanged just across the way on a gibbet specially constructed.

He was sitting in his favourite chair slumped in a drunken stupor when he was dragged across the road and hanged. As he left the room he cursed his chair and said that anyone who sat in it would soon die.

Apparently there were deaths and now - to eliminate the risk - the chair has been removed and sits in Thirsk museum where it is safe from bottoms who are tempted. It is said that among those who have died as a result of sitting in it are:-

an RAF pilot during the war.
a motorist in a car crash.
a motor cyclist.
a hitch hiker.
a local who had a heart attack.

Whether you believe it or not is up to you but, frankly, nothing would have persuaded me to sit in that chair. And furthermore, I would not care to walk past there on my own at the dead of night. Make of it what you will.
Posted by The Weaver of Grass at 07:04

I bet the legend brings the visitors in inspite of, or maybe because of, it's grim content. It looks very attractive and is very well placed at the crossroads there. I wouldn't have sat in that chair either.

I wouldn't sit in the chair either!

How funny... but I don't think I would sit in the chair either.
What a lovely looking Inn.

I believe in paying attention to the hairs on the back of one's neck!

I love these stories about haunted buildings. There seem to be a lot of them in Great Britain. All those gothic stories are fascinating.

This makes my arms all tingly (why not the back of my neck??) I'm glad the chair is safely stored away from unsuspecting sitters.

Bring the chair around. I'll sit in it for charity.

sounds like the "Busby Stoop" is just what modern parenting requires....

If your child is bad, then you must sit them upon the naughty step.....

If your child is REALLY bad then make them sit on the Busby Stoop!!!

It's also an excellent pub (or it used to be. Not been for a few years.)

I think the pilot during the war might have been a fairly safe bet as a candidate for death. Not sure about the others though.

I can only assume that Arctic Fox has recently come across a screaming tantrum in a supermarket aisle.

I like your differing responses. Personally, I think it would be a brave man who sat in the chair - alright so it is a load of rubbish, but then again - you never know - it is not wise to tampt fate methinks.