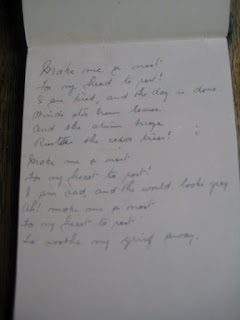 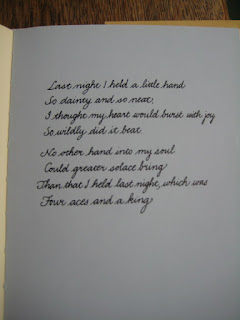 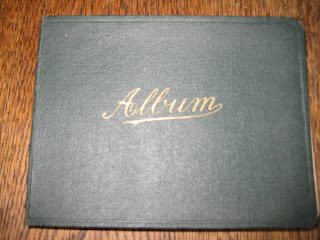 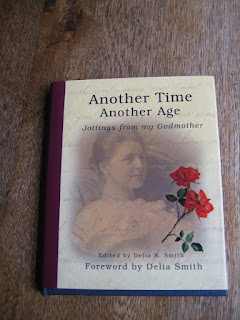 The Editor found these jottings amongst the belongings of her Godmother, Bertha Green, when she died aged 98. They were in small albums which in those days I think were called 'Autograph Albums'. I have just such an album which belonged to an Aunt of mine who died in 1954.

She belonged to that generation of women who never found a husband after the terrible loss of young men in the first world war. The album begins during that war, when I know she had a relationship with a young officer in the army. The relationship ended disastrously when she found out that he was already married and from that date on there are no entries in the album. It is really a testament to a very sad life. In the back of the album a newspaper cutting is folded. It is a poem headed 'Consolation' and of course one wonders - did he send it to her after the relationship ended or did she find it in the newspaper and cut it out and keep it for consolation?

When we think of autograph albums these days we think of collections of signatures which often turn up on programmes like Antiques Road Show, where someone has collected the Beatles and so on. But when I was young we kept Autograph Albums and asked everyone to write in them. What resulted was a collection of verses and bon mots. And this is what this little book contains.

It is a delight to read. And what strikes me also is that all the handwriting is very similar. The same is true of my aunt's album. In those days it seems, if you could write, then you were all taught to write with virtually the same hand. I remember my mother encouraging me to write rows of what she called 'pot hooks' long before I started school - presumably that is what they did in school in those days to get all handwriting the same. (I find many of my American friends now write in a similar hand - do they learn a particular script in schools there?)

I particularly love this little one from the book. It was added by someone called H Busby on February 27th 1916:

In the rainstorms of life
We need an umbrella.
May yours be upheld
by a handsome young fella' My sentiments exactly.

I don't suppose the book is still in print - it was printed and sold in aid of the Shaftesbury Society
- a society which enables people in great need to achieve security, self worth and significance. It
is a registered charity - 221948.
Posted by The Weaver of Grass at 05:40

What a delightful post Pat. I had an autograph album - I wonder what happened to it.
Two of my great aunts lost fiances in the First World War and never married. I don't recall them ever speaking of it.
Your charming book sounds just the thing for dipping into until this dreary weather decides to improve.

My mother had an album signed by her high school classmates. She graduated high school in 1936. She also had a scrapbook with advertising snips and cartoons--Katzenjammer Kids, stuff like that. Because of the old advertising logos I sold the scrapbook for a fair sum. Mothers tried to interest us in albums, but they languished in my day.

My grandmother bought me an umbrella for my 18th birthday. Apparently she had met her husband when he offered to walk her home beneath his umbrella. It didn't work for me!

Yes, I had an autograph book, and now I also have my mother's. Both are filled with sweet little verses and the odd, more personal, sentiment. You're right about the handwriting - there's a striking similarity in each book.

I have an autograph album from high school with little verses written by classmates. Every so often I reread them and smile at the memories.

Perfect handwriting will soon disappear with the use of digital communication. I found that students mostly preferred to print in my last few years of teaching even though they had been taught script.

What a treasure! You must be very pleased to have it.

Oh what a sad story about your Aunt. My Mother's best friend was engaged but her Fiancé went to war and didn't return. She never married either.

We used to have albums where friends and relatives would write things for you though I haven't one now; as you say, writing was glorious then. I heard recently that in some states in USA children are not taught to write cursive script at all - I was horrified, how would they even sign a document?

The "maiden aunt" was very common, I had two who never married, possibly because of WW1.
I remember as a child, having an autograph book in which a friend wrote- "When you get married and have twins, don't come to me for safety pins!"
Although they have gone out of fashion the wedding guest book is becoming popular. I am in the middle of making one for my Goddaughter.

It seems that maiden aunts and autograph books just belong together. I have two that belonged to my father's sister who never married, although my mother knitted her a beautiful pink negligee that she kept in her Hope Chest. Alas, her fiance turned out to be a rascal! Her nephews and nieces adored her and there was another man who adored her too, but she didn't marry him. Many of the verses are quite poignant - they belong to the period just after the first world war.

All the ladies in my family..... my two aunties and my mum.... my cousin Jo and my sister...... they all have extremely similar handwriting to a noticeable extent.... different schools, countries and upbringings..... my writing is simply summed up in three words..... spider-drunken-inkwell!

Your autograph book post brought back primary school memories for me. We had placed, in our Yr 7 class a young Polish immigrant woman of 16 who had no English language at all.Surrounded by younger children, she spent most of her time in tears. Things are so different for our immigrants and refugees now. Apologizing, she wrote in all our autograph books in Polish - we thought it unique and wonderful! I still think of her and wonder if she is still in Australia - she'd be aged in her 60's now!

I have my late aunt`s journal, from her schooldays between the wars. A beautiful little book of quotations and passages from her favourite poetry. I`m so pleased that it was found and saved from among her papers and possessions.

So wrote a school friend in my autograph book in about 1962. I ended up not having any children!

thanks for sharing it

I had an autograph book or two when I was at school and I remember both the verses quoted above being written in them. We all tried very hard to think up some more erudite quote than any of our friends! Some of the more gifted artists painted pages in them as well. I have no idea what happened to mine. We had to learn 'copybook writing' at school, and could pick which state a person lived in by the writing style. It is all very different now. Cheers

I can remember having an autograph book too, and forging Charlie Drake's signature (it fooled no-one!!!) My dad did a little drawing of a chimney and wrote beside it "My sign - Smokey" - Smokey was one of our cats.

Yes, maiden aunts and autograph books and knitted gifts at Christmas and crochet doilies. A whole generation of women who lost their man and their opportunity to marry. How different life is now. They would have thrown up their hands in horror at the notion of deliberately raising a family and NOT marrying!

I still have my autograph book from school, even the boys signed them. Lovely post, thanks for sharing :)Mo

wow this is great...