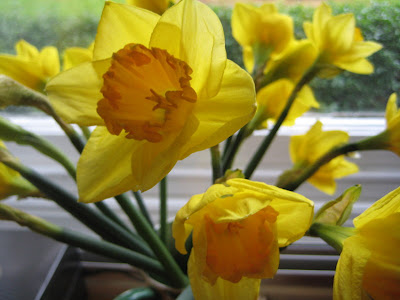 First of all, feast your eyes on the daffodils above. A friend bought them for me on Friday morning as a thank-you for inviting her to a meal a couple of days earlier (thank you W). There was no need of course - we invite her because we love her company, but she knows how daffodils make my heart soar this time of year and they certainly have done. They are quite slow to open up and I look at them dozens of times each day. They prompt me to quote those first four lines:

I wandered, lonely as a cloud
that floats on high o'er dales and hills;
when all at once I saw a cloud -
a host of golden daffodils.

I know they have been quoted so many times that they are almost hackneyed - but I still love them. The Lakes is not so far from here and Wordsworth tramped the hills and wrote most of his best poetry there.

Still on the subject of friendships - we are off out to tea today to another friend met through my blog. She does not have a blog herself but she has read mine ever since she and her husband decided to move into the Yorkshire Dales. We have found several interests in common and enjoy one another's company. Yet another example of how blogging enriches one's life.

Now to topic number two - one which I found so interesting in yesterday's Guardian newspaper.
Oliver Burkeman suggests (he got the idea from Glen Whitman, an economist) that for every subject there are really only two things you have to know. The rest is really only an application of one or the other of those principles. Whitman now has a website devoted to the Two Things Principle - it is at bit.ly/the2things - and there are one or two suggestions in the article. For example the two things about going into acting are - don't forget your lines and don't run into the set. Someone suggested on Whitman's site that as far as parenting was concerned it could be broken down into - there's no such thing as too much affection and it's not what you say it's what you do. I was talking to Dominic last evening about it and he suggested that for music it was probably - look at the key signature and remember to count (or something like that - if I am wrong he will probably correct me). I thought about the two Principles of a happy marriage and thought they would probably be - give one another plenty of space and never let the sun go down on a quarrel. I would love to hear your two principle ideas. For example, can you break down gardening into two principles? Whitman suggests that you always can, with any subject.

Whatever you are doing today enjoy your Sunday.
Posted by The Weaver of Grass at 00:54

Apparently Wordsworth originally wrote, "I wander lonely as a cow..." but his sister disapproved so he changed it.

The two principles of gardening? Dig and weed.

I love daffodils too, we have a lot of the miniature ones coming up at the moment around Edinburgh

It is rarely, almost never, that one sees a lonely cloud. When was the last time anyone saw a single lonely cloud in the sky in England? And anyway if there was such a cloud it most likely wouldn't be wandering it would probably be going straight line. It would probably also gently fade away . . .

Thankyou for sharing your lovely daffodils with us - I love them too and are watching buds fatten on the ones planted on the roadsides by our local council.
Two things for gardening - feed the soil and get rid of pests. I am including weeds as pests.

I, too, have daffodils opening in a vase by my desk. I love watching them bloom from tight buds -- at the moment they are half-way there and make Spring really seem like it's just around the corner.

Nice blog -- came over from Tom -- like your sense of humour!

Thanks to everyone. Hope we get more of the two principles. Love the idea of Wordworth saying lonely as a cow - not sure if Gwil is pulling our legs or not though.

I think Gwil's comment is brilliant! My favorite poet is Wordsworth and of course I've known the poem for centuries, but I've NEVER heard anyone question a cloud being lonely. That's really thinking outside of the box and it also makes me realize that a lot of poetry is poetry because it sounds good and is not necessarily logical.

Here's my happy marriage one:
1. You do the washing
2. He does the ironing.

Daffodils are lovely, Pat - I'll bet your friend's company was pleasurable too.

Gardening - 'Talk nicely to the plants' and 'Don't scream when you see a spider' :p

We were in Ambleside yesterday and the Charlotte Mason driveway is lined with a myriad of daffodil shoots. It is going to be a spectacular show when they bloom! (I bet I won't be back at the right time. Shame.)

Gardening....have a good spade and pull out the weeds!!

Just noticed someone got there before me...