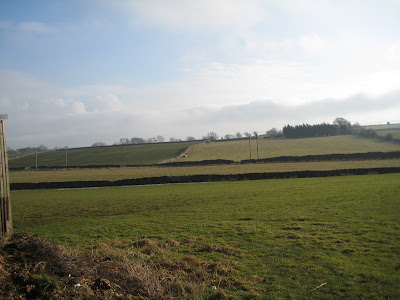 Leaning on a field gate, contemplating - as the sun gradually turns into freezing fog which gets into the bones - and looking at the walls around the fields I thought of how long those walls had been there and wondered what story they would have to tell if they could talk.

They will have seen generations of hard-working men (and women) tilling the land and looking after the animals - this has always been grassland, apart from the war years when some crops were grown - through all weathers and through primitive tools up to the present day labour-saving tools.

Do you remember that old childrens' riddle? Why should you never tell secrets in the countryside? Because potatoes have eyes, corn has ears and beanstalk! That popped into my mind as I looked. And then I thought of the splendid programme last night on HM the Queen and the beginning of her Diamond Jubillee celebrations.

I know that some of the people who read this blog are not royalists - and I respect their opinion. But I really defy anyone not to be full of admiration at the total dedication and mental and physical discipline which the Queen has put into doing what she considers to be her duty.

And then there was the old footage of previous Kings - I think that probably my earliest memory is of the Silver Jubilee of King George Fifth and of going to a Fair in Lincoln, which is my home-town, and remembering my brother winning me a red, white and blue rag doll on the roll-a-penny stall. I think that I remember it, but then memory is a funny thing and it could be that others have just told me the story.

Going further back, my father could remember seeing his first motor car, complete with a man with a flag walking in front of it. And he used to talk of the streets with no lighting other than the lamps which were lit each night. And that reminded me of the lovely TS Eliot Prelude with the lines, which if my memory serves me right go something like:

The lonely cab horse steams and stamps.
And then the lighting of the lamps.
(If I am misquoting, someone will no doubt point it out to me).

Imagine the smell - of lamps and of horse - and add that to the 'smell of steaks in passageways' earlier in the poem. How evocative smells are.

I was once in Poets' Corner in Westminster Abbey on TS Eliot's birthday and, while we were there, his widow (who I think was called Valerie) came and laid a bunch of violets on his grave.

Ah, what tricks memory plays on us. Some of the above may be right and some may be wrong. One thing I know for sure - no violets out yet here as that freezing fog closes in and the temperature falls for another bitterly cold night.
Posted by The Weaver of Grass at 07:12

A wonderful evocation of how memories come in and out of focus -- try asking four people about the same event.... and see what different responses you get.
Yes, I'm full of admiration for the Queen's dedication and hard work. I'm rather left wing but how much better a constitutional monarchy than almost anything else.
At least the Queen knows how to behave!

A lovely, evocative post, Pat. Ideologically I'm a Republican, but sentimentally I'm a Royalist. I have huge respect for the Queen.

I remember the lamp-lighter coming around my Welsh village to light the gas lamps. I hadn't thought of that for years, thank you for the memory nudge.

Wonderful post today.
I often think about what stories the land could tell.

The Queen is truly remarkable and an example to us all. I enjoyed that programme immensely.
My father also, remembered the first motorcar driving through the town with the man in front with a red flag.
I was only one at the time of George V1's coronation so have no memories of that but do remember our Queen's - the whole family crowded round Granny's tiny 9" TV screen with the curtains closed for what seemed like the entire day!

What a lovely post. I'm a Royalist, and I wouldn't have the Queen's "job" for all the tea in china. Your day is never your own.

As for the memories - there is a photo of me (about 3) with my grandad, and I really couldn't say now if I can really remember standing beside him or it's my picture in the photo I recall. . .

A rich post, Pat, with much to think about. What a treasure chest of memories you have!

Wonderful post. Lots to think about, I was at a garden party for a very young, new Queen on I think her first visit to Australia and being presented to her. I know I missed school.I must look and see if I still have the photo the paper took, I was with my parents and Sir Douglas Mawson of
antarctic fame. He and my father were Professors at the Univesity here.
Now are my memories correct? I think so.

If your dry stone "walls have ears", what stories they would have to tell of the past custodians of your land.

My late Mum remembered her grandfather, who was a master builder, having the first car in their north Lincolnshire village. It caused a great stir.

The Queen certainly has done an amazing job.

Likely, I will never feel the reverence of Poets Corner, or experience the winter in your ancient farm country. funny, just today I looked at your 'header' and wondered at the Roman face of old Britain. . . you have shard with us the very powerful 'smell' of this moment in your part of the world. Your careful, thoughtful words about Her Majesty, and her carrying out of her work over decades, resonated with me. She has been a constant throughout my life. . . Such a rich post, that historians and sociologists at Cambridge and Harvard (and perhaps Shanghai) will consider these words of yours today to be a rich 'primary source' - as is your memory of your Da's words about horses. . . and lamplighters. . . My world is richer, because I came here today. Thank You

I remember reading somewhere - though my memory could be playing tricks too - that many of the walls in Yorkshire were built after the land was grabbed from cottagers who were eking out a meagre living from tiny plots of land. And who did they employ to build the walls? none other than those they'd just evicted. My father always used to tell us that The Queen had a wonderful memory: when he was a boy he'd waved to the young Princess Elizabeth, then, 60 years later she passed the same way again and she recognised him. Well, she waved!

I was thinking along these lines yesterday- of the things the trees could tell us, just imagine what they have seen over time, What memories.

Thanks for the joke! Must try and remember it.


When I think of the Queen there are two things that come immediately to mind. The street party we had when she was crowned. There was red white and blue bunting. All the kids in the street were there. It must have been good weather. I remember eating red jelly. I suppose we also had Corona pop and biscuits. Wales didn't have its own 'official' flag at that time. It wasn't allowed. We lived in a kind of vacuum. Welsh was banned. We kids had to learn the German Queen's English.
The other memory that I always get is the TV images of The Great Fire of Windsor. And the phrase "Andrew was so brave." sticks in my mind. Apparently Andrew, or Helicopter Andy (previously known as Air Miles Andy) had rescued some paintings.

Please excuse my lack of enthusiasm for the Saxe-Coburg-Gothas. I cried when Diana was killed. And I thought the Queen's reaction could have been a bit kinder.

Still 'my Queen' although I've been gone from England for so long. I so respect her for a job well done, and a hard job too. Her stamina is amazing, has her late dear mum's genes I think.

Lovely memories Pat - thanks for sharing and reminding me of times long gone in our beautiful country.

What a lovely post. I was at boarding school when the queen was crowned and we were allowed to sit up for most of the night to listen to the ceremony on Radio Australia - wrapped in blankets and doonas (or eiderdowns as they were called then). The Queen and Prince Philip visited Australia the next year and we travelled by train to another city about two hours north, leaving soon after 5am, then being marched through the streets to a sister boarding school for breakfast. About 5000 school children assembled in the showgrounds. We were so thrilled that the Queen stopped right in front of us,to change from a car to standing in the back of a jeep. She looked so very tiny. A long time ago, but a wonderful memory.