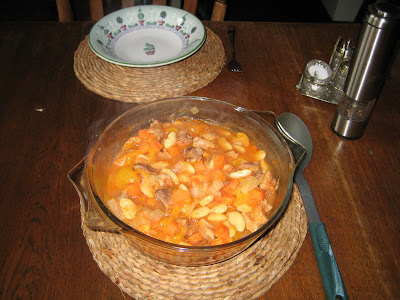 Now how's that for a headline?

First of all thank you to all who commented on my post on ivy -either on my blog or by e mail. It seems there is an awful lot of folklore surrounding ivy. As Tom says - it keeps witches away. As I was born on Hallowe'en and have always considered myself to be a bit of a witch (albeit a good one) I am not sure how to take that. But my friend, W, also points out that it flowers when there is not much pollen about, so it is a good source for the bees. Also, as it is evergreen and quite thickly spread, it does provide good cover for little birds on cold nights.

Now to the pork. As you will know if you have read my last few posts, the Aga is off awaiting a spare part and this means that my means of cooking is limited. I have an electric hob, but also a combination microwave which I have only used for microwaving things. So yesterday I got to grips with it and cooked a pork and apricot casserole on something called Combi 1. You will see the photograph above. I thought marks wise I would give it about five out of ten; the farmer gave it eight out of ten but I think he was probably being kind.

The main reason I scored it so low was nothing to do with the cooking, but to do with the taste of the pork. We rarely eat pork because each time we eat it I get the same flavour - and this applies to bacon too. I can only describe it as a faint taste of pig's urine (sorry about that). The farmer says this is because European law now forbids farmers and pig rearers to castrate boar pigs.

Now, admittedly, listening to him tell me how they used to castrate boar piglets is very barbaric and I agree it should not continue to be done in that way. But is it only me who gets this taste? I don't taste it in ham, but then I rarely cook a joint of ham myself unless for a large gathering. I find it cheaper to buy ham already sliced and from a good deli - and it tastes and smells delicious.

So, has anyone anything to add to this? Does anybody else notice the smell and the faint taste in present day pork? Does anyone know anything about this ruling? Maybe John is a good one to ask as he has just sent two pigs for slaughter. Were they gilts or boars John - I would very much like to know. And does the meat you have so far received from the abattoir smell of anything other than pig, please?
Posted by The Weaver of Grass at 00:55

Your pork casserole looked delicious Pat - what a shame your taste buds didn't enjoy it as much as the farmer. I think I know what you mean regarding the flavour. I find that if roasted or grilled thoroughly that slight taint is not there. I did a pork and apple casserole the other day and added a little cider - that helped. More herbs and booze perhaps?!! Everything will taste better when the Aga is mended.

When I cook a pork casserole, I always make sure to add a few drops of pig-urine to the mix in the last few minutes, Weaver, so that the taste doesn't steam away. You can't beat it.

No real thoughts on the pork which is probably different in the US.
Italy is pork bliss....

I love the name Ivy.
Unfortunately there is a new celebrity babe called Blue Ivy out there.

Do hope the Aga is revived in a timely way!

am cooking our first huge chops tomorrow will let you know!!!

we sent one gilt and a boar to slaughter

How do you know what pigs urine tastes like?

Our coldest night/morning - hey, it actually feels just like Winter at last.! The fox is roaming the garden, the finches are chirping and sitting on the front porch in brilliant sunshine - it's a lovely Sunday. Hope your day is good too.

Hi :)
What you're talking about is known as 'Boar Taint' - and there are lots of opinions about it. There's a page about it on Wikipedia.
We have only raised Gilts, it'll be interesting to hear how John's Boar tastes.

My father, who was a pigman on an intensive pig farm always said that the meat became tainted by pigs lying around in dirty conditions, ie their own muck. The taste was present back in the days when we castrated pigs too. In those days when I worked on the farm all food scored 10 out of 10!

I don't think it is the taste so much as the smell which is a bit off-putting. Heather's idea of herbs and booze is a good one - and I shall be interested to see if John's gilt and boar taste any different from one another. Thanks for contributing.

I think i'd rather not eat meat than to have a piglet castrated. My daughter is a vegetarian.
Thanks, Pat, for your visit . The big race is off and I 'll write about it tomorrow! The Friesians say:it giet net oan....these day we heard a lot of Friesian spoken on TV. So I also picked up a few words of their language.
Good luck with the Aga!

Well, it does look good but does not sound too good to me.

I understand what you mean. Sometimes the pork has a strange flavor, not sure I would would call it urine... I always think it musty. But I don't live on a farm so what do I know ?

The best pork I have had was when I was in Japan. Don't know why just tastes really fresh ?

As for the Ivy... i like it but it can do such damage when it starts growing on the house. When I lived in Laguna Beach when we saw a home with lots of Ivy (large leaves) we always knew they had rats...big rats.. shudder !
In Tucson I don't have to worry about it, too hot plus something will eat it !