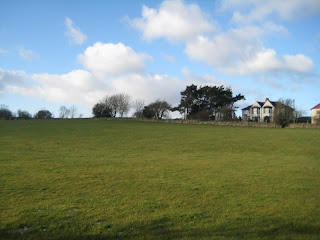 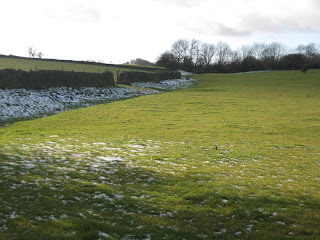 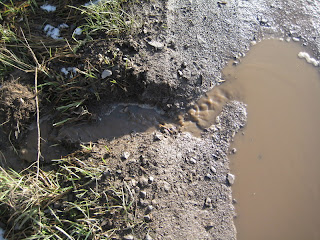 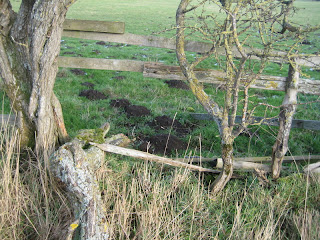 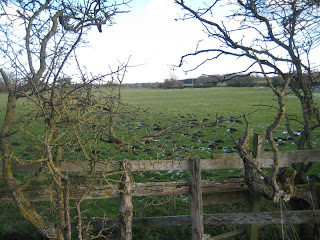 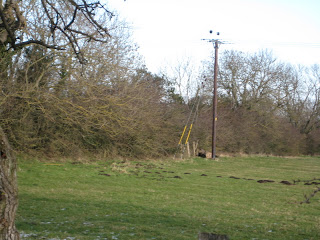 But not quite gone. The snow is going quite quickly here in the Yorkshire Dales. Where the sun catches the grass it has already gone, but it is hanging about in the shadow of the hedges and walls. The farmhouse basks in the sunshine and the temperature is five degrees. Were it not for the snow lying here and there on the ground you could be forgiven for thinking that Spring was on its way. Then you turn on the news and hear of massive pile ups in the ice on the A1 road, with enormous tail-backs for miles.

Now the the sun has melted the snow in the fields it has revealed a plethora of mole hills. What a fascinating little creature the mole is, with his fur like dark brown velvet, his enormous front feet, fashioned for some serious digging and his tiny eyes, which make him almost blind.

Loved by some and hated by others, he is always going to have a struggle to survive. There was a time when moles, along with carrion crows, rats and stoats and weasels were killed by gamekeepers and their deaths advertised by being strung together on wire fencing in a most macabre way. This practice seems to have died out mostly now, thank goodness, but most farmers hate the mole. For a start he digs up vast quantities of grassland and if the tractor drives over the molehills they are flattened and stop the grass growing; if the molehills are gathered up in the silage then the soil causes the grass to go mouldy.

Moles are loved by all who search the fields for artefacts from a bygone age. It is said that things are often found in this soil which of course comes up for the depths. Gardeners too treasure the fine loam which makes marvellous potting compost.

What a pity we can't all live in harmony together. I love the mole. We often find one dead but rarely a live one above ground. In a few weeks time the farmer will set his mole traps in an effort to keep the population down somewhat. Luckily, he never catches them all and before long those tell-tale heaps will begin to appear again.

On our afternoon walk it amused me to find that, walking down our neighbours lane, I found he had dug little runnels from the enormous potholes full of water, so that the water drained off onto the grass verges. I did wonder whether it would have been better to fill the pot holes with stone chippings before the snow came, so that he didn't have to do this. But there again, maybe that is too easy for a canny farmer.
Posted by The Weaver of Grass at 07:35

Pat, I've seen rows of moles hanging on barbed wire; but why? It's hardly a deterrent to other moles. And it's hardly proof that the moles were caught were caught in that field - the man could have brought them there in a sack. So what's the idea? Can you ask? Is is just advertising? I've also heard of gas being used. Any truth in that? The reason I ask all these questions is that I knew someone who had moles on their land and did nothing about it and everybody got used to each other. A kind of balance seemingly ruled there.

It is a shame we can't seem to live in harmony with all the other creatures. Never seen a mole, dead or alive, except in pictures, one day, perhaps.

The snow has almost gone here, too, and it's been a glorious day.

Still got the snow here, east of the A1.
I once read that mole catchers would string up the moles in order to advertise how good they were at their jobs.

I once saw just the tip of a mole's nose on a visit to Slimbridge! Beside the path a plant suddenly began to twitch and I stopped to see why. The soil parted and this tiny nose appeared. It sniffed the air and sensed my presence and disappeared just as quickly. I wouldn't want them in our garden but they do look sweet.
If a woman had dug those runnels rather than repair the potholes in the lane, my husband would have said it was 'feminine logic'!!

we have armadillos.....they REALLY dig holes! I have learned to live with them, but it took a while.

I'll swap the rascally VOLES for the moles any day! They have spent the past years devouring so many of my plants and shrubs - even a huge mahonia where one day I noticed it had fallen over - the huge, thick roots had been gnawed right through by those little devils! I won't go into the poor hostas - I cried over them!

Actually though, since the fox family took a liking to our garden and have been breeding here for the past three Springs, the pesky voles seem to have vanished! We are now all trying to live in harmony!

Nature sure tests us doesn't she?

I know that moles are a bit of a menace but they are such sweet little things when you do come across a live one - I am such a softie at heart!

What a difference a day makes!

Nice that you have signs of spring, Pat. Moles are not my favourite creatures, - when Charles planted a wonderful row of curly willow up the driveway few years ago we had to watch so carefully when they were still young and vulnerable that they didn't provide a feast for the moles, - we did catch two or three, and I hope that this spring they will have found the roots not quite so tender. Do you suppose that matters to them?

I had a pair of cats who used to hunt and kill together, never seen it before or since, or and they caught all sorts, they even left biggish birds like magpies as "presents". This is how I saw my first mole, they killed it and left it at the bottome of the stairs as ususal. I was shocked at how small it was. I was about 38. Then, I guess being a townie, and being brought up on wind in the willows I never seriously thought about their size but I always thought they would be about twice the size they were. Those cats killed and left about four or five over the years we lived in that house.

i think that boys love to play with puddles and channels and that that love never leaves them!!!! steven

I can't bear the idea of mole traps. They're so vicious. I've heard that you can drive moles away (from gardens at least) by putting one of those music chips from a birthday or Christmas card down the tunnels. They can't stand the noise and move on elsewhere. I guess you'd need a lot to drive them completely off a farm though.

Doohie seems to answer your question Gwilym. As it no longer seems to happen I can only assume that landowners now have a different view of what gamekeepers should do with their time.

Thank you for all your interesting comments.

We have the mole back again on our lawn. Another new hill appeared today.......

I love the little mole hills! I've given up on grass, too, though!
Cheers from Cottage CountryCanada!