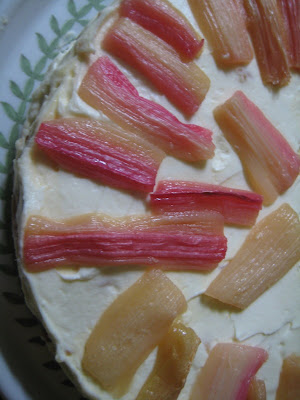 What is nicer than sharing a meal with family and friends? The evening went so well that I am afraid I forgot to take photographs until it was over and everyone had gone home. So I can only tell you about the food apart from one sweet in the photograph.

The day before I made a shepherd's pie and a pheasant casserole - both improve with keeping overnight. It also takes the hard work out of the day of the dinner party. My friends came through the Dales and the Dales were flooded big time. They had great difficulty getting through and kept ringing for alternative route instructions. They arrived at 2pm and because I had made everything in advance I was able to sit and chat all afternoon.

My son and his wife and our friend, W, arrived for 7.30 and I had only had to spend the previous hour in the kitchen. I made a vegetarian dish for my son (sweet potato/apple/sultana with a potato and cheese topping) and a mixed fruit crumble pudding (blueberries, raspberries, apples, plums and gooseberries). I also made a recipe for rhubarb and ginger cheesecake. This had appeared in the Guardian newspaper on Saturday and as our friends are Guardian readers they were quite impressed with the fact that it looked exactly the same as the picture (see above).

Afterwards we sat and chatted, had lots of laughs, played a bit of music and generally relaxed until around ten thirty. What could possibly be better than a night spent with good friends?

~~If the farmer will agree to take a photograph of the fascinator for me, I will post it later in the day.
Posted by The Weaver of Grass at 03:46

The meal and day sounds lovely.
Was the pheasant one of Farmers from the shoot ?
I remember/think you once said you made it for Farmer but you didn't eats it ? or am I remembering this wrong.
How are the chickens ? I miss seeing them.

Your dinner menu sounds delicious - I would think people are queuing up to be invited for a meal chez vous.

Yum! We really must try and pass by your door one day...

Your dinner sounds delightful and your fascinator is so gorgeous. I hope you are going to show us a photo of you all dressed up on the big day! Cheers

I think the worst thing about a fascinator is the word fascinator. However, it looks very nice.