Two in one today! 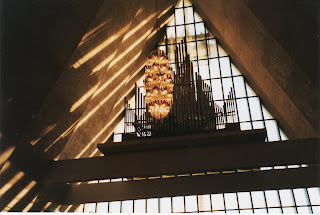 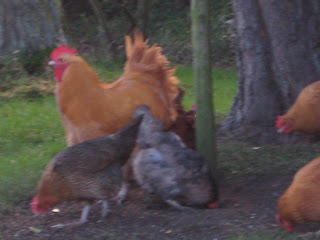 First an up-to-date photograph of my rooster and his entourage - thought you would like to see him. Ever the opportunist (aren't all birds?) (maybe that should have been aren't all men??) he spotted immediately that the farm gate was open to allow our neighbour to collect a load of straw - he was through it like a flash and up to the bird table for a feast on the droppings of niger seed, sunflower hearts and the like. Still, I don't begrudge him his little outing - he is so lovely I could forgive him anything.

Now to today's real topic. It says in today's Yorkshire Post that there is the best chance over the next few weeks of seeing the Northern Lights. Admittedly it says the best chance is in Ireland but there is also a good chance in Scotland and the Northern counties of England. Between now and the equinox in March is the best time for years, so I shall be looking out every clear night. Those of you who live North of the Border (Titus and Rachel and Juliet spring to mind) will have an even better chance.

It is something I have always wished to see. Some years ago the farmer and I went on the Hurtigruten up the Norwegian coast to the Russian border at the time of the midnight sun. The photograph above is of the sun shining into Tromso cathedral at midnight, when it was literally as light as day. The alternative of course is to go in mid-winter, when it never gets properly light - then there is a chance of seeing the Northern lights. Sadly there is also a chance of meeting forty-foot waves in harbours like Batsfjord (where the harbour has been destroyed countless times in mid-winter). As I was seasick in a slight swell going over to the Lofoten Islands then I think I will give mid winter Northern light spotting ideas a miss. But I would dearly love to see them - so shall watch carefully. If anyone is lucky enough to see them please do report it in Blogland.
Posted by The Weaver of Grass at 06:17

I remember seeing them a couple of times, growing up in Canada. Hope you see some!

The photo of the cathedral at midnight is amazing and I hope you get to see the Northern Lights much nearer to home. As for seasickness, I have never really been put to the test, though a Channel crossing in a heavy swell came close.
Your rooster is so handsome and makes a lovely picture with all his wives.

I saw the Northern Lights many, many years ago in Wisconsin (US). Most beautiful thing I truly have ever seen. Shooting rays of purples, blues, greens. I laid on the back of my dad's car and watched for hours. I hope you get to see them.

I've seen northern lights around my cabin in southern Pennsylvania a time or two, not very often. The last time was perhaps 8-10 years ago. The lights looked like a big red powder puff in the north. I've never seen them when I was in Alaska or Canada, where the displays would be more dramatic.

Oooh! Clearest of nights tonight, and a full moon. Is that auspicious? I'll be keeping an eye out Weaver.

Occasionally on winter nights we see the Northern Lights here in the Similkameen - never as spectacular as the photos you see of them blazing further north, but nevertheless, a wonderful sight. We also have a light show called the Okanagan Arch that I have seen a few times stretching across the sky from northwest to southeast - usually in the summer. One of our sun who is also a sky watcher can be counted on to alert us to the Arch, and he has had some correspondence with more scientific people from other places who are interested in it.

oops - that would be one of our 'sons'

You speak of wonders other-worldly to me and I enjoy it very much!

I've just called to my husband and told him about the Northern Lights, so the next clear night we'll drive out to the Devil's Beef Tub where we once saw the milky way to look. How exciting this is, I just assumed they were the sort of thing other people saw, and now I have a chance!

The photograph of the church window is super.

Good luck. I hope you see them every night.

I once briefly and vaguely saw the Northern Lights from the Lune Valley near Kirkby Lonsdale. A man who had been watching them for a few minutes said I'd missed the best of the show. Good luck with your light spotting!

Thanks for the comments. If I see the lights make no mistake I shall broadcast it to the world!!

Good luck with seeing the Northern Lights. I would love to see them but am much further South than you. Did you know you can take flights to try and see them. www.auroraflights.co.uk has details. There is a preflight talk followed by a couple of hours flight-time. Of course there is no guarantee of seeing them but its something we've considered.