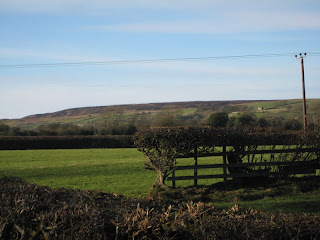 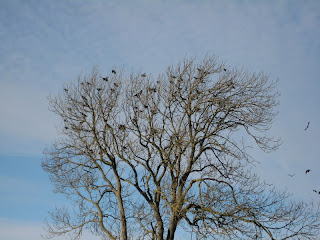 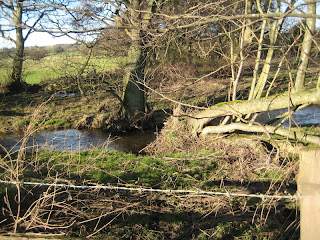 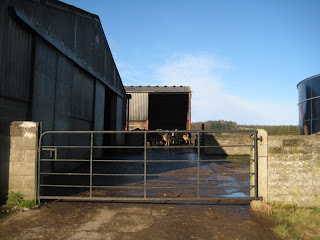 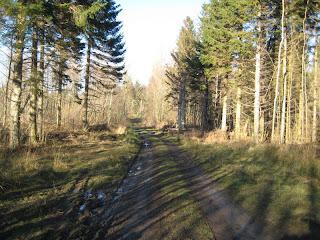 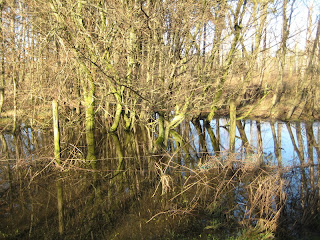 Before I tell you about yesterday's walk can I just say thank-you to all who joined in the Kindle debate. On the whole most of you came down in favour of books - maybe that just means that Bloggers are more keen on books rather than that it is a general opinion. But it was really interesting to read your comments. Thank you so much for joining in.

I cannot tell you what a lovely day it was here yesterday. After an early morning frost it was a clear blue sky all day, little or no wind and a warm sun. I was on my own all day as the farmer was out on the last pheasant shoot of the season (it ends on January 31st for another year thank goodness. The pheasants who come to our bird table are safe for another year).

I made a batch of parsnip, onion and apple soup to warm the farmer up when he came in at tea time, ate my lunchtime cheese toastie (which I now make in the toaster in this little brown bag I bought - clever stuff), and then Tess and I walked the two miles to Forty Acre Wood and back.

The woodland ride had dappled sunlight. In the distance were the pheasant feeders for this is serious pheasant-shooting territory, with parties flying in from all over the world to pay enormous sums of money to take part in the shooting of birds (for what one asks?). There were plenty of birds round the feeders so let's hope they survive for the last few days of January, then they will be free to wander, mate, bring up their young and have another year of freedom.

Parts of the wood were under water. When I spoke to the farmer about it later on he informed me that there is a conduit (or cundith if you come from Yorkshire) under the road just there and it is blocked and needs clearing out. Still, it made a nice reflection of the trees.

I stopped to chat to our farmer neighbour, who was gardening in his front garden. With the typical doom laden voice only heard in local farmers he informed me that such days as yesterday, when they occurred in late January were 'real weather breeders'. His dairy herd are inside for the winter but they feed at a silage face which is outside. On a day like yesterday none of them wanted to go back in, so there was a bit of pushing and shoving as they all sought to stay outside in the sunshine.

The beck was full as it wound its way round before coming under the lane. The big old ash tree in the hedge between two of our fields was absolutely full of rooks. They must have been holding a 'parliament' - there was such a noise. I pointed my camera and took a picture but by the time I pressed the shutter half of them had flown. Away they went and in no time at all were over the moor.

Doesn't the moor look barren and brown? The brown colouring is heather - no green shoots there yet - or if there is they are too small to be seen from where I was standing. I was about two miles from the moor round by the road, but as the rook flies a mere few hundred yards.
Posted by The Weaver of Grass at 02:14

Good to see you too escaped the snow Pat! Yes we must come over on the motorbike soon! I need to get some thermal gloves to fit under my biking gloves then I will be sorted!

It's a bit off the point really, but every time I see the picture of your viaduct on your header, it reminds me of a ghost steam train going across it because of the strategically placed cloud in the photo. (The word verification for this comment is 'eflat' - the note of the train whistle?)

That was a lovely walk - just what I need. It's so good to know that even if the countryside still looks brown and barren, everything is going on underneath and just waiting for the right time to emerge into lovely greenness.
I have often thought that the high ground in your viaduct picture looks like a huge wave building up to break over the landscape.

the winter here has been bizarre, we get a dusting of snow and then it warms right back up. this week they predict temperatures we wouldn't normally see until April. The lakes are still open, a weather breeder around here, so we all keep our fingers crossed the arctic cold doesn't finally sink down, as we will be buried in feet of snow. I love getting these looks inside your life. thanks for sharing. and as to the new bookcase, it seems as soon as I get one it is full and I need another!!

I, too, will be so happy the hunting season is over for another year. I feel so uneasy knowing that deer hunters are perched on every corner.

Oh, I feel as if I was on your spring walk with you as I could just see everything you described. Your pictures are just lovely! We had a lovely and unusual rare sunny day yesterday as well....just delightful!

i'm lost in the tree reflections in the pond!!! thankyou!!! steven

Thank you for taking me with you again, it was a lovely walk.

What a lovely walk. I wonder what the rooks were debating at their parliament?

What kind of apples do you use in soup?

I love the photo of the beck and also of the dappled sunshine on the tree lined path.

I think we had similar weather to you on Saturday, and yes, it was lovely.

You are brave to title your post a 'Spring' Walk! I'm sure that sunshine was a treat for cows and humans alike!

It may be a little brown around the edges, but it looks like spring to me!!!!

Thanks for coming with me on my walk. Today there has been snow but luckily we are just below the snow line. From my kitchen there is a distinct line half way down the hill - snow above - green below.