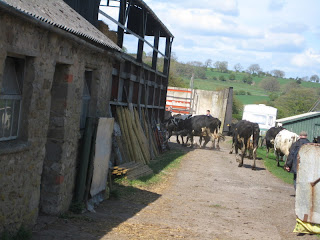 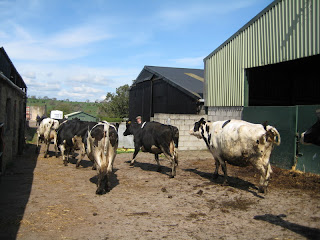 First the good news! The first few in-calf heifers have gone out into the fields today. They are not due to calve for a long time yet. They were separated as they stood in the loose housing and then the first lot were shepherded down the yard and out into the pasture. Unfortunately I was almost too late to photograph them and had no way of getting to the pasture to see them kicking up their heels. The rest - due to calve shortly - were left in the loose housing and they knew jolly well what had happened with the others because that is what alerted me to the whole thing - the noise of their mooing was frantic. "We want to go out too!!"

Now the bad - or rather sad - news. Friends called this morning and told the sad tale - all too familiar - of the lost duckling. They had been in the garden and had heard a tiny cheep-cheep and seen a tiny yellow fluffy duckling going up the middle of the lane, calling for its mother. They had tried to catch it to put it back on the beck but already, at only a day or two old, it is programmed to avoid humans and they couldn't catch it. Sadly I think we all know its fate. Mother ducks often have twelve or so ducklings but are lucky if two or three survive - foxes, stoats, weasels are predators, along with one or two of the raptors I suppose.
But it seems that if one gets left behind they carrying regardless - that is what they are programmed to do.

Last year a friend found a duckling caught in some water weed on the side of our beck. Together we took it to friends who rear day-old chicks under heat lamps. She put the duckling under there with a group of chicks - but still it died. These are wild birds and however sad it seems they really have to be left alone.

My son and his wife are away in Wales and yesterday he rang me - as he does every year - from the top of a Welsh mountain. This time it was one called Cnict - I can't find it on the map but it is in Snowdonia. One hears so much rubbish talked on mobile phones of the "I am on the train" variety that it is lovely for me (his mum) to hear "I am on top of a mountain." Not Everest I know, but a mountain nonetheless!
Posted by The Weaver of Grass at 06:59

Nature can be cruel can't it Pat?
I loved Kirby Lonsdale Pat - funnily enough I saw the cheese shop - will definately call in next time. We passed the gallery again too - I closed my eyes when I saw another lovely painting! lol! I did "wave" when we passed the end of your road too! We were in a hurry so couldn't stop. xx

Lovely post! I am also sorry what is wild is not available to us. But we must respect that our way is not their way. Love them from a distance.

So glad to hear your weather is nice enough to let the heifers out...always an exciting day:)

How lovely to get a phone call from the top of a mountain. Poor duckling - I hope the end was quick. That first lot of cows will be enjoying themselves and the very pregnant ladies will have to be patient a little longer - it wont do for them to start kicking up their heels just yet.

weaver it's so tough to accept the ways of the wild but there they are, the way nature is and should be. steven

the cows must be happy then! Poor little lost duckling though!

Look at me Ma, top of the world!

I made the mistake -- twice -- of raising baby birds that had fallen from the nest. I never worked so hard in my life. The third time it happened, I let nature take its course, as hard as that was to do. One time a friend handed me a baby woodcock because she thought it could stay with the baby chicks I had -- it died.

We never see wild ducklings by our ponds, although there are nesting pairs each year. Our domestic birds nest wherever they like on the property and rear large families, safely, it seems. Every so often a pair of Canada Geese will raise a little family outside our house, and that causes an eventual gigantic clean up!

Love your blog which I just found - we always stop in Leyburn on our trips to the dales (we stay in Carperby). Sad about the duckling though!

Not Everest - but good nonetheless. I'll be blogging about Cnicht myself in a few days.