Sorry I have been away from blogland. 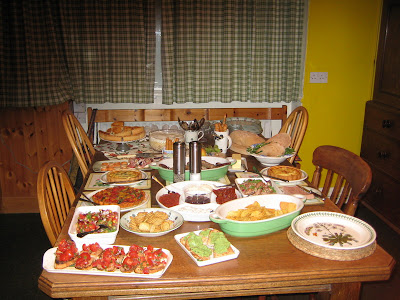 I have had friends staying so have been unable to get on to the computer to blog - sorry about that but here I am again Last night we had a little supper party and I took a photograph before we began to eat so that you could see what we had! I intended to take another photograph so that I could post 'before' and 'after' but I forgot all about it. Sufficient to say that we had a lovely evening with lots of nice chat amongst friends - isn't that what life is all about? (the empty plate in the foreground is waiting for the hot garlic bread to come out of the oven.)

You may remember that the other day I asked for your opinion on the subject of bus passes for the over sixties. The buses are subsidised and most of the passengers in our area are over sixty so that without these passengers there would be no bus service - should it be part of government cuts - and what about the closures of our libraries? I asked these questions and also asked readers of my blog who were not bloggers themselves to send me an e mail if they felt strongly about it. We also discussed the subject after supper last night.

I intended to post a blog today showing opinions. My goodness, is that difficult. Thank you so much for your response. In all, with e mails I have had almost fifty replies. Very heartening = that is the good news. The bad news is that every opinion is different, no two people really agree!

Opinions range from - nobody should feel entitled to a bus pass; in these days of cuts everybody should play their part; means testing should be brought back so that those who can really afford to pay do so; people should be asked to pay what they can afford; our generation have worked hard and paid our taxes and are now entitled to reap some of the rewards; everyone over sixty should be allowed to travel free on all public transport, including trains; I could go on.

On the subject of library closures - some people said they never used the library anyway as the books were never changed; others said libraries were a valuable social asset and should not be cut.

It is all so complicated. We do have a massive debt as a country - I feel (and I am sure most people over sixty would agree) that this debt/credit culture that has permeated society for the last twenty years or so is a lot to blame. Young people are somehow seduced into thinking that they have to have everything NOW and that the way to get it is to borrow the money - and pay it back bit by bit with appallingly high interest rates (do I sound like a grumpy old woman - I do hope so). And who has reaped the benefit? I suppose most people would say "the banks" - for banks do come in for a huge amount of criticism - rightly so, although I suspect most of us don't really understand any of it. Interestingly I saw that a new collective noun has been coined - "a cabinet of millionaires." And in the light of that I am tempted to ask what such rich people could possibly know about trying to live on the kind of incomes on which most people live?

But having seen the absolutely terrible images on the news this evening of events in the Middle East I can't help thinking we are so lucky to live in such a stable country - huge debt or no huge debt. (And any day now I expect petrol to rocket up again in price with trouble in the Middle East being given as the cause.)

What a complicated world we live in. At least we can moan about things, say publicly what we think, sign petitions with our real names - and all with absolutely no fear of retribution. And that is surely worth a lot.
Posted by The Weaver of Grass at 11:00

freedom of speech is certainly worth a lot, you're right there...

I think libraries are potentially a great resource but i find that the range of books can be limited, I know you can order them but that can take a while. These days Edinburgh is so full of excellent second hand bookshops that that's where I get my books,

I believe it is indeed pricless. As is dinner with friends (looks fabulously delicious by the way).

I want to come to dinner - when is the next one please? Hmm - that might be a VERY expensive dinner engagement.

You're so right - we're lucky to even have such things to complain about.

You know - after a long hiatus, I actually got an audio book from my local library the other day. I know that in my neck of the woods CHILDREN are the big library users - there are always tons of them in the library when I go. Which I personally think is fabulous :)

Freedom of speech, democracy, the Welfare State, education and civil rights for all independent of class or income, and 'free' public libraries are all part and parcel of a humane and civilized society - part and parcel of what it means to be British. Don't let us erode these things.

You can be as grumpy as you like as far as I'm concerned, Pat. Long live grumpiness!

I'm with you Weaver, only under different circumstances. Over here almost all our retirees have a car --even those in their late eighties and early nineties! I know they are a danger to themselves and others but then I think about what it would do to them if they didn't have transportation. We don't have the corner shop or safe public transportation; and family is often half a continent away. Neighbors are constantly changing. We've made a strange kind of world for ourselves with all the technology. Not only that, not many of our elderly people walk like they do in the U.K.

the divergence of opinion is a good thing in some respects - not so good if you want o be sure that the right thing (as you see it) comes to pass! however, i am concerned that the elderly, the young, the poor are being marginalized in my home country. services that support the needs of those who built the country up should not be compromised first. steven

Can't actually think much further than the dinner table, Weaver.

I do believe in some universal benefits though, and bus passes are one of them. Shared my library thoughts with you before!

I think we must be incredibly lucky here in Queensland, we have very active and much used Council libraries, which regularly acquire new books. Our libraries here in Mackay run many activities for young children, also internet classes for seniors as well as assisting teenagers with schoolwork - and we have about 40volunteers delivering books to housebound people every three weeks. I am one of those volunteers and it is so satisfying to be able to give so much joy to people unable to go out to choose their own books.
We don't have free bus passes here in Queensland, not sure about other Australian States, so really can't comment on that issue.

I think you are so right - it is so complicated, that's why I could never be in Government (and that's why Government need hundreds and thousands of civil servants - allegedly)

We are extremely lucky to live in this little debtridden country of ours. I do feel that members of the Cabinet are far removed from 'real life' as lived by we lesser mortals, and that they have no, or very little, understanding of it.
Your supper party looked so inviting and I recognised the plate waiting for the garlic bread! I have one just like it.

freedom of speech is priceless

Lovely picture of your feast! and garlic bread yum...
They routinely swap books around at our library, buy a few every month it seems their budget works at least in that dept. We also can borrow with inter-library loans. The Book Mobile goes back and forth here and there. (That is a volunteer position from what I have heard.) However hours of being open have slimmed down. And we have friends of the Library fund drives to augment the budget...
Bus passes ? seniors get a discount.
some senior centers run a van for doctors visits...all I can say from here. Thanks.

Not just the unrest in the Middle-East but that terrible earthquake in New Zealand as well.

The antiques dealer in me - my eye went straight to your Portmerion botanical serving bowl - lovely!

Feasting with friends...the best reason to leave your blog duties for a time! I'm so glad you had a wonderful time with them.

These problems are, indeed, difficult, and require great resolve to solve them with compassion and respect toward all citizens.

I pray that solutions to the problems all countries are facing today will come to pass in the most kind and compassionate way possible.

Well, I'm quite a simple soul, and find political things rather confusing. But I'm definitely a nexpert on lovely meals with pleasant friends! And yours looks totally delicious. Wish I could come too - I'd bring some Giraffitude cake!

Thank you for the comments and for joining in the debate.

Where do you put your elbows?

I can smell that garlic bread, my favourite. We only have a small library in our town although there has been talk of upgrading it although whether that happens now is another matter. I use it from time to time and would be more of a regular visitor if it had better stock. I love my bus pass but I love the freedom of speech that we have here far more.

In the Netherlands we have buspasses and trainpasses for over 65, we still have to pay a small amount of money. We can also use a taxi to other places all over the country. We have to pay 18 cents à kilometre, which is almost nothing.It's good that elderly people can keep travelling.

If push comes to shove and I would have to choose between things becoming very expensive (which could mean that I won't be able to afford most of them) OR freedom of speech, I would choose the last.
(I traveled in East. Eur. when communism reigned, and China, and to be silent about my own opinion is much more invasive to the soul!)