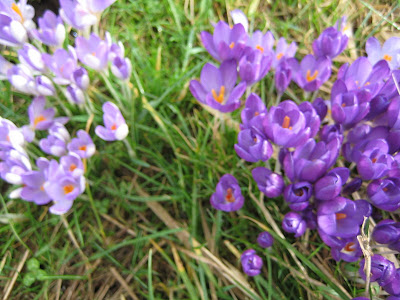 Putting a little footnote on poetry on my blog yesterday made me look up the histories of various poets. It really was most interesting.
The poet I mentioned was William Cowper who lived from 1731 to 1800 and who seems to be largely forgotten today.

Cowper came from quite a privileged background; his father was a vicar. He was educated at private school and then at Westminster but his school days appear to have been very unhappy. He was called to the Bar but suffered a severe mental breakdown. From then on his life seems to have been peppered with mental instability and depression.

John Clare was more or less a contemporary (1793-1864) and although he came from a very poor background, there were similarities in that his mental instability was so strong that he finally ended up permanently in what was then called an asylum, although within that environment apparently he had a lot of freedom.

The trouble was that by this time the fashion for rural/ploughman poets was dying out and the era of the romantic poet was being ushered in. Yet this time is also the time of Wordsworth (1770 - 1850) and Wordsworth was known to be a great admirer of the work of both Clare and Cowper. (Isn't words-worth a great name for a poet by the way?)

Reading up on the lives of these men does make me wonder - does a great poet need to be subject to mood swings and depressions and to be inward-looking? What do you think? I tried to think of a dead poet who did not fit into this category. Certainly Ted Hughes, and both Dyland and RS Thomas certainly fit the mould. Maybe TS Eliot is the exception - he always seems to be a cerebral poet to me. But then one wonders to what extent biographers try to 'dig the dirt' to make a poet fit the bill. What would our biographers make of us, I wonder? I suppose we all have some skeletons in our cupboards.

Anyway - I hope I am not breaking copyright when I write for you this lovely little Cowper poem which started off my rant. It comes from The Golden Treasury of Poetry, edited by Louis Untermeyer and Illustrated by Joan Walsh Anglund (pub: Collins)


The Nightingale and the Glowworm.

A nightingale that all day long
Had cheer'd the village with his song,
Nor yet at eve his note suspended,
Nor yet when eventide was ended,
Began to feel, as well he might,
The keen demands of appetite;
When looking eagerly around,
He spied far off, upon the ground,
A something shining in the dark,
And knew the glowworm by his spark;
So, stooping down from hawthorn top,
He thought to put him to his crop.
The worm, aware of his intent,
Harangued him thus, right eloquent
"Did you admire my lamp?" quoth he,
"As much as I your minstrelsy,
You would abhor to do me wrong,
As much as I to spoil your song:
For 'twas the self-same Power Divine
Taught you to sing and me to shine;
That you with music, I with light,
Might beautify and cheer the night."
The songster heard this short oration,
And warbling out his approbation,
Released him, as my story tells,
And found a supper somewhere else.


###There have been a number of gas leaks down our lane this winter and the sides have been dug up time and time again. I feared for a little secret patch of purple crocus growing in the hedge bottom, thinking they may well have suffered. Today Tess and I found them, flowering merrily and even spreading. The snowdrops may well be beginning to lose their lustre but the hardy crocus is taking its place and gives me great joy.
Posted by The Weaver of Grass at 06:37

I like this poem. It's a bit like those of the French fabels of "de la Fontaine".
Thanks for your thoughts and comment.
I believe that troubles and trials poets inspire to write.

Words - worth! I've never seen that in his name before, love it!!

The poem is quite nice and makes me think about the world and all those who wish to do others harm and to conquer etc. and even on a smaller scale in personal relationships. Thought provoking for me today :)

No doubt beautiful poetry results from an increased sensitivity to one's surroundings. One sees, hears and feels more deeply than the average individual and sometimes that depth of feeling is difficult to bear. But oh the beauty that can be created!

I found a gorgeous swathe of crocuses yesterday, not quite open yet.

I believe that copyright lasts a maximum of 100 years which is why such projects as the Guttenberg can operate, and kindle can offer free copies of all number of classics.

I'm pretty sure a thorough survey would show that there are and have been as many perfectly sane as insane poets. Though I do think that in order to create great art one has to see the world differently from the norm, which is often enough to get one labelled bonkers.

Your spring seems so much closer than ours here in the midwest of USA. Your crocus gives ME great joy, as well.

I loved the poem by Cowper. It triggered a flashback to my sweet grandmother playing "Inchworm" on the piano for me when I was little.

I have wondered the same thing, Weaver--and writers: does one have to be a drinker to be a great writer? It sometimes seems to be the case.

No flowers here yet. They are just barely showing their leaf tips. Maybe soon we'll see something but it's turning cold again.

And Cowper--I like his poetry very much, but I never heard of John Clare that I can recall. And Eliot does nothing for me at all. maybe I'm just too rustic for him?

It is sad to think that the man who wrote this charming lighthearted poem, ever suffered from depression. His work must have raised the spirits of so many people. They say that suffering is good for the soul - maybe it is good for poets. Certainly it might heighten their perception and sensibility.

Fascinating post Weaver, and food for thought indeed. I am a big Cowper fan, although he was rather prolific and there is some dross amongst the diamonds.
The snowdrops here are showing full now, but though I have hints of crocuses none are in bloom yet. And my favourite dwarf irises (the most intense mauve-blue) are just coming up...

What a delightful poem! Thank you! :0)

That poem made me smile. John Clare has that childlike delight in nature too. Maybe that is the secret, that a poet must never let the child within him/her die?

When we think of the poets, writers and artists who lived " on the brink" , we sometimes forget that they also had months and years of true happiness and responded so positively to the beauty of the world around them. Virginia Woolf is a case in point. We think of her "madness" and her suicide, yet, her diaries are full of good moments, deeply positive thoughts and simply happy days.

Re: TS Eliot- maybe the strain and stress of living with his first wife`s mental illness was a catalyst for some of his darkest writings?

weaver that's a poem with a sense of humour! it's so cool to see what survives the winter and the encroachment of man's needs. steven

This is what I love about blogging - we learn so much from those lovely people we meet along the way!
Raising a glass to you!
Dxx

Thank you for the comments - pleased you liked the poem - a simple message beautifully expressed I think.

the poem is well out of copyright, since Cowper died so long ago...