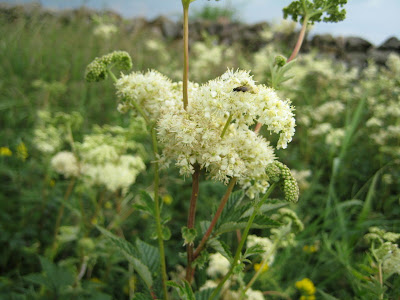 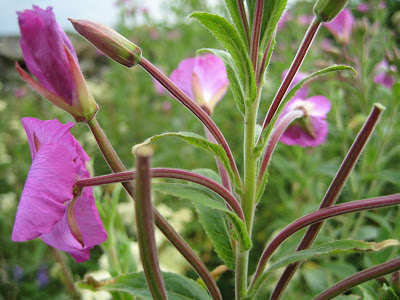 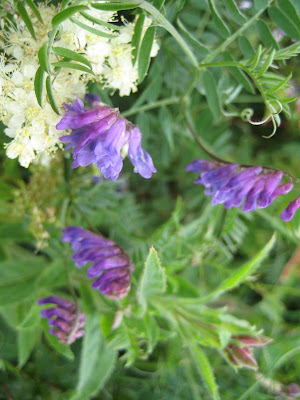 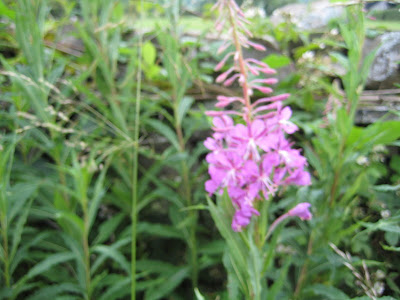 The Times is 225 years old today - so happy birthday dear old Times - what would I do without you on my breakfast table each morning; how would I keep my mind active without your 'Mind Games'; how would I keep up to date with the news; how would I find interesting stories for my blog? Today's Times is the 70,000th edition and it is now, officially, the longest running English-speaking newspaper in the world. So well done for that!
On the rain front - well, as usual in this country, once it starts it doesn't know when to stop. We had more heavy downpours yesterday and another this morning during the farmer's walk round the fields with Tess and Tip. The garden is delighted but not sure about the climbing roses, which look decidedly dejected. Still, it will make the hay grass grow and the beck is now full, so neighbouring farmers will be pleased.
But note - today is Saint Swithin's Day - whatever the weather does today it will do for the next 40 days according to legend. This morning I read the origin of the legend: apparently Swithin was Bishop of Winchester in the 9th century. He was a very humble man and insisted that when he was to die he was to be buried outside the cathedral, where his grave was exposed to the weather. A century later his remains were transferred inside the cathedral and it rained and rained for weeks afterwards. And so the curse arose.
Well, we shall see. Every year people say in dolorous voices 'it's St Swithin's Day' but I think we all forget about it a week later.
Walking round the fields yesterday I was pleased to see the next batch of wildflowers in full bloom. Meadow sweet is everywhere, rosebay willow herb is just coming out here and its cousin, great hairy willowherb (not such a nice name, is it?)
is joining it. The purple and yellow vetches are everywhere - I have never seen them so prolific round here. The other wild flower which is in bloom is the meadow cranesbill - I wasn't able to get a photograph of that so I shall post it later when I have been for another walk.
The sun streams through the hall window as I write - maybe it will be sunny for Saint Swithin after all.
Posted by The Weaver of Grass at 01:11

Lovely flower pictures , but dear St Swithin a gentle shower perhaps the order of the day?
Here, another mid-30's (nearly 90°F I think) - the threatened thunder will arrive today we are being told. It'll come with a bang I expect. Unlike your flowers we're all wilting. Yesterday another power cut on the underground. People having to walk through tunnels. Curiously in the heat wave the demand for electricity soars.

Enjoyed your post, Weaver! Always love to see what's blooming over your way. Such lovely wildflowers.

I am watching the sky like a hawk! I have my washing on the line after a morning of rain - so AT THE MOMENT all seems Ok but you never know do you?

My American standards, that is one old paper! Lovely garden pics!

Thank you for the Yorkshire wild flower photographs.Happy memories. They are quite different from those around here.

A blustery, showery day here. We badly needed the rain but forty days would be overdoing it!

We drove home in torrential rain last night from just north of Newcastle. It came as a shock after warm sunny weather down south! I wouldn't want to think St. Swithin had that in store for us!

Enjoyed catching up with your dreaming tiny grass and now-world-famous boiler men! Hope the beck manages to remain topped up.

Beautiful wild flower pictures Pat - I love vetches. We drove through torrential rain this morning, it was quite frightening as the visibility was minimal at times. I think most of us are promised a fine weekend so I hope you get the chance for a cuppa in the garden. Happy Birthday to The Times - quite an achievement.

Gosh, do I miss the old rosebay willow herb
all over Essex like the weed it is but so very evocative.

Bucketing rain here which is splendid as we needed it very badly.

I hadn't thought of St.Swithun for several centuries.....!

love your wildflower pics! To me they speak so much of summer. Oh, and not to forget - your beautiful header!

I didn't know about St Swithin, so I found your story very interesting

What a lovely post Weaver. It's been raining too long here as well. We prayed for rain and look what happened. The trouble is, the flowers love it - but so do the weeds! The forecast isn't good either. Maybe it'll be a good August!

I have always heard of St, Swithin's Day but could never quite figure it out. Thanks for the explanation.
Tucson only has one newspaper now after our afternoon paper had to close and go on the internet.
You are very lucky to have a newspaper with such a wonderful history.
cheers, parsnip

I'd forgotten about St. Swithin's Day! We had RAIN today! We're not supposed to have rain after April, but we had a brief thunderstorm that was not so brief further east.

lovely photos, I really like the willowherbs despite them being though of by a lot of people as weeds.

Looks like it will rain for 40 days then, nothing unusual in Scotland!

We've just had several bursts of torrential rain. Hopefully in its wake there might be some of the abundance that you found in your fields, Pat. Apart from the rosebay willowherb, our fields are a bit sparse still.